On Thursday, 13 September 2018, the Society for Threatened Peoples (STP) and the Unrepresented Nations and Peoples Organization (UNPO) co-organised a side-event entitled “Unrepresented Women’s Rights: Inclusivity and Intersectionality” on the occasion of the 39th Regular Session of the United Nations Human Rights Council (HRC). The side-event focused on the inclusivity of women from unrepresented nations and peoples, their roles as activists within and without their communities and the struggles they face when trying to stand for the rights of women from their respective groups, often having to choose between joining the liberation and human rights or the feminist movement. Acknowledging this dilemma and pointing out that indigenous and minority women should not be forced to make this decision in the first place, the side-event provided an opportunity for them to share their experience and recommendations as both activists and members of indigenous or minority communities, as well as to encourage best practices in terms of gender equality and women’s empowerment by highlighting the need for inclusiveness.

Opening remarks were given by Lucia Parrucci, UNPO Advocacy Officer and also moderator of the event, and Hanno Schedler, from the Society for Threatened Peoples. Ms Parrucci highlighted how indigenous and minority women face unique struggles, which have their origin not only in their status of belonging to an oppressed group of people, but are exacerbated by their gender. She then reminded the audience that although those women are often framed as passive victims who require “saving”, this image does not reflect what they truly are – activists, human rights defenders, educators, protectors and leaders who work to promote their causes. She then pointed out that the rise of the concept of “intersectionality” has created opportunities for indigenous and minority women to have more visibility and advocate for themselves and their work, highlighting the necessity of creating solutions that will embrace both women’s and indigenous and minority rights, in order to allow for the respect of all.

After the opening remarks, Director of the Balochistan Human Rights Group, Monireh Shirani, took the floor to discuss the oppressive reality Balochi people endure in Iran, where minorities are denied access to basic human rights they are entitled to according to both national and international human rights norms. In spite of the region’s wealth, Baloch face environmental challenges and lack access to drinkable water, both of which are largely due to state-sponsored water mismanagement and disappropriation. Ms Shirani highlighted that women and girls are especially vulnerable, as they are frequently in charge of fetching water and consequently face the challenges and dangers associated with it. She stated that – although Baloch women and men have historically worked side by side – women in Iran are constitutionally regarded as inferior to men, which poses another obstacle. She reminded that Baloch women do not only endure poverty, but also have to live with a constant sense of insecurity, partly caused by the Iranian government excessively using executions against members of national minorities. Despite of this unfavorable context and minority languages not being part of the national curriculum, Ms Shirani affirmed that Baloch women make deliberate efforts to complete their education, thereby fighting the systemic oppression. 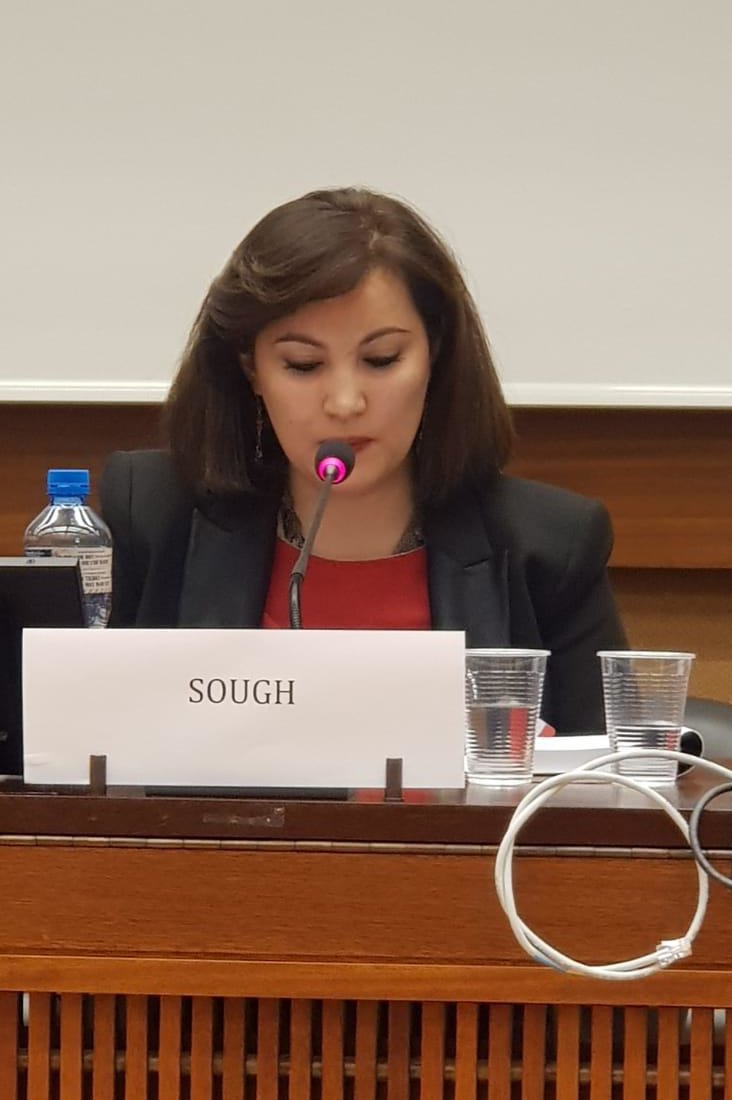 Ms Shirani’s instructive talk was followed by Soraya Sough, Deputy Minister for International Relations of the Provisional Government of Kabylia, who introduced the Kabylia indigenous people of Algeria, where they were previously under the colonial control of France. After over 50 years of Algeria’s independence, the living conditions of Kabyle communities are still subpar. Most Kabyle women are responsible for fetching water, having to walk several miles on dangerous tracks. They usually have no gas for heating or cooking, but rather continue to rely on wood they find in forests. Ms Sough highlighted the tragic fact that most Kabyle women are discriminated every day of their lives for not being Islamic or speaking French. This leads to them being disproportionately affected by violence and other violations of their rights, while, at the same time, not having access to legal defense mechanisms to protect themselves and hold perpetrators accountable. Ms Sough stated that Kabyle women are further denied public and political representation, which renders them virtually invisible in the official sphere. Ms Sough ended her speech by calling on the audience to acknowledge the peaceful resistance of the Kabyle people against the Algerian government and by stating that women are determined not to be victims and to fight against their oppression.

Shahrezad Ghayrat, Project Assistant at the World Uyghur Congress, then took the floor to elaborate on the situation of the Uyghurs of East Turkestan. First remembering the invasion of the Chinese government in 1949 and the consequent story of systematic oppression of her people, she then described the Uyghurs’ current, dire situation. Ms Ghayrat in particular highlighted the so-called “re-education” camps, where Uyghurs are imprisoned, subjected to various kinds of rights violations and forced to denounce their religion and identity. Sharing her experience as an activist for her people, she stated that – although her actions put her loved ones at risk – she believes in the importance of her advocacy work as well as of the role she plays by speaking out for her community, culture and identity. Ms. Ghayrat also mentioned the important work of other women activists, highlighting that, in spite of the many challenges they face, they do play an important role not only in human rights advocacy, but also in the construction and sustaining of democracy, which renders gender equality and women’s empowerment an essential component of human rights advocacy work.

The fourth panelist, Marjorie Awemo, Ambazonia Governing Council, spoke on the situation of the unrepresented women of Ambazonia, in Southern Cameroon. She stated that in spite of the lack of recognition, representation and resources, Ambazonian women have actively worked for their rights and have even created sources of micro-financing by founding women’s support groups. According to Ms Awemo, women in Southern Cameroons have also fought cultural oppression and defended young women’s right to education which is the most important path to their empowerment. She continued to point out that Ambazonian women are disproportionately affected by violence perpetrated against the community, falling victim to sexual assaults and repressions. In spite of their vulnerable situation, Ms Awemo affirmed that, rather than discouraging them, their suffering and agony further encouraged them to fight for the liberation of their land. She continued to highlight that Ambazonian women do not only struggle to alleviate the suffering of their people, but also raise awareness within the international arena of the humanitarian crisis and the mass human rights violations that are happening in their country. Ms Awemo ended her speech by pointing out that, just as many other women from minority and unrepresented groups, Ambazonian women are working to be actors of change – not victims.

Ms Parrucci concluded the discussion by pointing out what the different cases described by the panelists have in common: the fact that they try to find solutions to help and empower themselves to overcome their problems, invisibility and the sense of insecurity. She stressed that the women who had spoken for their communities at the event have already created some sense of security, simply by being vocal and making active efforts to change their peoples’ reality by embracing both human and women’s rights.