A Long Way to Free and Fair: The 2018 Pakistan General Elections

Last Wednesday, 25 July 2018, fifty-two percent of Pakistan’s registered voters participated in the country’s third democratic elections. Although there were high tensions leading up to election day, many flooded the polls, sometimes waiting for hours to vote. While some have congratulated Pakistan for its progress towards democracy, there are still a number of events that undermined a free and fair election process. Pakistan still has much work to do and a far way to go before it can be considered a stable, true democracy.

Head Observer of the European Union and Member of European Parliament, Michael Gahler, stated that although there were positive legislative changes made due to the new Elections Act, the EU Elections Observation Mission “consider that the electoral process of 2018 was negatively affected by the political environment”. In addition, the EU Election Observation Mission (EU EOM) released a statement last week dubbing the 25 July 2018 “election process was overshadowed by allegations of interference, restrictions on freedom of speech and the media, and unequal opportunities to campaign”. Furthermore “despite the new legal framework [to encourage women’s participation], a full level playing field for women, as well as for minorities and vulnerable groups, is yet to be realized”. 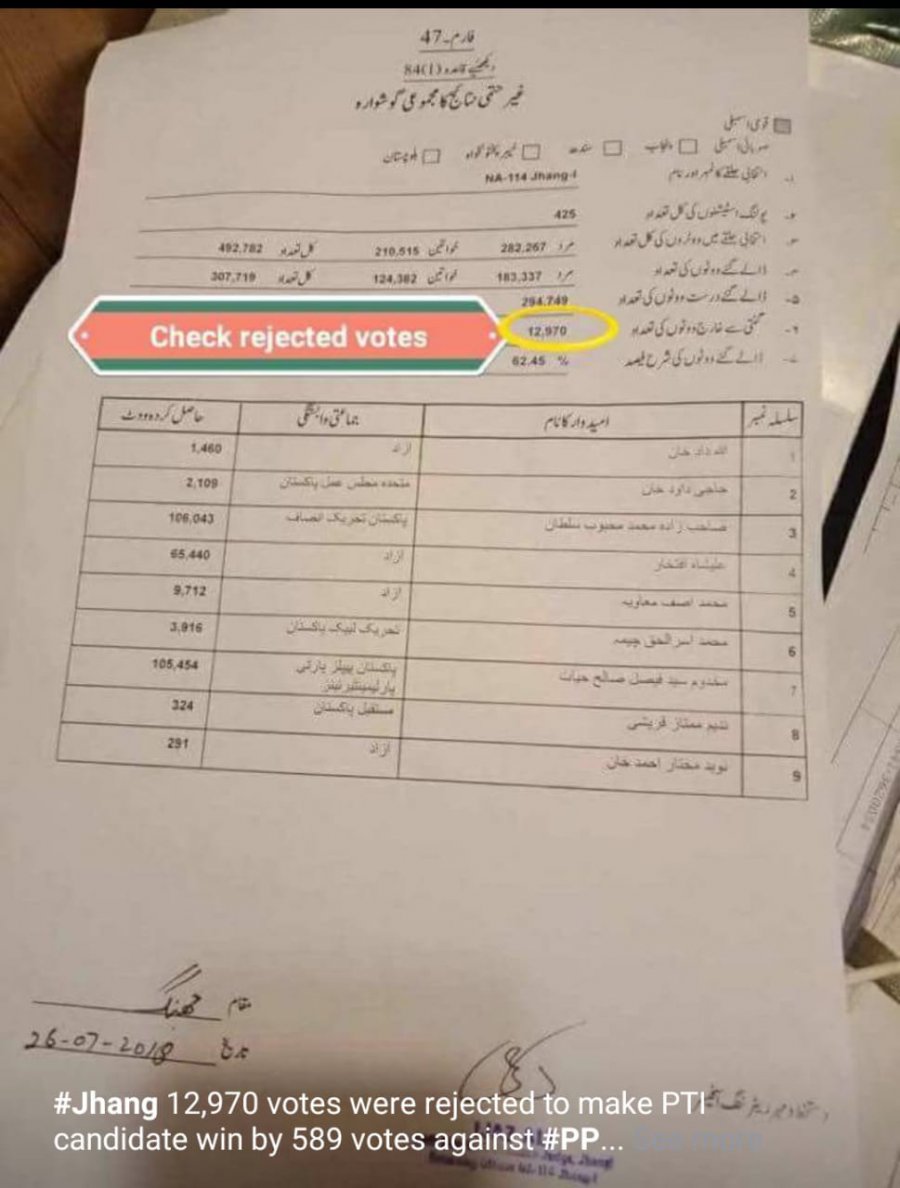 Despite having more than half of the country’s registered voters turn out in the polls, there were numerous violent threats leading up to the elections. Aside from the corruption of the political process and the violence meant to deter voters, minorities and women were widely left out of the democratic process, and the media was censored which then led to further self-censorship of the press.

More than a few international non-governmental organisations have released preliminary pre-election reports pointing to heightened tensions, instability, a prevailing level of growing sectarianism in the political sphere and terrorism, murders, and killings. Although terrorist Islamist organisations are generally outlawed, such as that of Aurangzeb Farooqi, the leader of Ahle Sunnat Wal Jamaat (ASWJ) and Shafiq Mengal of Baloch Musalla Difa Tanzeem, many managed to infiltrate Pakistan’s political sphere and establish individual parties based on their own values, as The New York Times reported on 17 July. Such organisations then used their political parties as platforms to campaign with a focus on sectarianising Islam for political gain, as they attacked liberal values and progress. In such cases, opponent political parties felt the need to respond to such discourses and ended up making concessions on their values to balance off the political gain of Islamist campaigns. Such concessions were made for fear that they (opposing political parties) would not be able to secure constituents or oppose the pressure of these extremist groups.

All in all, this systematically pushed back the progress that had been done to install liberal values and democracy in Pakistan. In conjunction, various Pakistani media sources highlighted the heightened risks of violence and instability in the atmosphere, that likely to further discouraged potential voters in the 25 July elections.

However, infiltration of terrorist organizations in Pakistani political parties is not where the corruption stops. The BBC reported that the distribution of the national newspaper, Dawn, was halted through certain areas of the country. Such a decision was made after Dawn published an article that was critical of the Pakistani military. Although the military claims to have not interfered in the distribution of the newspaper, there is good reason to think it is the root cause, as there is history of a comfortable lien between the Pakistani military and governing political parties in years past.

Furthermore, in many constituencies, thousands of votes were rejected and winning candidates only won by a few hundred votes. While worrisome, it can hardly be surprising, since the EU EOM was given merely a few weeks to prepare for the election process — a stark contrast to the months of preparation that have taken place in past years, headed by MEP Michael Gahler. However, this was just the tip of the iceberg of irregularities of the 2018 Pakistani general elections. As it took three days following the elections to announce the final results, it is highly likely that vote rigging took place on a massive scale. It is also worth noting that over five percent of the votes in the province of Balochistan were rejected by the election commission. 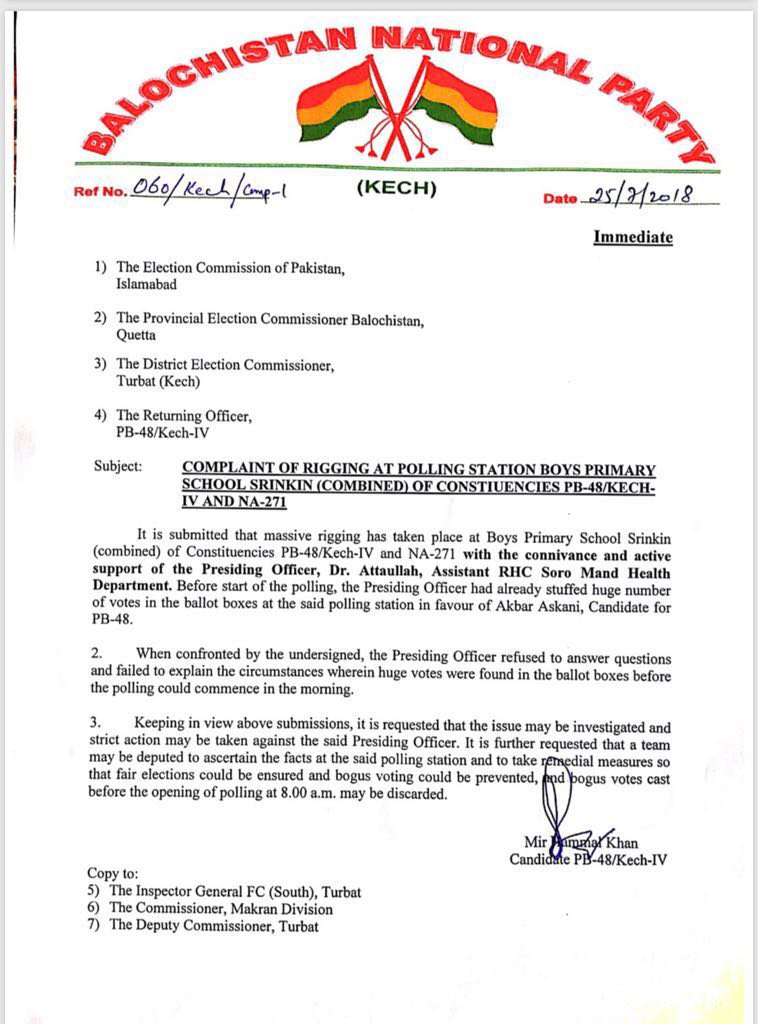 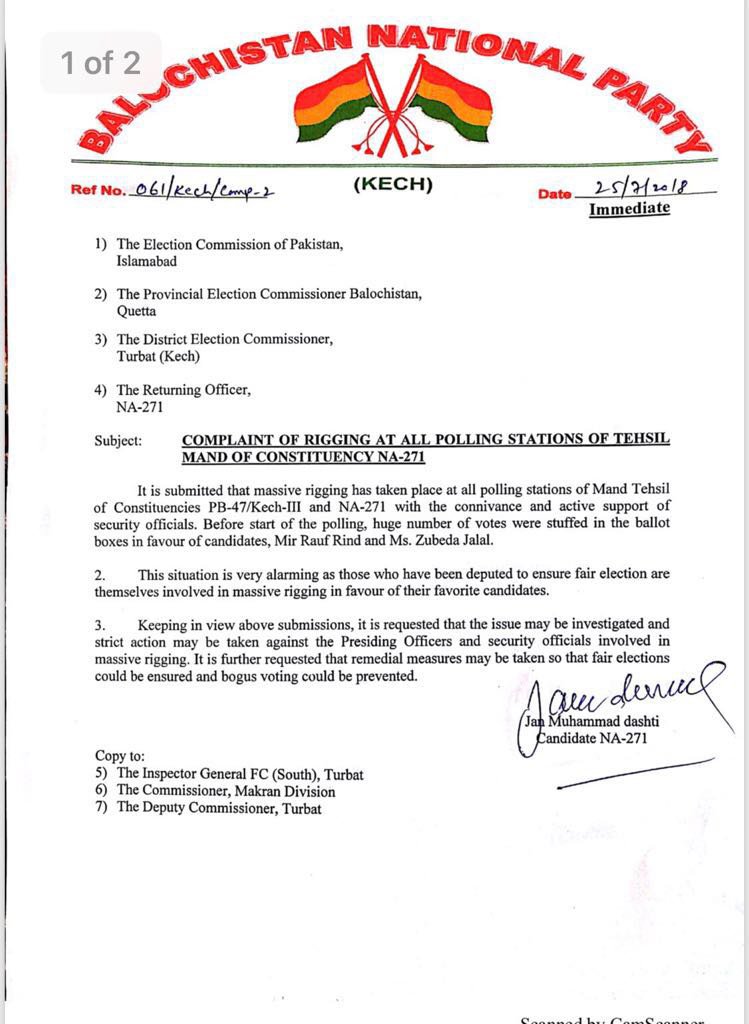 In addition, observers of the Pakistani elections were not at all present in Balochistan, although it represents forty percent of Pakistan’s landmass. Despite the fact that news channels and votes showed the Balochistan National Party (BNP) winning a number of seats, the results were withheld and the Party was robbed of twelve seats. Had the results stayed as they were when first announced, BNP would have been the largest party with nine seats in the national assembly.

BNP is far from the only political party that has complained about lack of freeness and fairness in the 25 July elections; many others have come out with statements, critical of probable vote rigging, heightened security threats, and instability having a negative impact on the election process. In one of the constituencies, it has been reported that the District Commissioner even congratulated the winning candidate and presented a garland to him, but the winning candidates were not given the so-called Form 47 notification, which all parties have complained about. In many other constituencies, ballot boxes were shifted to the garrisons before the results were changed and candidates were not even allowed in the polling station where the votes were being counted.

In light of the violent incidents, allegation of electoral frauds and systematic persecution of minorities, UNPO calls upon the international community to refrain from issuing official statements commending Pakistan’s democratic “improvement”. In future elections, to ensure stability, security, and democracy in Pakistan, the country and future elections observers, must push to be inclusive with regard to the minorities communities, namely that of the Baloch and the Sindh, as well as women and disabled voters.