A meeting of the Uyghur Friendship Group, hosted by MEP Csaba Sógor (EPP), discussed the deteriorating human rights situation in China. Special guest and scholar Dr Rachel Harris underlined the increasing securisation of the Chinese government and the growing concern for Uyghurs detained and kept in so-called re-education camps. The Vice President of the Friendship Group, MEP László Tőkés (EPP), also made an appearance, restating his solidarity with the Uyghur people and their struggle for equality, respect and human rights.

Following MEP Sógor’s opening remarks, MEP Ramon Tremosa voiced a message of solidarity with the Uyghur people, saying “your fight is my fight”, with regard to the situation of the current self-determination struggle in Catalonia.

Dr Rachel Harris (SOAS) presented on the recent and current human rights violations that are being carried out against the Uyghur community in East Turkestan, officially known as the Xinjiang Uyghur Autonomous Region, in China. As Harris noted, the Chinese anti-Uyghur position has grown more oppressive in the last two decades, following the September 11thattacks and the “war on terror” policy, which the Chinese adapted to their needs. In applying such a policy, the Chinese have implemented a wide range of invasive and discriminatory protocols for the Uyghur community, from violent government response to peaceful protests to passing legislation that outlaws wearing a veil, growing a beard, eating halal or fasting, to dubbing those who refrain from drinking alcohol or smoking as religious extremists. Dr Harris also expressed concern on the securisation of the Chinese state and the use of checkpoints, facial recognition software, and random examinations as means to restrict Uyghur movement within and outside of the Xinjiang province.

However, Harris highlighted the most alarming trend in the oppression of Uyghurs and Uyghur culture: the growing number of “re-education” indoctrination camps that have been opened. In these camps, Uyghur prisoners are forced to wake before dawn, sing patriotic songs in several moments of the day, and apologize for their dress, prayer and for teaching their religion to their children. Those who comply with denouncing their identities and culture are said to be rewarded, while those who resist are often put into solitary confinement and even denied food. When Uyghur relatives living overseas inquire about their loved ones, these inquiries are perceived as threatening and therefore endanger their family members of being detained and placed in “re-education camps”.

To conclude, Harris denounced Chinese actions, stating “the anti-extremism campaign in the Xinjiang Uyghur Autonomous Region is an unprecedented example of coercive social re-engineering that seeks to discipline and control an entire ethnic group”. 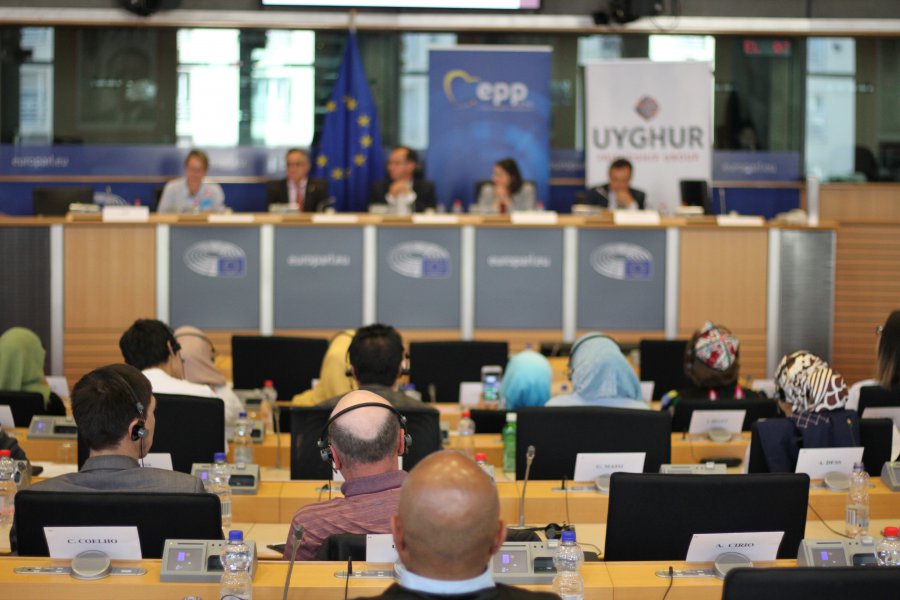 Mr Dolkun Isa followed by leading a moment of silence on the 9th anniversary of the Shaoguan incident on 26 June 2009, where groups of Han Chinese targeted Uyghur co-workers, violently killing at least two—an event that triggered the July 2009 Urumqi riots. Isa made personal remarks on his personal situation of recently losing his mother and being unable to contact his father and siblings for several years. Isa stressed the urgency of the worsening situation, requesting the EU to take a bold stand, and the European Parliament to pass resolutions that would pressure the Chinese to end such harmful policies.

MEP László Tőkés, Vice President of the Uyghur Friendship Group, made closing remarks, updating participants on the meetings of the European Parliament Human Rights subcommittee. Tőkés reiterated his support by saying “whenever action or solidarity is needed, I hope you see that you can count on us”.