On 2 June 2018, the Unrepresented Nations and Peoples Organization (UNPO) together with the Khmers Kampuchea-Khrom Federation (KKF) convened a successful conference at the French Senate in Paris on the human rights situation of the Khmer-Krom indigenous people. The conference, co-organised and hosted by French Senator André Gattolin, represented a key moment in the Khmer-Krom's path to recognition. A UNPO report on this issue has also been distributed during the conference.

After KKF Chairman Mr Vien Thach opened the one-day conference by giving a hopeful speech, Senator Mr André Gattolin expressed his concern regarding the well-being of the Khmer-Krom people and reaffirmed his engagement towards human rights. Former KKF Chairman Mr Kim Thong To then underlined his dedication to the KKF and the major importance that the conference represents for the federation. Finally, UNPO Representative Ms Fanny Delemer gave her vision of the role of the UNPO on indigenous issues and shared her concerns and hopes regarding the recognition of the Khmer-Krom as an indigenous people. 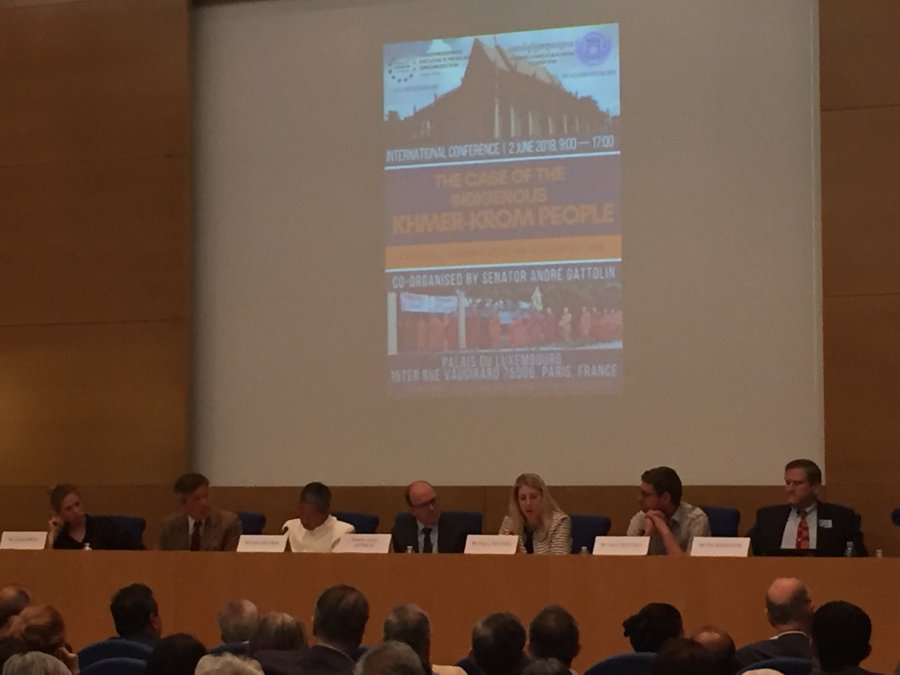 Our introductory speakers exposed their views on how the history and strategic location of the Khmer-Krom people brought about a certain number of challenges for the community. Doctor Philip Taylor, a professor and researcher at Australian National University, shared his experience working with the Khmer-Krom and provided an extensive overview of the indigenous people’s historical background. Ms Roshane Saidnattar, as a filmmaker, then gave an inspiring speech in which she shared some testimonies of Khmer-Krom individuals. She also gave an account of their struggles and dedication for the survival of the Khmer-Krom culture.

Then, our panelists questioned the state of the Four Freedoms, namely freedom of speech and worship and freedom from fear and want, in Vietnam. Mr Phil Robertson, the deputy director of Human Rights Watch’s Asia division, made a quite negative assessment of the current human rights situation in the Mekong Delta, especially from religious and cultural standpoints. He stressed the need for more international cooperation on the matter and the use of the different mechanisms of the United Nations (UN) in that regard, citing the great opportunity represented by the upcoming and simultaneous Universal Periodic Reviews of Vietnam and Cambodia. Mr Sereivuth Prak, Executive President of the KKF, confirmed the violations and suppressions targeting the Theravada Buddhist monks, emphasised by a regular abuse of power on them from the authorities. He also echoed Dr Taylor’s intervention by mentioning the rise of the sea level that threatens the whole Mekong Delta region. To conclude this panel, Mr Daniel Bastard, Head of Asia-Pacific Desk of Reporters Without Borders, highlighted the fact that Vietnam is among the worst countries in the world in terms of freedom of speech. His organisation noticed that the arrests of grassroots and online activists had increased worryingly and that the sentences had become heavier, which led him to urge national governments to take action and to reinforce their advocacy efforts. 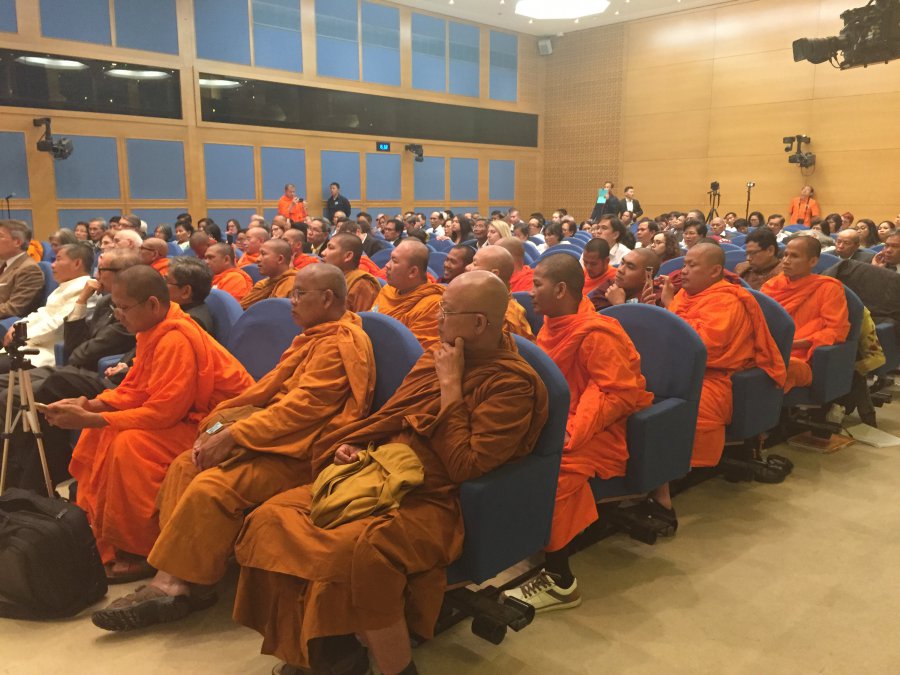 During the last session of the morning, Ms Tina L. Mufford, Associate Director of Research and Policy at the United States (US) Commission on International Religious Freedom, affirmed categorically that religious freedom in Vietnam is a fundamental right and should not be a privilege granted by the government, calling upon the US government to re-designate Vietnam as a country of particular concern. Finally, Ms Laura Harth, Representative to the United Nations for the Nonviolent Radical Party, Transnational and Transparty, reaffirmed the importance of advocacy to address those human rights challenges and blamed the use of religion as a tool to control peoples’ identities.

The second part of the conference raised the question of how to put the international human rights system to the service of the Khmer-Krom people. Ms Irène Bellier, an anthropologist at the School for Advanced Studies in the Social Sciences (EHESS) and Vice President of the International Working Group on Indigenous Peoples (GITPA), gave a detailed account of the evolution of the status and recognition of indigenous peoples as such at the international level. She insisted on the fact that it is of upmost importance to recognise indigenous people as such, also in order for them to be able to claim indigenous rights. Professor Joshua Cooper, a lecturer at the Hawai'i Institute for Human Rights and program director at the International Human and Peoples Rights Law Program of the INNES Institute in Vienna, strongly advocated for the inclusion of indigenous peoples when working on achieving the Sustainable Development Goals (SDGs). He also shared with the audience his precious knowledge of advocacy processes and opportunities at the UN. 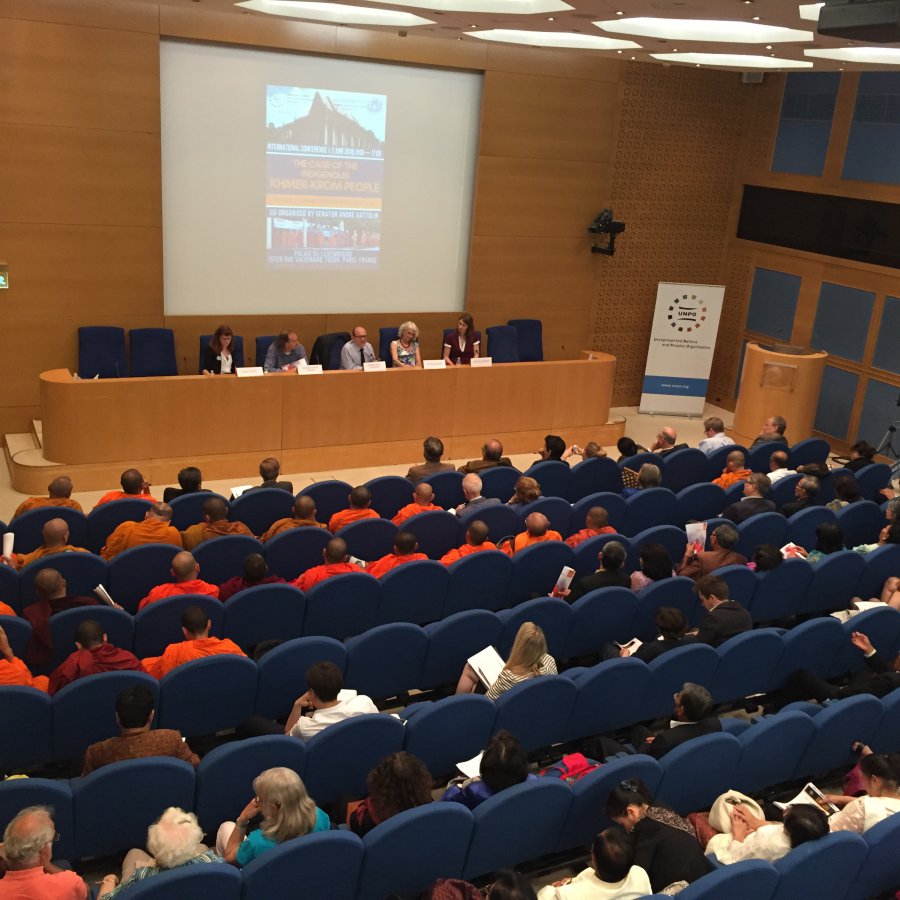 The last session of the day focused on the European Union (EU) and its Member States’ engagement for human rights. Ms Olivia Geymond, an executive committee member of the EU-ASEAN Perspectives Impact Group for the Young Initiative on Foreign Affairs and International Relations (IFAIR), stated that the EU was the new leader for the protection of the human rights of indigenous people and gave a few suggestions in this regard, such as that of more inclusion of representatives of indigenous peoples in human rights mechanisms. Senator Gattolin then closed the session by sharing his experience of struggling for human and indigenous rights as a French parliamentarian, stressing that he encountered many challenges but reaffirming his full commitment on these topics.

The conference ended with a brief allocution by Mr Sobert Son, a former Cambodian Senator, who thanked the co-organisers and host for holding this event. All speakers and organisers were offered a gift and certificate honouring their contribution to the Khmer-Krom’s cause by the KKF.

This fruitful conference was not only the occasion to raise awareness about the Khmer-Krom people but also to discuss paths to take and ideas for the future. The event was also a key moment for the Khmer-Krom people and the KKF, which represents them, as this conference was one of the biggest events that they had ever organised and was held in the prestigious and symbolic Palais du Luxembourg.

See the video of the morning session below: