On Friday, 11 May 2018, during a reception for Indian prime minister Narendra Modi, activist of the Alliance for Independent Madhesh (AIM) led a demonstration for a free Madhesh. During the peaceful demonstration, police arrested twenty-eight activists, simply for waving “Welcome to free Madhesh” posters and raising pro-Madhesh slogans. Activists as well as the Chief Minister of Province 2, Lalbalu Raut, have denounced aspects of the 2015 Constitution which are discriminating towards Madhesh. Activists have since been released, but the Madheshi community shares it disappointment on the speeches’ failure to address Madheshi concerns during the event and urge to put pressure on the Nepali Government to change the constitution.

This article has been published by myRepublica:

On May 11 [2018], Chief Minister of Province 2 Lalbabu Raut has said that the struggle against the 'discriminatory constitution' was still underway. Addressing a function organized at Barhabigha grounds in Janakpur to extend a civic reception to the Indian prime minister, Chief Minister Raut, who was speaking in Hindi, argued that the constitution promulgated in 2015 was discriminatory against Madhesi people and that they were still denied the rights of a provincial government as enshrined in the new constitution.

"Even today our struggle against the discriminatory constitution and for provincial rights is continuing'" Chief Minister Raut said, drawing the attention of the visiting Indian prime minister. India, which enforced an unofficial economic embargo to pressure the Nepal government to address the concerns of the agitating Madhesh-based parties about the constitution, has not yet officially welcomed the constitution.

The almost six-month economic embargo took Nepal-India relations to its low point in recent decades. Chief Minister Raut said they wanted to see people from all castes, classes and communities living without any discrimination just as Modi himself had arisen from the grassroots to make it to the post of prime minister of India. "We are an integral part of Nepal. But what we want is people from all castes, classes and communities making it to all the state structures based on their merit without any form of discrimination," he said. On the occasion, Chief Minister Raut alleged that discriminatory policy on the part of the state had left the Tarai-Madhesh an underdeveloped state.

"The state is biased against Madhesh. Madhesi people are forced to live in relatively worse poverty, unemployment, deprivation, exploitation and oppression due to biased mentality," he said.

Raut also raised the issue of floods and draughts faced by people in the region. He also drew the attention of Prime Minister Modi to finding a long-term solution to the problem as this was affecting people from both sides of the border.

A few activists of secessionist leader C K Raut on Friday showed placards advocating a free Madhesh at the civic reception organized at Barhabigha grounds. Although security personnel had carried out strict body searches to bar participation in the civic reception by any unwanted elements, a few participants managed to display placards advocating a free Madhesh as the function was underway.

Such placards were spotted in the middle of the crowd that waited to hear Indian Prime Minister Modi's speech following the felicitations. The placards read, "Welcome to "Madhesh. Free Madhesh". Police had arrested several CK Raut supporters as they chanted free Madhesh slogans along with the placards. Sources said police arrested several separatist activists from Saptari and other locations. Police officials were not available to confirm the arrests.

Chief Minister Raut declared in a speech to the crowd that “The state is biased against Madhesh. Madheshi people are forced to live in relatively worse poverty, unemployment, deprivation, exploitation and oppression due to biased mentality” as Modi was listening. Professor SD Muni noticed that the “The Constitution, or the Madhesi issue, wasn’t mentioned in either PM Modi’s joint statement or in any of his speeches during the visit” and declared that “The CM saying in front of PM Modi that their struggle for Constitution would continue sends out a big message to New Delhi”. 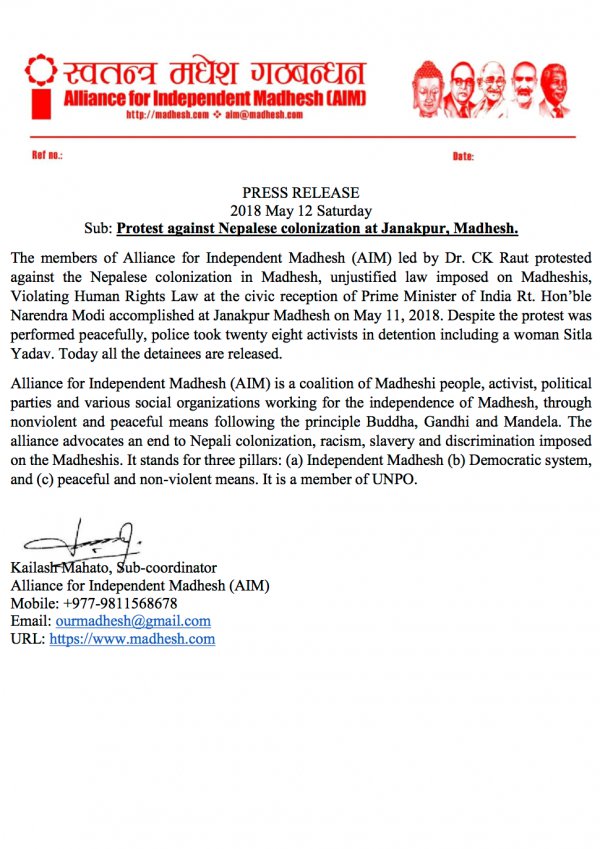 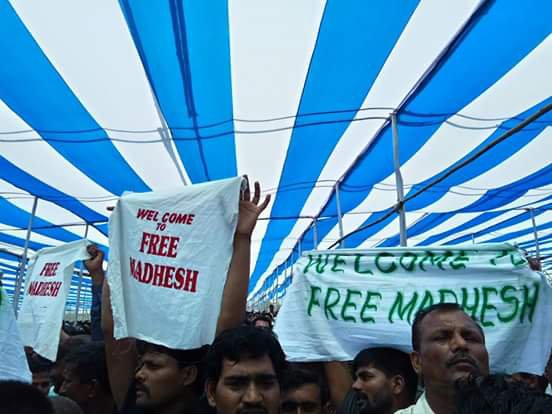 Cover picture : A Madhesi woman being escorted out of PM Modi’s rally in Janakpur after raising pro-Madhesh slogans during the Indian leader’s visit to Nepal last week