2,000 March for Freedom of the Uyghurs in Large-Scale Demonstration Organised by UNPO and WUC

On 27 April 2018, the Unrepresented Nations and Peoples Organization (UNPO) and its Member organisation the World Uyghur Congress (WUC) held a protest march in Brussels, Belgium to demand that China release one million Uyghurs having been arbitrarily arrested and currently being detained within Chinese ‘re-education camps’. The participants also demanded that China stop the destruction of the Uyghur’s cultural, religious and linguistic identity. This march brought together Uyghurs from many different diaspora groups from around the world and it is estimated that there were around 2,000 participants. 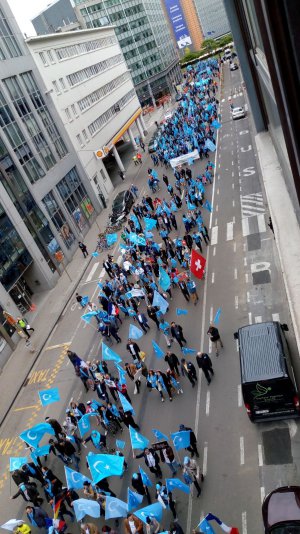 The march left from Meeûs Square, not far from the European Parliament, and led the demonstrators to Schuman square, where one of the European Commission’s buildings and the European External Action Service are situated. Protestors included concerned Uyghur individuals and families who chanted slogans calling upon the European Union (EU) to acknowledge the continuous use of the draconian ‘re-education’ camps for nearly one million Uyghurs in East Turkestan. East Turkestan is the name used by Uyghur communities for the Xinjiang region of China. These ‘re-education camps’, where one million Uyghurs are detained, function much like prisons where detainees are forced to undergo political indoctrination classes that aim to erode their Uyghur identity. The Uyghurs who are detained in these camps are not officially charged through a judicial procedure and themselves and their families are not provided explanation, making their detention conditions similar to enforced disappearance cases. Detainees are held for extended periods of time without any access to family or legal representation. Uyghur students who have studied abroad, or at times, family members of such diaspora or students can be targeted for detention.

The demonstration also called upon the EU to send an official envoy to investigate the situation in East Turkestan and the human right violations committed by the Chinese government against the Uyghurs. The numerous violations of human rights the latter face take place in a context of systematic repression of minorities by the Chinese government. Religious freedom, freedom of expression, language rights and the ability to move freely are just some of the fundamental human rights infringements the Uyghurs face.

Once the participants arrived at Schuman Square, a round of speeches were given by representatives of Uyghur associations, Uyghur leaders and supportive organisations among which UNPO. Below can be found the list of declared speeches:

A statement on behalf of the Society for Threatened Peoples (video)

A statement  on behalf of the Non-violent Radical Party, Transnational and Transparty (video)

A statement on behalf of the Assyrian Confederation of Europe (video) 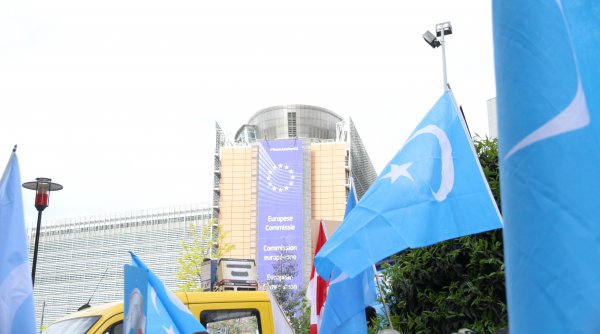