Mr James Her, Mr Gymbay Moua, and Mr Giar Kou Her from the Congress of World Hmong People (CWHP) conducted a series of activities in Washington, DC between 12-16 March 2018 to advocate for the Hmong in Northern Laos suffering from severe human rights violations perpetrated by the Laotian government. In addition to hosting a conference to raise awareness of this issue, the delegation met with Representatives and Senators to shed a light on this situation and gain the support of the United States in condemning the Laotian government for their actions.

On 14 March 2018, CWHP and UNPO organized a conference to educate the public on the issue of the Hmong in Laos and update those monitoring the situation on recent events.  Titled “Overcoming the Past: the Hmong’s Struggle to Shed the Legacy of the Vietnam War”, the conference brought together students, professionals, and academics to discuss the current situation in Laos.

After opening remarks by a UNPO representative, Dr John Prados from the National Security Archives at George Washington University began the conference with a discussion of how the Hmong people were historically “victims of place”. Their location in the highlands of Laos, Vietnam, and Thailand led to their strategic importance to foreign military imperialism over the years. Beginning with French intervention in the region in the 1800s, Hmong were recruited to serve the interests of global powers: first on the side of France, and then the United States.  Of course, this put them at odds with local government, especially since both France and the United States were ultimately unsuccessful in advancing their interests in the region. As the legacy of the US recruitment of the Hmong can be seen today in their continued persecution, the Hmong’s recruitment by global powers had negative implications for their future.

Mr Gymbay Moua followed this with a discussion of the current situation in the jungles of northern Laos.  Although more than 20,000 Hmong fled to the region after the Vietnam War, fewer than 1,000 remain because of the Lao government’s violent military campaign against this population.  Starvation tactics, indiscriminate shelling, and chemical weapons are all currently being used by the military against the Hmong ChaoFa people in northern Laos.  The people are forced into constant movement to escape death, which means that they cannot establish farms and must rely on wild roots for sustenance.  The threat of death or torture is always present, preventing many of them from surrendering to the government in exchange for a peaceful life.  The situation is steadily worsening, with the increased military presence in the region leading many to believe a final eradication effort is being implemented.  Finally, Mr Moua discussed the reaction of the Hmong diaspora to the situation, many of whom are afraid to side with the Hmong in Laos for fear of retaliation against their family still living in the country. 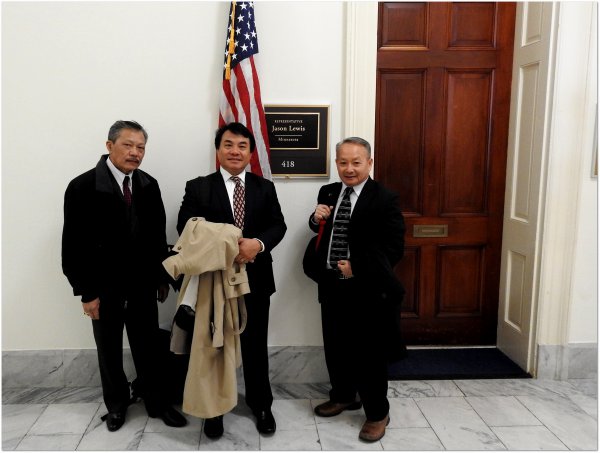 In addition to this conference, the delegation made a plea to the United States government in a series of meetings on Capitol Hill to aid the Hmong people in Laos in their struggle toward ending their persecution by the Laos government.  These followed similar meetings in March and December of 2017 and served to raise awareness of the situation in Laos to on Capitol Hill in the hopes that the United States would pressure Laos to uphold their commitment to international law and human rights.  The meetings were aimed at both legislators that had previously met with a Hmong delegation and legislators that had not yet heard the Hmong’s case.  The officials targeted ranged from lawmakers with large Hmong populations in their constituencies to those that served on committees relevant to the Hmong struggle in Laos.

To uphold the commitment to human rights throughout the world and to end an ongoing genocide, the CWHP and UNPO call upon the US government to condemn the human rights violations of the Laos military in northern Laos, provide humanitarian assistance to the Hmong, ensure the demilitarization of the region and the security of the Hmong people, and send an international observer to the region to accurately report on the atrocities being committed.