On Tuesday, 13 February 2018, Ethiopian officials freed Oromo opposition leader Bekele Gerba and six of his colleagues of Oromo Federalist Congress (OFC) from prison after all charges against the Oromian protesters were dropped. This move is a response to a three-day social boycott that had been going on in the region. Gerba had been detained following the start of protests in November 2015.

The following article was published by OPride:

Authorities dropped all charges against the freed leaders, a day after #OromiaStrikes blocked roads and staged rallies bringing the restive Oromia state to a standstill. The news of Bekele’s release was welcomed with warm and spontaneous celebrations across the country.

Bekele, secretary-general of OFC, was arrested in December 2015 at the height of the three-year long Oromo protests. He was initially charged with terrorism but his charges were later reduced to criminal offenses for allegedly inciting violence.

“He just walked out of prison. We have confirmed that all charges against him have been dropped,” Mulatu Gemechu, a member of the OFC’s leadership told Reuters.

The move is a response to growing protests demanding Bekele’s release and part of a promise Prime Minister Hailemariam Desalegn made last month to build national consensus and widen the democratic space. 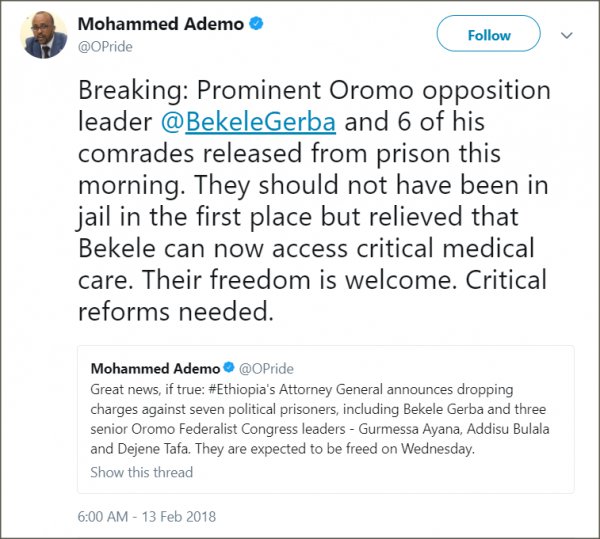