On 15 December 2017, demonstrations took place in the neighborhood of Alawi, in the city of Ahwaz, against marginalisation, land-grabbing and a planned river divergence that would leave surrounding agricultural land barren and cause severe sand storms. Protesters held signs calling for an intervention of the UN in the area and for the Unrepresented Nations and Peoples Organization (UNPO) to speak up on behalf of the Ahwazi People, who suffer under racist practices and policies by Iranian authorities. Earlier this month, similar protests in other areas of Ahwaz had been brutally cracked down on by Iranian security forces.

The article below was published by the Ahwaz Human Rights Organisation:

The Ahwaz Human Rights Organization (AHRO) received pictures of the demonstrations that broke out in Alawi neighborhood in the city of Ahwaz on Friday 15 December 2017 against the new water transfer projects, the continued confiscation of lands, arbitrary practices, oppression and marginalization against the Ahwazi Arabs.

The pictures showed banners calling for the intervention of the United Nations, and asking help from UNPO to be voice of voiceless people and condemned what is happening against the Ahwazi Arabs by the Iranian authorities. Ahwazi Arab citizens also protested against the new project of transferring water from Karun River the central Iranian provinces. 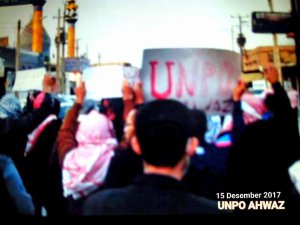 Representative of the region in the Iranian parliament earlier leaked a secret letter from the head of Iran's Environment Organization that authorized transferring the amount of one billion meter cubed of water in addition 3 billion meter cubed of water. These are official numbers, but activists claim that there are secret projects and the numbers are higher and that the government never gave the collective number of the amount of water that has been transferred every year. Diverting the river lead to destruction of the agricultural lands and sand storms and it is worth mentioning that according to "WHO" Ahwaz city in 2015 was the most polluted city in the world.

In protest, the Ahwazis condemned these projects, which destroy the environment and chanted slogans against the racist policies of the Iranian government especially the policies pushing for demographic change within the region. They chanted "Land of Arabs for Arabs" denouncing the occupancy policy of agricultural land in the jelazi in Elam city by the military.

These demonstrations are part of a campaign organized by activists on social media to protest racist policies and practices towards Ahwazi Arabs in the region.