On 6 December 2017, the Unrepresented Nations and Peoples Organization (UNPO) convened a conference on the impact the so-called China-Pakistan. Economic Corridor (CPEC) has on the people of Gilgit-Baltistan, a region which finds itself in a constitutional limbo for numerous decades. The conference entitled “Gilgit-Baltistan in Focus: The Geopolitics of the China-Pakistan Economic Corridor” took place at the American Immigration Lawyers Association and heard speeches from Jonathan Hillman (Center for Strategic and International Studies), Aliya Iftikhar (Committee to Protect Journalists) and Seth Oldmixon (Liberty South Asia).

To watch the recording of the conference, please click here.

Opening the conference, UNPO Programme Manager Fernando Burgés welcomed the participants and gave an overview of the history of and current situation in Gilgit-Baltistan, highlighting the urgent need to bring the fate of this disputed territory on the agenda, both in Europe and in the United States. Mr Burgés stressed that – in order for the China-Pakistan Economic Corridor (CPEC) to be implemented in an inclusive, sustainable way – the questions surrounding the constitutional limbo Gilgit-Baltistan finds itself in has to be resolved first.

Jonathan Hillman, Director of the Reconnecting Asia Project at the Center for Strategic and International Studies (CSIS), opened the panel discussion by providing context on what China’s One Belt, One Road initiative is and on how CPEC fits into this broader vision. Mr Hillman elaborated on the scope of CPEC, which –within the One Belt, One Road initiative – is the crucial link between land corridors and maritime corridors and comes with the promise of an investment of approximately 62.5 billion US$. According to Mr Hillman, CPEC embodies many of the challenges and opportunities other corridors and large-scale infrastructural projects in Eurasia face and is a collection of projects which primarily focuses on transportation links and the provision of energy. 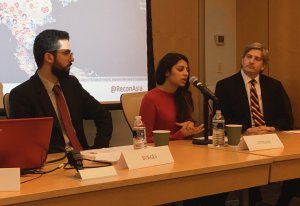 The second talk by Aliya Iftikhar then looked at the status of press freedom in Pakistan. Being an Asia Research Associate with the Committee to Protect Journalists (CPJ), Ms Iftikhar outlined threats to press freedoms journalists face in Pakistan. According to Ms Iftikhar, the way journalists are treated is often indicative of how free and just a society is, while, at the same time, cases like the implementation of CPEC show how important it is to have access to information. She pointed out that even though Pakistan has a robust, vibrant media community, the country remains one of the most dangerous places to work as a journalist. CPJ documented at least 60 cases of journalists who had been killed in direct retaliation for their work in Pakistan since 1992. Mr Iftikhar pointed out that CPJ’s research has shown that “the deadliest feat for journalists to cover is not war or human rights, but rather politics” – such as the dynamics around CPEC. 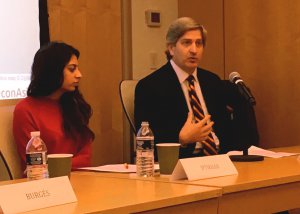 Following the instructive speech of Aliya Iftikhar, the floor was given to Seth Oldmixon, Founder of Liberty South Asia, a campaign dedicated to supporting religious freedom and political pluralism in South Asia. He stressed that, given that Gilgit-Baltistan is the overland entry point to CPEC, the region is fundamental to the success of the project as a whole. According to Mr Oldmixon, the real economic benefits to be derived from CPEC are ambiguous, mostly because direct benefits of Chinese investment in Pakistan are expected to flow back to China while most of the work in Pakistan is done by Chinese personnel, rather than engaging Pakistanis and the people of Gilgit-Baltistan directly. He also discussed concerns over the environmental impacts CPEC will likely have in Gilgit-Baltistan, both in connection with large-scale construction and the anticipated increase in traffic. Calling the situation “a classic case of taxation without representation”, Mr Oldmixon pointed out that Gilgit-Baltistan has never been fully absorbed into Pakistan’s governmental structures, exacerbating the overall non-inclusivity of the infrastructural mammoth project as a whole.

The event allowed for a fruitful exchange of views following the official programme, including remarks on the constitutional limbo by members of the Gilgit-Baltistan diaspora in the US. One conclusion to be drawn from the conference is that – while the event was a first step to raise awareness of the situation of Gilgit-Baltistan – for the status quo to change peacefully and CPEC to be implemented in a sustainable and inclusive way, this dialogue has to be kept alive and concerted efforts to resolve the issue are needed.

Please, find below a video of the conference: