On 28 November 2017, the Unrepresented Nations and Peoples Organization (UNPO), in collaboration with MEP Csaba Sógor (EPP) and the Southern Mongolian Human Rights Information Center (SMHRC), hosted a conference on the rights of minorities in Southern Mongolia. The conference shone light on the ongoing suppression of traditional herders’ rights, arbitrary arrests of activists and severe environmental degradation that is happening at the hands of Chinese authorities in the region.

In his opening remarks, the conference’s host, MEP Csaba Sógor, pointed out that in many places around the world human rights are overridden by security measures. Especially when looking at the case of China in relation to the Xinjiang Autonomous Region, Tibet and Taiwan it appears that the Chinese government ruthlessly uses hard power to suppress even the most basic human rights. Mr Sógor then drew on his experiences living under false autonomy in communist Romania as a Hungarian minority to highlight the importance of bringing the case of Southern Mongolia to the European Union’s attention. According to him, Europe’s duty is to not shut its eyes and, instead, to act as a leader of human rights when facing regimes that want to be global players in our world.

SMHRC representative Mr Enghebatu Togochog started by clarifying that Southern Mongolia, which is incorrectly known as Inner Mongolia, historically has a much broader territorial boundary than it does today. In his instructive speech, he elaborated on the region’s rich history and Southern Mongolia’s difficult relationship with China throughout the decades. Mr Togochog then detailed the mass genocides, purges and ethnic cleansing that has occurred in the region following its forced annexation by China after the Second World War. Talking about recent events, Mr Togochog brought attention to the ecological policy put in place by the PRC whereby indigenous Mongols were forcibly removed from their ancestral land to allow for ethnic Han Chinese to move in. This has resulted in Mongols in the Southern Mongolian Region being a minority in their own land. Additionally, Mr Togochog added that the government’s policy of the One Belt One Road initiative is putting an end to Southern Mongolians’ traditional nomadic way of life, and anyone who speaks out against the destruction of their culture and traditions is arrested. Closing his statement, Mr Togochog had three recommendations for the European Parliament to act on, including pressuring China to stop all forms of aggression and violence against the people of Southern Mongolia, respect for Southern Mongolian land, water and natural resources and to send a Parliamentary fact-finding mission to the Southern Mongolian region.

Mr Dogion Hatgin, President of the Inner Mongolian People’s Party, gave an overview of the history of Southern Mongolia and the Chinese occupation of the territory. He highlighted that during the systematic genocide undertaken by the Chinese government during the time of the Cultural Revolution, from 1956 to 1976, close to 100,000 people killed. Mr Hatgin then discussed the case of Mr Hada, an activist who had peacefully advocated for self-determination in the 1990’s, but was placed under arrest, violating not only his, but also his family’s human rights. He concluded by stressing that the Inner Mongolian People’s Party is a party that respects the human rights of Southern Mongolians and will continue its peaceful struggle for self-determination.

Mr Tsetsent Satoga, a founding member of the Inner Mongolian People’s Party, shared his family’s experience of facing persecution at the hands of the Chinese authorities. He discussed how his family was designated as aristocrats and had their property and livestock seized by the authorities, as well as some of his family tragically losing their lives in this period. He went on to share how he never had the opportunity to live with his family until he was much older due to his family being imprisoned by the Chinese military. His family were labelled spies and imprisoned on charges of being part of the Inner Mongolian Revolutionary Party that never existed.

Mr Satoga spoke extensively about the importance of culture and the fact that, now more than ever, all across the world cultural freedoms are being threatened, identifying forced assimilation policies as the biggest risk to these freedoms. In Southern Mongolia, he shared how this is happening by the denial of ethnic Mongols’ right to education in their mother tongue, with only two schools at the primary level still operating in the capital which teach in Mongolian. Furthermore, in the guise of development the regime is taking traditional herding land and using it for resource drilling.

Focusing on environmental degradation in Southern Mongolia, Dr Chuluu Ujiyediin explained how recent large scale cultivation is having devastating effects on traditional grasslands that have been used for herding for centuries. Furthermore, in the latter half of the 20th century, China deemed anything to do with Mongol culture to be backward and in this guise the regime forced many to accept Chinese cultural practices and lifestyles. Dr Ujiyediin explained how the degradation of the land is still being forced today, stating that three military headquarters still exist in the region to oversee mass resource cultivation and exploitation of the Southern Mongolians’ ancestral land. He finished by explaining how open pit mining is another leading factor in systematic environmental degradation, with mines producing 180 million tonnes of coal. A dangerous consequence of all these factors is the mass desertification of the Southern Mongolian region. 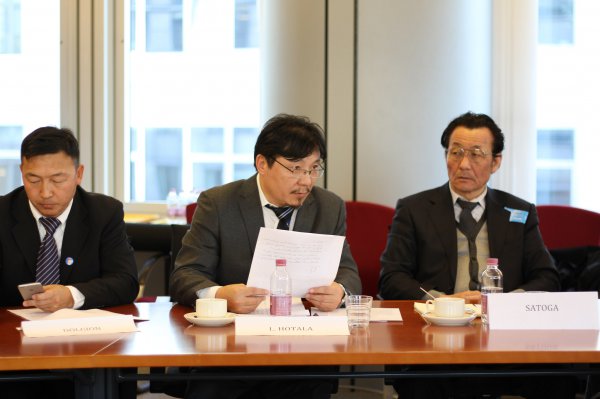 Being an independent researcher and the founder of the InterMongol Network, Mr Dugarjba L. Hotala spoke of how Chinese colonial rule is destroying the rich linguistic heritage of the Mongolian language in Southern Mongolia. He explained how in order to explain that peripheral regions are under their historic rule; China rewrites the narrative of history through the use of language. This is something that can be seen happening in East Turkestan, Tibet and now Southern Mongolia. In the Xinjiang region, ethnic Uyghurs are not allowed to name their children with Islamic names such as Muhammed anymore. Another way Chinese cultural imperialism is imposed is through inter-ethnic marriages. According to Mr Hotala, the Chinese regime does not only try to destroy the linguistic culture, but it also claims Southern Mongolian heritage as its own, a destructive practice which is legitimated by world organisations like UNESCO who are inadvertently implicit in this process.

Professor Ferenczy closed the conference by noting the history of Southern Mongolia is one that has seen a fight for freedom and self-determination for many decades. She recommended that nomadic pastoral practices need to be preserved along with human dignity and importantly the environment of the region. She thanked UNPO and the Southern Mongolian Human Rights Information Centre for bringing this issue to the attention of the European Parliament and stated that by using the pressing issue of the environment, the plight of Southern Mongolia can be pressed further in the European Parliament.

The official part of the programme was followed by a fruitful exchange of views and questions from the audience. An obvious conclusion to be drawn from the conference is that – while the event was a step forward to raise awareness of the severe situation in Southern Mongolia and of marginalized groups in China in general – for this to change, the dialogue has to be kept alive and concerted efforts and swift action by all actors involved are urgently needed.