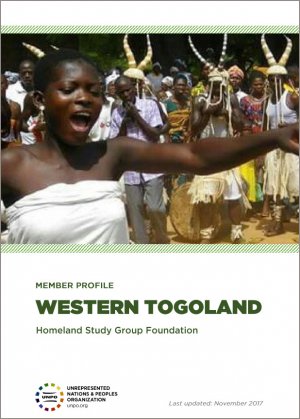 Ethnicity: tied to local languages of the peoples

The HSGF has been a Member of UNPO since 2017. They represent the movement for self-determination, secession and independence of Western Togoland from Ghana. The group was founded in 1994 by Mr Charles Kormi Kudzordzi as a platform from which to discuss the political, civil and human rights of the people of Western Togoland. 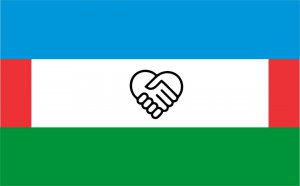 Before the arrival of imperial powers and the region becoming a German Protectorate, the various peoples that comprise present day Togo and Western Togoland were organised in different traditional areas, each administered by its own ruler. However, the Protectorate of German Togo was divided between the British, who took control of what is Western Togoland today, and the French, who took control of present day Togo, following the defeat of Germany in World War I and the signing of the Treaty of Versailles in 1919.

Western Togoland remained under British control up until and after the Second World War, when the political situation changed and it became a United Nations (UN) Trust Territory still under administration of Great Britain. During the period of decolonisation in Africa the UN called for a plebiscite on the future of Western Togoland, whether it would become independent or join in a union with the Gold Coast (now Ghana) after the latter’s independence. Organised by Great Britain, the plebiscite pointed towards union with the Gold Coast and upon the independence of the State of Ghana in 1957, Western Togoland was incorporated into the new State.

Despite concerns over the lawfulness of the referendum and questions about Britain’s concerns for the peoples of Western Togoland and their will for independence, unification with Ghana as an administrative region became a reality. Western Togoland is currently mostly comprised of what is known as the Volta Region in Ghana, as well as some areas in the Oti, Northern, North East and Upper East Provinces of Ghana. Under the dictatorship, a law was passed enabling the trial of Volta Region activists wishing to advocate for a unification with Togo or independence on the grounds of sedition and national unity.

The denial for the people of Western Togoland to have a fair say in their future is something that persists to this day. Earlier in 2017 seven members of the Homeland Study Group Foundation (HSGF) were arrested for wearing T-shirts with the inscription “9 May 2017 is OUR DAY Western Togoland”, referring to the date when the organisation attempted to declare independence. Under-development and -investment in Western Togoland is the norm, with the few initiatives that are in place such as the Kofi Annan Peacekeeping Centre discontinued with no valid reason. This has led to its overall progression being severely compromised. Some districts of Volta such as Adaklu and Kadjebi are amongst the poorest in Ghana.

UNPO supports nonviolent campaigns for self-determination. While there is no explicit right for independent statehood, the right to believe in and lawfully campaign for such causes is protected free speech and opinion. It is important that the will of the people in Western Togoland be heard, and that means giving all sides of a debate the ability to speak without coercion, threat or misuse of the judicial system to silence advocates of independence. Furthermore, UNPO believes in the importance of the history and culture of West Togoland to be taught freely and condemns all violence and discrimination in the region in its entirety irrespective of who perpetrates it. To this extent, it is important for Western Togolanders to have an equal chance to develop, both socially and economically as those in the capital region of Ghana. 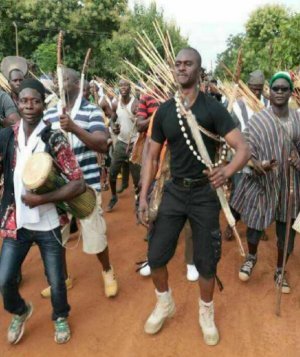 Despite concerns over the lawfulness of the referendum as well as questions about Britain’s concerns for the peoples of Western Togoland and their will for independence, unification with Ghana as an administrative region became a reality endured by Western Togolanders. In 1973, 120 Chiefs of the Volta Regional House of Chiefs who demonstrated their opposition to the extension of the Eastern Region of Ghana into the Volta Region faced a violent crackdown by the military forces. The denial for the people of Western Togoland to have a fair say in their future is something that persists to this day. Earlier in 2017 seven members of the HSGF were prosecuted with charges of treason, felony and attempt to commit treason and felony because they wore T-shirts with the inscription “I AM A CITIZEN OF WESTERN TOGOLAND” and “9 May 2017 is OUR DAY”, referring to the date when the organisation intended to declare independence. The accused were compelled to sign a pledge of good behaviour, along with document recognising that their activities are likely to pose a threat to national security.

Under-development and low investment in Western Togoland is the norm, with the few initiatives that are in place such as the construction of food storage silos and of the Kofi Annan Peacekeeping Centre discontinued with no valid reason. Roads in Western Togoland are degraded. This has led the overall progression of the territory being severely compromised. The majority of the districts in Western Togoland rate below average development in Ghana. Adaklu, Kadjebi,  Karaga and Garu are among the poorest. Pupils in some cases have to swim across floods to school daily during the rainy seasons and employment is difficultly accessible to Western Togolanders.

From 2019-2021, Homeland Study Group Foundation members have found themselves to be arbitrarily detained by the Ghanaian authorities on the grounds of treason and violating a specific law relating to advocating the status of the Volta Region. This is a law that dates back to the darkest times of the Ghanaina dictatorship, and actively discriminates against inhabitants of the Volta Region as other regions of Ghana are not subject to the same stringency should they advocate self-determination or status change as a political entity. As a result, UNPO submitted a complaint to the Working Group on Arbitrary Detention at the UN and also continues to campaign for the fair treatment of any peaceful political activist advocating change to the status of the Volta Region given its colonial past. Ghanaian security forces seem to, as of 2020, increasingly employ arrest-release-rearrest tactics used to ensure that HSGF members are almost always in some way interned without facing a trial.

To find our more about Western Togoland including: