From 4 to 6 August 2017, the 22nd annual conference of the Ogaden communities from around the world took place in Frankfurt Germany. The conference, organised by the Ogaden diaspora of Germany invited delegations from Somalia, Oromo, Amhara and Eritrea. Representatives from UNPO Members Ogaden National Liberation Front, Oromo Liberation Front and the People’s Alliance for Freedom and Democracy (PAFD) took part in the three-day conference. The conference saw traditional performances and fruitful discussions on the Ogadeni diaspora’s role in the future of their region and peoples and what concrete steps must be taken to advocate for the most fundamental rights of the people of Ogaden to be respected.

The annual 22nd conference of Ogaden Somali communities Worldwide was held from 4 to 6 August 2017 in Frankfurt, Germany.

The three-day conference was organized by the Ogaden community in Germany was attended by delegates representing Ogaden Communities from all five continents and invited guests from Somalia, Oromo, Amhara, and Eritrean communities. In Addition, dignitaries Ogaden National Liberation Front, Oromo Liberation Front, the Peoples’ Alliance for Freedom and Democracy (PAFD) and Patriotic Ginbot 7 also attended the conference.

Throughout the three day event, the renowned Hilac Band constantly raised the tempo of the meeting by performing Epic Traditional Somali folklore dances moving patriotic songs that moved the participants. Moreover, Nina Simone’s moving song “I AINT GOT NO LIFE” was played to highlight the suffering of the Somali people in Ogaden.

Due to the Ethiopian government’s total disregard for the democratic rights of life, peace, choice, assembly, freedom of speech and other basic human rights in Ogaden and Ethiopia, the Ogaden Diaspora plays a crucial role in highlighting by providing evidence of the alarming humanitarian rights situation in Ogaden and the systematic human rights violations the Ethiopian regime is perpetrating in Ogaden which include extrajudicial killings, sexual violence as a weapon of war, mass arbitrary detentions and the use of torture. 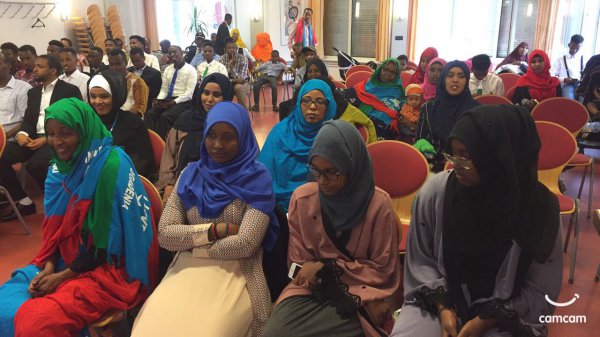 During the conference, the attendees extensively discussed the dire situation in Ogaden, Ethiopia and the Horn of Africa and how to remedy the calamity in Ogaden and Ethiopia. After deliberating on all relevant issues that affect the Ogaden people in Ogaden, the Horn of African and the Diaspora and considering worsening situation in Ethiopia and the hysterical knee jerk reactions the regime to increasing resistance of the masses against its autocratic and genocidal policies and the possibility of sudden implosion of the regime from within, the participants resolved to :

1. Strengthen the education of Ogaden Youth in the diaspora and refugee camps;
2. promote the Somali culture and language to the younger general in the diaspora;
3. streamline the activities of the Ogaden Communities Abroad and enhance advocacy and interaction with Human Rights and humanitarian rights institutions
4. increase the material and moral support to Ogaden Refugees, orphans, and victims of Ethiopian government atrocities
5. strengthen the relationships and interaction with host countries, communities and institutions and combat any acts that can create disharmony between Ogaden Somalis and host communities.
6. Maintain and develop relationships with all oppressed communities from Ethiopia, the Horn of African and the world
Support

1. The just struggle of the Somali people in Ogaden to exercise their right to self-determination and life
2. The peaceful resistance of all peoples in Ethiopia against the current undemocratic regime of Ethiopia led by EPRDF_TPLF
3. All democratic forces and institutions that believe in the rights of all peoples to self-determination, democracy and the rule of law in Ethiopia and the rest of the world
4. The noble effort of the Somali people in Somalia to re-establish their sovereignty, governance and rule of law
Condemns

1. The Ethiopian regime for its deliberate and systemic policies and practices of annihilation of the Somali people in Ogaden, by committing rampant human rights violations, blockading trade, and aid, while hampering the ability of the people to engage in economic activities that could sustain them, specially during draughts and other natural disasters
2. The Ethiopian regime for killing innocent civilians in Ogaden Oromia, Amhara, Gambella, Sidama, Afar, Omo, Konso and other parts of Ethiopia
3. The regime’s use of lethal force against peaceful demonstrators in Oromia and Amhara states and the general abuse of human rights of all peoples in Ethiopia
4. Those who support the Ethiopian regime, politically, diplomatically and economically while being fully aware of it crimes against humanity and war crimes in Ogaden, Oromia, Amhara, Sidama and Gambella and other parts of Ethiopia
5. Multinational corporations and banks that bankroll the mega-projects in Ogaden, OMO, Gambella, Benishangul and other parts of Ethiopia that forcefully displace the rural communities and destroy the livelihood of millions in Ethiopia
6. Condemns the use of local militias by the Ethiopian regime in order to suppress popular resistance and create civil wars among the neighborly communities, specially between the Somali and Oromo peoples.
7. Condemns certain regional administrations in Somalia in collaborating with Ethiopian regime security to forcefully rendition asylum seeker from Ogaden to the Ethiopian regime.
Calls Upon

1. The UN to seek security council resolution forcing the Ethiopian regime to allow independent UN commission to investigate human rights violations in Ethiopia, in particular in Somali, Oromia, and Amhara regional states and take appropriate measures to stop ongoing violations.
2. The USA and the EU as providers of the greatest aid to the regime to stop blindly supporting the current regime and instead support the rights of the peoples in instead of a decadent, undemocratic and callous regime that violates its own constitution and rule of law
3. The AU to stop acting as dump, paper tiger organization that always supports dictators in Africa and instead start acting on its charters and stand for the rights of African peoples. To date, the AU is silent about the atrocities perpetrated by the Ethiopian regimes against the Somali people in Ogaden and other parts of Ethiopia while thousands are massacred just across the AU headquarters!
Finally, the Conference calls upon the Somali people in Ogaden and all peoples in Ethiopia to unite and support each other against the vile and callous regime in Ethiopia.