On Saturday 17 June 2017, UNPO organized a football tournament for unrepresented nations in The Hague, the Netherlands.

Eight teams competed for the UNPO Cup in a peaceful and joyful, yet competitive atmosphere. The culturally diverse setting with music from the various participants and a cheerful crowd of supporters provided for an excellent opportunity for UNPO members and others to meet and interact. Teams from West Papua, Kurdistan, Chameria, Southern Cameroons and others gave their supporters what they came for, and more. Each team played several matches and the winners competed against each other in the quarter finals in an emotional and exciting tournament. It was concluded by a thrilling finale in which eventually the Chamerian team was victorious and took home the UNPO Cup.

Pictures from the event can be found on the UNPO Flickr page:

A more detailed description of the day can be found in articles that several media that covered the event made. A selection is below and will be updated. 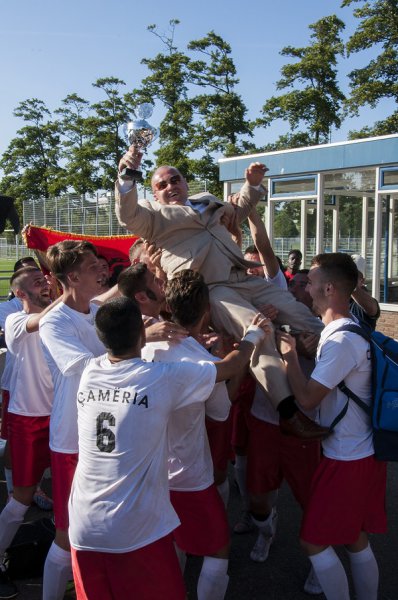 The following text is a translation of an article that appeared in a Dutch newspaper on 20 June 2017:

On Saturday 17 June 2017 the world championship football took place in the Netherlands. The participants might surprise you. Not Brazil versus Germany or Argentina versus Spain but Chameria versus Kurdistan and the Southern Cameroons versus West Papua.

It is therefore not a world championship organized by FIFA, but a tournament for unrepresented countries organized by UNPO. The organizer Jeroen Zandberg explains: 'The Unrepresented Nations and Peoples Organization (UNPO) was established in The Hague, the Netherlands by a number of unrecognized countries back in 1991 to fight for more recognition. At the time, the Soviet Union still existed and countries like Estonia, Latvia, Armenia and Georgia wanted to become independent. Now, 25 years later, the UNPO represents countries such as Kosovo, Somaliland and Kurdistan, and we try to help them get more recognition and support for human and cultural rights. A lot of politics. But also by organizing sports events like the UNPO Cup'

On this hot and sunny Saturday, it is busy on the fields of Wanica Stars, a sporting complex in The Hague, the Netherlands. Eight participating teams from all parts of the world have joined to compete for the UNPO World Cup.

The Southern Cameroons supporters are dressed in their traditional clothes and have drums and other musical instruments. Ready to support their team. The Southern Cameroonian coach, Ndeh Tangic David, says his team hopes to exceed their ranking of last year when they lost the final. They participate in the championship for the third time. The team has come to win.

The West Papuan players are also driven and eager for success in the tournament. Originally part of the Dutch East Indies, West Papua has a historical connection with the Netherlands. This proved useful when forming the football team. There are few Papuans in Europe and the trip from Asia is too expensive for them. The West Papua team therefore consists largely of young The Hague football players who have been training very hard for a couple of months to play for the main prize. The coach Simon Sapioper: "West Papua also consists of different cultures and that's what I really like about my team. They all support West Papua and they would like to contribute. " West Papua plays well in the tournament and ultimately seizes third place.

Other teams included Kurdistan / PLDP and FC Umubano. The Kurdistan team consisted of team members from the Komala Party and was supported by the Progressive Liberal Democratic Party, a Dutch political party that has internationalism and diversity high in its political program.

The big surprise of the tournament, however, was Chameria. Chameria is an area in northwestern Greece that is historically inhabited by the Cham population. They were expelled during World War II and now live mostly in southern Albania. The coach of the Chameria team, Festim Lato, is very proud that Chameria can join the world cup for unrepresented nations. It's their first time. Their team usually plays in Albania and they have come to win. They therefore excel in sportsmanship behavior and great ambition. A significant number of traditionally dressed supporters followed the team from Albania and cheer at every goal the Chamerian team make.

The final is played between Chameria and Umubano. Shaqir Haruni, a Chameria player: "Our opponent was physically very strong, yet we won. I'm exhausted, but also very happy that we have won the cup! "

Immediately after the victory, Chameria is sure to join the UNPO Cup next year and proclaims that their team will be even stronger.