The website Island Folklore – dedicated to the promotion of Taiwanese cultural heritage, has mapped out the 22 living languages which are spoken in the country today. The island nation had a multitude of influences, but the main language groups found spoken today are the Austronesian and the Sinitic one. Taiwan prides itself on its well established framework for indigenous minority rights, which is also reflected in this linguistic reality. Although improvements can still be made, as highlighted in UNPO’s European Parliament conference in June 2016, it functions as an example for other South-East Asian countries.

The article below was published by Island Folklore:

According to Ethnologue, published by US-based SIL International, over 20 living languages are found in Taiwan as of 2016.

The two following charts show the general relationship between the island’s languages and their cousins in other parts of the world. Click on the images to enlarge (best viewed on desktop). 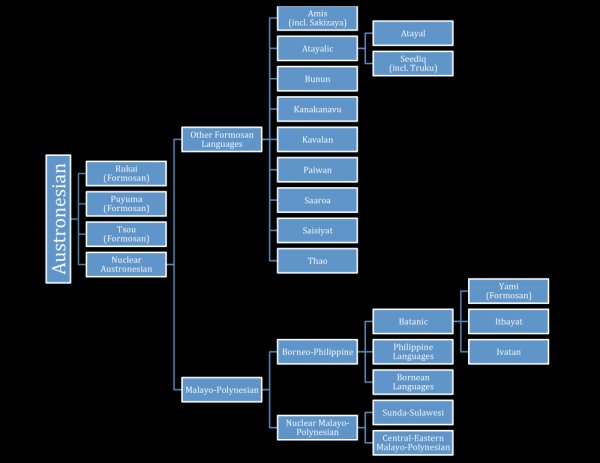 The Sinitic (Chinese) languages collectively form one of the two main branches of the larger Sino-Tibetan language family. This Chinese branch is comprised of numerous languages and dialects. Three distinct varieties are widespread in Taiwan: Taiwanese, Hakka and Mandarin. 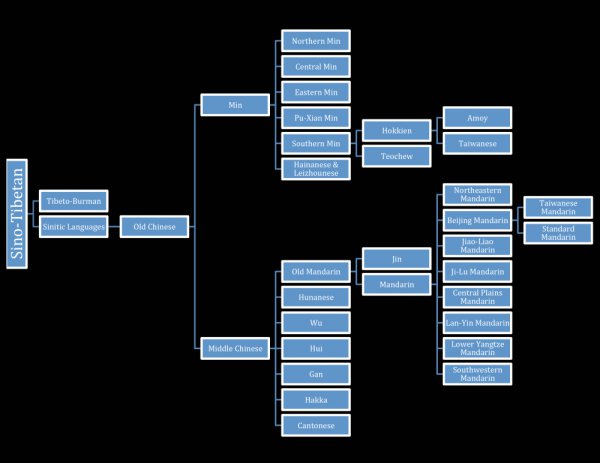 “A language is a dialect with an army and navy.” So the saying—on the arbitrariness of the distinction between the two—goes.

Linguists currently have no universally accepted method for distinguishing between “language” and “dialect.” In academic circles, “variety” (or “lect”) usually replaces the two poorly defined terms.

The languages of Taiwan fall under two main groups: Formosan and Sinitic. Within each group, varieties are sometimes regarded as dialects (like the many regional varieties of the English language). However, since the majority of Taiwan’s languages are not mutually intelligible, those within the same family tree may be more accurately described as related but distinct languages (similar to how French, Occitan, Spanish, Portuguese, Catalan, Italian, Sardinian, Sicilian and Romanian are all distinct languages that evolved out of Latin).

Ultimately, language is a constantly evolving communications tool. Over time and distance, originally closely related accents, dialects and varieties can become increasingly dissimilar. Exactly at which point a dialect becomes a language (or vice versa) is impossible to tell, which means that an inflexible division between “language” and “dialect” does not accurately reflect reality. What is certain is that Taiwan indeed has a remarkably high degree of linguistic diversity that reflects the island’s heterogenous cultural and ethnic roots.