Chittagong Hill Tracts: Meeting on Occasion of 19th Anniversary of CHT Accord Discusses Land Rights and Realities of Local People

Photos Courtesy of the Kaepeeng Foundation

Today, 2 December 2016, marks the 19th anniversary of the signature of the Chittagong Hill Tracts Peace Accord which, in 1997, had promised restitution of indigenous lands, self-determination, fiscal decentralisation for equitable economic development and demilitarisation of the Chittagong Hill Tracts. On this day, the Bangladesh Indigenous Peoples Forum (BIPF), together with the Kapaeeng Foundation, organised a discussion to evaluate the implementation of the CHT Accord, focusing in particular on land rights and livelihood of indigenous peoples. BIPF President Jyotirindra Bodhipriya Larma stated that the CHT Accord was never fully implemented, urging all democratic, progressive political parties and civil society to speak out in support of the indigenous Jumma peoples. Other speakers shed a light on the problem of internally displaced peoples, land rights and gross human rights violations manifesting themselves, to this day, in a rising number of extrajudicial killings, rape, and abductions of indigenous peoples. The Bangladeshi government recently amended provisions of the CHT Land Dispute Resolution Commission Act of 2001, which seems to be a promising step as it paves the way for a potential resolution of land disputes. Among other things, the meeting’s keynote paper recommends to resolve land disputes effectively and to enable the full rehabilitation of Jumma refugees and internally displaced families.

Below is an article published by the Kaepeeng Foundation:

To mark the 19th anniversary of the signing of the Chittagong Hill Tracts (CHT) Accord 1997, Bangladesh Indigenous Peoples Forum (BIPF) and Kapaeeng Foundation jointly organized a discussion meeting titled “19th Anniversary of the CHT Accord: Land Rights and Realities of Local People” on 1 December 2016 at Azimur Rahman Conference Hall, The Daily Star Bhaban, Karwanbazar, Dhaka.

In his closing remarks Mr. Jyotirindra Bodhipriya Larma said that civil and military bureaucracy is not interested in implementing the CHT Accord. There are several administrations and authorities that exist in CHT, and there is no coordination among them. The question of security for mass people is a big issue there. He further said that a lack of political will of government is the main obstacle to full and effective implementation of CHT Accord. The CHT Accord remains unimplemented for last 19 years due to aggressive nationalist, communal and undemocratic outlook of the rulers and policy makers of the country. He mentioned that CHT issue is national and political problem, so the problem has to be solved through political means. Hence, for the greater interest of the country and the nation, there is no alternative but to fully implement the CHT Accord, he added.

Mr. Larma urged all the democratic, progressive and non-communal political parties and the civil society to come forward with own programmes in support of the CHT’s local people’s demands and work as a pressure groups. If the government do not come forward with committed political will to implement the Accord with letter and spirit, Jumma peoples will be bound to take alternative way to make advance of implementation of CHT Accord, he further added.

Professor Dr. Mizanur Rahman, former Chairman of NHRC, mentioned that having not been able to keep promises is shameful of the government. The non-implementation of the CHT Accord is pushing the CHT into an unexpected situation. He is concerned that the process of turning the CHT into Islamized and militarized region is underway.  He said land rights is the core problem in CHT. So, if the land issues are addressed, other problem will be resolved. He also expressed concern on the harmony between Jumma and Bengali people, violence against indigenous women, Islamisation of region, business controlled by Bengali outsiders etc. He also urged the government to form mixed police force with indigenous and Bengali people to avoid any unexpected incident in CHT and building confidence among the communities. Moreover, he urged the government to provide self-determination and constitutional recognition to indigenous peoples.

Raja Devasish Roy in his speech described the critical situation of Internally Displaced People (IDPs) in CHT who are mostly living in the reserve forest in Sajek area. Referring to the Jumma IDPs, he said they are even deprived of access to healthcare, education, drinking water and sanitation. Therefore, he urged the government to rehabilitate India repatriated Jumma refugees and IDPs. He demanded to transfer core subjects, including Land and Land Management, Law and Order, Police (local), Forest, Environment etc to the Hill District Councils without further delay to accelerate CHT Accord implementation process.

Professor Dr. Sadeka Halim, former Information Commissioner, said that implementation process of CHT Accord is not measureable with numbers. The number of incidents related to land disputes has been increasing day by day, due to not resolving the land disputes through CHT Land commission in CHT. 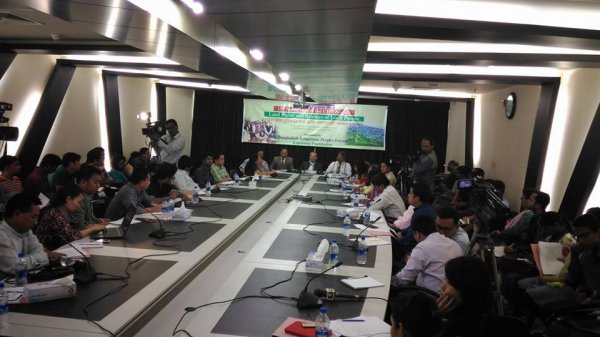 Professor Mesbah Kamal said that CHT Accord Implementation Committee is not working effectively. He also added that civil society could help to formulate a new roadmap to achieve the full and effective implementation of the CHT Accord.

Ms. Shaheen Anam, Executive Director, Manusher Jonno Foundation, said that different forms of human rights violations including communal attacks, killings, rapes, and abductions on indigenous peoples and minority communities are on rise across the country. She also said that due to the demographic engineering, indigenous peoples’ culture, language, religion is in endangered. Bangladesh government should take proper step to protect indigenous peoples.

ALRD Executive Director Shamsul Huda said that though CHT Land Disputes Resolution Commission has been amended in the Parliament but Rules of Business has to be framed to run functions of the Commission effectively. He urged to the government to make rules and regulations having consulted with the CHT Regional Council. He also called upon the government to enhance the capacity CHT Land Commission by providing adequate funds, man power and logistic support to ensure smooth functioning of the Commission. Finally, he proposed to rehabilitate Bengali settlers in the plain land.

In his keynote, Mr. Pallab Chakma said that the lands used for traditional Jum cultivation and the lands already recorded and under occupation of the indigenous Jumma people have been given in long-term lease to such people who are not permanent residents of CHT in the name of horticulture including rubber plantation and development of orchards. In Bandarban alone, a total of 1,605 plots, 25 acres of land for each plot that stand a total of 40,077 acres of lands leased out to the outsides. Besides, thousands of acres of lands have been acquired or have been under process for acquisition in the name of establishing camps, expansion of camps and training centers for the armed forces. Furthermore, as part of the program for expanding reserved forests and protected forest, the Environment and Forest Ministry undertook an initiative for acquisition of 218,000 acres of lands through gazette notifications issued from 25 June 1990 to 31 May 1998. Hundreds acres of lands are being taken in acquisition and under forcible occupation in the name of establishing tourism centers in the three hill districts.

According to CHT Accord and Hill district Council Acts, the subject of land and land management is bestowed upon the three Hill District Councils. But still Deputy Commissioners of three hill district continue holding the control of land and land management in CHT. According to the Hill District Council Acts, no land can be transferred, leased out, sale and acquired without prior approval of the Councils. However, Deputy Commissioners do not comply with these laws.

The CHT Accord also provides to resolve land disputes in CHT in consonance with the laws, customs and practices in force in the CHT through forming a land commission. the Land Commission could not start its functions for resolution of land disputes in last 19 years as because of remaining the amendment of contradictory provisions of the CHT Land Dispute Resolution Commission Act 2001 pending.

2. Transfer subject of the Land and Land Management to the Hill District Councils.

3. Cancel all the leases given to non-resident persons for rubber plantation and other plantation.

5. Rehabilitate Bengali settlers outside the CHT with due dignity.