On 29 September 2016, the Unrepresented Nations and Peoples Organization (UNPO) in collaboration with the Assyrian Women’s Federation of Sweden, held a conference entitled ‘Vulnerability and Empowerment of Women and Children in Armed Conflict‘ at the European Parliament in Brussels. The event was hosted by Kati Piri MEP (S&D, Netherlands) and also attended by Bodil Valero MEP (Greens, Sweden). The conference, which brought together representatives of Assyrian women from Sweden, Belgium, Turkey, the Netherlands, Syria, Iraq and Germany, discussed the multiple challenge faced by Assyrian women and children in conflict zones and highlighted the urgent need for international action to end their suffering.

Not only challenged by being women in a conflict zone, but also by belonging to a minority, Assyrian women should be empowered to have an impact on future developments in their homeland, stressed  Kati Piri MEP (S&D) who opened the International Assyrian Women’s Conference, which, as explained by Nursel Awrohum, Head of the Assyrians Women’s Federation of Sweden, had been postponed for several years due to the difficult conditions Assyrian women face in their home countries. Johanna Green, UNPO Programme Manager, underlined the importance of the conference in offering Assyrian women a platform to voice their concerns and formulate strategies for rebuilding their society.

Among the four guest speakers invited to share their stories, Santa Essa, on behalf of Bahija Dawod Nisho, Secretary of the Assyrian Women’s Union in Iraq, was the first to take the floor. “For decades, Assyrian women have been repressed and subject to severe discrimination policies”, said Ms Essa, and emphasised the urgent need for practical, concrete and binding recommendations by the international community to address their precarious situation. Norma Zeito Saadi, Director of the Assyrian Womens Committee in Syria, described how her organisation is working to activate the youth in conflict zones and trying to build bridges towards the Arabs and Kurds, which is key for a peaceful future. Sabah Elia, member of the women’s section of the Assyrian community in Södertälje in Sweden, then shared a heart-breaking account of her relatives who had endured several months in ISIS captivity in Syria. Last to take the floor was Februniye Akyol Akay, Member of the Union of Democratic Local Government in the Mardin province in Turkey. She highlighted the difficulties and fear that mar the everyday life of Assyrians  Turkey, pointing out that the community has decreased from 1 million to just 5.000 today. 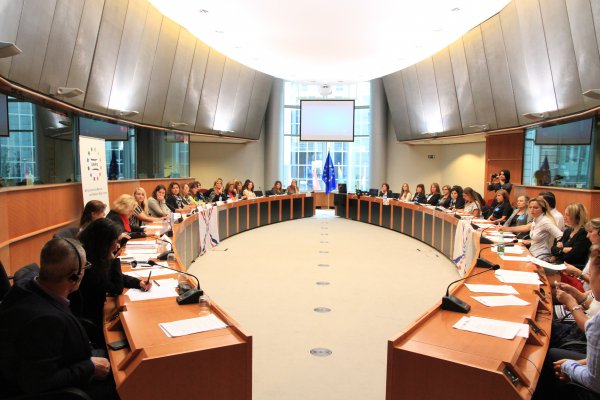 The conference was closed by Attiya Gamri, President of the PvdA Women’s Movement in the Netherlands, who took the opportunity to once more call for international solidarity, at a time when the Assyrian nation in the Middle East has all but vanished. Ms Gamri concluded by presenting a conference declaration demanding an end to the ongoing violence, discrimination and torture against the Assyrians and appealing to the European Union and United Nations to finally act in this regard.

While some positive steps have been taken by the European Parliament in the past few months, including the adoption of a resolution in February 2016 characterising ISIS’ deadly campaign against religious minorities as genocide, an important stone remains unturned – namely the role of women and children in this conflict. The 29 September conference therefore presented a much needed step to raise awareness of the plight of Assyrian women and children at the European level.

Below is the full conference declaration adopted by the participants:

Following decades of marginalisation and targeted violence, today the Assyrians - an ethnic and religious minority, whose homeland comprises parts of northern Iraq, Syria, Turkey and Iran - continue to be subjected to extreme violence at the hands of the various actors of the conflict ravaging Iraq and Syria. This conflict, has had a particular impact on Assyrian women and children, who continue to be displaced, deprived of education, food and shelter, and who suffer from severe psychological trauma as a result of their current situation.

Against this background, we, participants to this International Assyrian Women’s Conference, adopt the following declaration:

Whereas the European Parliament has recognised that the so-called 'ISIS/Daesh' is committing genocide against ethnic and religious minorities in the Middle East (2016/2529(RSP));

Whereas the ongoing power struggle and armed conflict dominating Syria and Iraq has and continues to displace and kill hundreds of thousands of Assyrians;

Whereas the conflict has also lead to the destruction of Assyrian historical and cultural heritage in the area, crucial to the maintenance of the collective integrity of the Assyrian population;

Whereas Assyrian women no longer wish to be portrayed by the media as irrelevant actors and therefore pushed to the side-lines of these political games, denied their voice and thus the opportunity to stand up for their rights;

Whereas we need to recognise the many Assyrian women in Iraq and Syria, who aside from fighting for their own life are given the huge responsibility of ensuring the well-being of their entire family;

Whereas Assyrian women, be it in Turkey, Syria, Iran or Iraq, are consistently subjugated to physical, psychological and sexual abuse;

Whereas there is an urgent need to tackle the use of sexual violence as a weapon of war, including rape, the abducting of women to turn them into sex slaves, and forced marriage;

Whereas the cultural and religious cleansing operations by ‘ISIS/Daesh’ forcing civilians to convert to Islam has had a severe impact on Christian Assyrians making them a particular target of persecution and impossible for them to freely practice their faith;

We appeal to the international community to take all necessary measures to effectively ensure the safety and rights of Assyrians in Syria, Iraq and elsewhere, who despite various resolutions continue to be subjected to gross violations of human rights and international humanitarian law, with discrimination, displacement and arbitrary executions among the main abuses. This could potentially be achieved through projects and schemes to protect and monitor the situation of Assyrian women in war-torn regions.

We also ask for the support of democratic parliaments to pressure relevant United Nations bodies and agencies to take effective measures to ensure that appropriate action is taken on ground;

We call for the international protection of the Assyrian language and cultural heritage in order to not let this brutal conflict wipe out the Assyrians and their rich history;

Finally, we underline that there can be no peace without taking concrete action.