Aiming to raise awareness of the gross human rights violations perpetrated by the Ethiopian government against its own citizens, the Unrepresented Nations and Peoples Organization (UNPO), in cooperation with the Nonviolent Radical Party (PRNTT), the Human Rights League of the Horn of Africa and the Ogaden People's Rights Organization, convened two side-events to the XXXII Regular Session of the UN Human Rights Council in Geneva, on 22 and 23 June 2016, respectively.

On 22 June 2016, a conference entitled ‘Business and Human Rights in Ethiopia: Double-Digit Growth at What Cost?’ looked at the systematic and large-scale violations of human rights committed hand-in-hand by transnational corporations and the Ethiopian government, with particular focus on the Ogaden region. Mr Abdirahman Mahdi, Chairman of the Ogaden People’s Rights Organization (OPRO), provided the audience – comprised of human rights defenders, diplomats, politicians, journalists and academics from all over the world – with an introductory overview of the Ogaden, a region that has recently seen its territory divided into 22 blocks to be then assigned to transnational corporations, with no regard whatsoever to the local inhabitants, who are being forcefully displaced and denied access to their grazing lands. Mr Mahdi reminded the audience that, although the Ethiopian constitution stipulates that the land is owned by the state and the people of Ethiopia, “the Somali people in Ogaden have no say or right in deciding the fate of their land and are never consulted”. 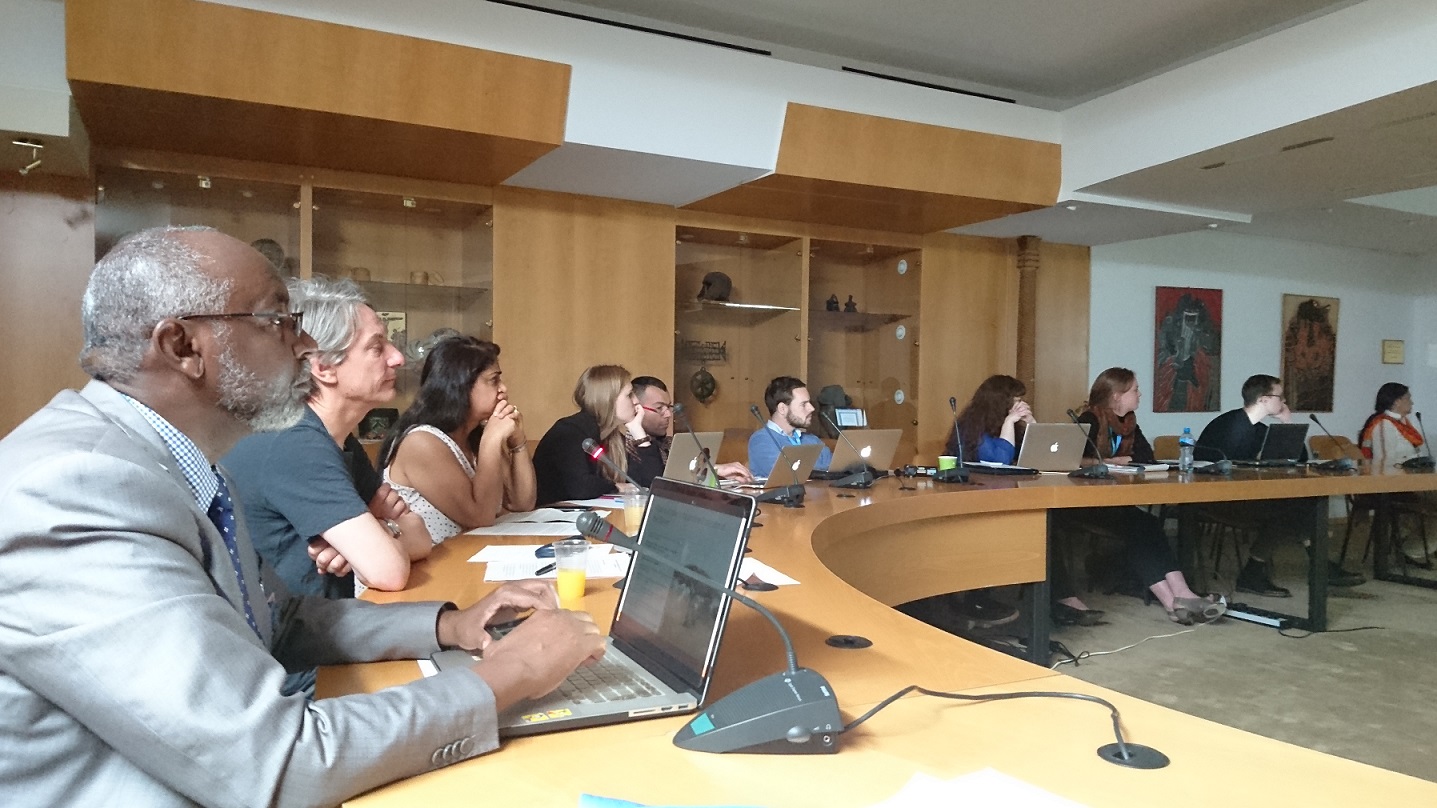 In a region where aid is severely restricted and international NGOs are denied access or operate under direct supervision, “detention, rape, summery execution and torture are rampant”, Mr Mahdi explained. Even the International Committee of the Red Cross has been banned from working in the Ogaden since 2007, while it is allowed in other parts of Ethiopia. Only during the last six months, several civilians in 69 localities were rounded, detained, beaten, looted or killed. On 6 June 2016, 51 people were killed in Jama Dubad, in the Gashamo District On 15 June, more than 400 civilians, relatives of Ogaden diaspora members were detained and tortured in Qabridahar, Dhanaan, Wardheer, Godey and Dhagahbur, after some demonstrations against the regional president had taken place in Australia.

Following Mr Mahdi’s presentation, journalist and director Mr Graham Peebles screened for the first time his recent short documentary “Ogaden: Ethiopia's Hidden Shame”. The film is based on interviews conducted in Dadaab Refugee camp in Kenya in October 2014 and reveals the state-sponsored terrorism taking place in the Somali Ogaden region of Ethiopia, showing related stories of extreme violence, torture and rape at the hands of the security forces. After the screening of his poignant film, Mr Peebles shared with the audience the experience of shooting and producing the piece. Mr Peebles remarked that, in addition to Ethiopian military and paramilitary being engaged in killings to clear the area for resource exploration, the Ogaden has also been severely affected by drought and famine. “Although the WFP is providing emergency food aid in the Ogaden, the relief programme has been forced to recruit locals who are said to be working for the Ethiopian security services”, he explained. As a result, food aid is increasingly being diverted from WFP warehouses to local agencies, “who reportedly transfer it to the army or government regional administrators, who then divide the food amongst themselves with the purpose of being sold on the black market or given to groups that support the ruling party”.

Scene of the film "Ogaden: Ethiopia's HIdden Shame' by Graham Peebles, screened at the UN in Geneva

Followed by a debate, this first conference sought to address the complex relationship between business and human rights in Ethiopia, where the most basic rights of the local population are sacrificed on the altar of major economic interests and so-called ‘development’.

On 23 June 2016, the second side-event, in collaboration the Human Rights League of the Horn of Africa (HRLHA), shifted the focus to the Oromo region of Ethiopia where, in November 2015, national security forces responded to largely peaceful protests with excessive and lethal force. The roundtable was entitled “Violations of Freedom of Assembly and Demonstration: Brutal Crackdown on Peaceful Oromo Protests”.

Mr Garoma Wakessa, Director of the Human Rights League of the Horn of Africa, opened his presentation by offering a comprehensive overview of the situation of the Oromo, who despite being the largest ethinic group, are largely socially and politically marginalized. Mr Wakessa presented the origins of the protests that broke out across Oromia, in 2015, when civilians took to the streets to protest against the so-called ‘Integrated Master Plan’, the central government’s intention to expand Addis Ababa’s municipal boundary into Oromia regional territory. Mr Wakessa emphasized that the demonstrations were mainly led by Oromo students and while the protests started as an opposition to the ‘Master Plan’, they gradually evolved into a wider Oromo movement levelled against the central authorities. 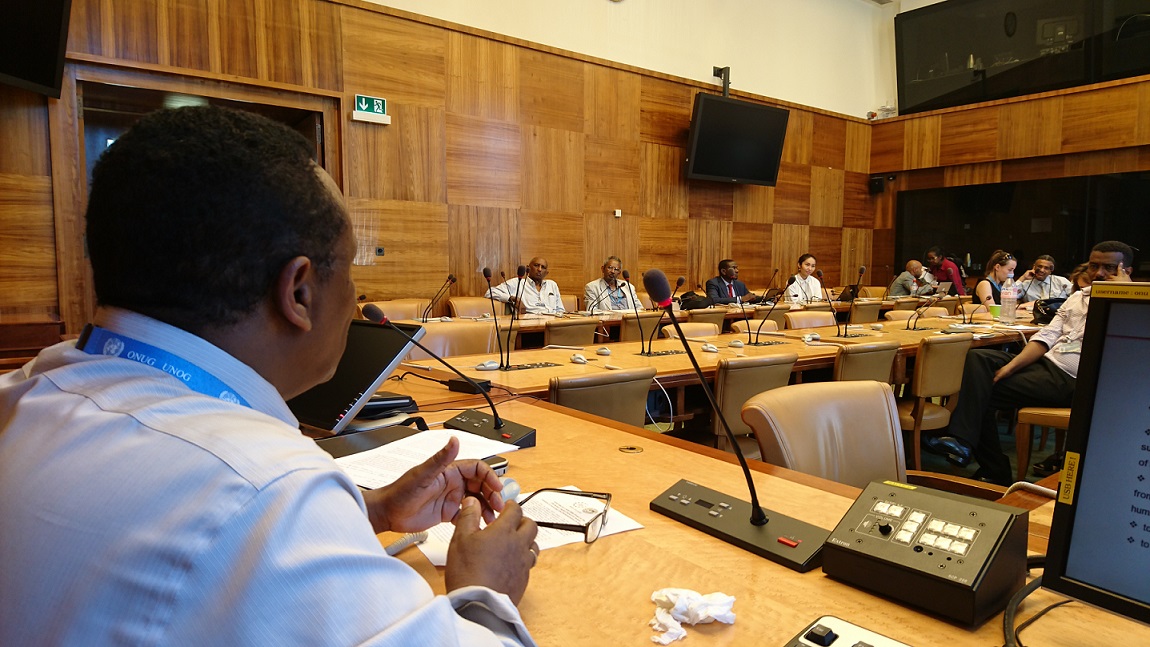 Mr Felix Horne, Ethiopia Researcher for Human Rights Watch, offered with his most recent report,  “‘Such a Brutal Crackdown’: Killings and Arrests in Response to Ethiopia’s Oromo Protests,”,  further details of the Ethiopian government’s use of excessive and unnecessary lethal force and mass arrests, mistreatment in detention, and restrictions on access to information to quash the protest movement. His publication was based on interviews with more than 125 protesters, bystanders and victims of abuse, who documented serious violations of the rights to free expression and peaceful assembly by security forces against protesters and others, between the very beginning of these protests in November 2015 and up until May 2016. Moreover, Mr Horne explained that Ethiopian government’s pervasive restrictions on independent human rights investigations and media have meant that very little information has been coming from affected areas. Since mid-March [2016], the Ethiopian government has restricted access to Facebook and other social media, as well as restricted access to diaspora television stations.

The well-achieved goal of convening two side-events to the XXXII Regular Session of the UN Human Rights Council was to raise awareness of the dangerous misconception that Ethiopia is 'an African democracy on the make' and 'a beacon of stability in an otherwise troubled region'. Both events informed human rights defenders, diplomats, politicians, journalists and academics from all over the world about the dire human rights’ situation in Ethiopia, firstly by shedding a light on the damage caused by large-scale business operations, notably in areas inhabited by ethnic groups who are already being systematically marginalized and suppressed by the central government. Secondly, by looking at how an authoritarian regime uses brutal and lethal force against peaceful protestors, such as the case of Oromia.  The international community clearly has an active role to play in ensuring investigations into the mass atrocities taking place in Ethiopia, to hold perpetrators of crimes responsible and to end the enduring impunity.

Mr Garoma Wakessa, Director of the Human Rights League of the Horn of Africa

Side-Event Press-Release: Business and Human Rights in Ethiopia: Double-Digit Growth at What Cost?