China's New Law on Counter-Terrorism and its Impact on Minorities

On 7 June 2016, a roundtable conference took place at the Clingendael Institute in The Hague to discuss “China's new law on counter-terrorism and its impact on minorities”. The conference, organised by the International Campaign for Tibet (ICT), brought together many activists, academics and representatives of civil society from all over the world.

The conference was opened by Ms Tsering Jampa, the Executive Director of ICT Europe, who briefly outlined the objective of the conference and stated that the new anti-terrorism law increases tensions and strengthens oppression and therefore decreases peace and security in China.

Mr Ko Colijn, the Director of the Clingendael Institute, added to the introductory statements that anti-terrorism is a universal goal, but that it must not be used to undermine the Rule of Law.

The first panel, moderated by Ms Marie Holzman, president of Solidarité Chine, discussed the use and impacts of the counter-terror law on human rights, civil society and minorities.

Ms Sharon Hom (Human Rights in China), opened this panel with a general overview of the legal situation and the various laws that the Chinese government has implemented and is planning to implement; from the national security law, to the counter-terrorism law, cybersecurity law and the foreign NGO management law. According to Ms Hom the DNA of the communist party is the root cause of the legislation and the primary objective of these laws is to maintain party power. The cybersecurity law will make it legal to shut down and monitor the Internet. The registration requirements as a result of the foreign NGO management law will place human rights and advocacy groups under strict government control.

The second speaker, Mr Kelsang Gyaltsen (representative of HH the Dalai Lama to Europe), stated that the struggle for the rights of the Tibetans and Uyghurs is getting increasingly difficult and emphasised that the long arm of China is reaching further and further into Europe and the USA. Mr Gyaltsen stated that it is hard to evaluate how much worse the situation for the Tibetans and others currently is due to the new law, because the situation at present is already harder then at any time since the cultural revolution, with the exception of the time between 1989 and 1992. Mr Gyaltsen closed his contribution with a call to the international community to make the acceptance of China into the international community dependent on their adherence to basic human rights standards.

Ms Kate Saunders (International Campaign for Tibet) spoke about the security in Tibet and provided several examples of intimidation of Tibetans by the Chinese government, which sees Tibet as being in the frontline of its fight for national security. China implements a great number of cultural and social initiatives in order to dilute the Tibetan identity. Furthermore, Tibet's natural ecosystem is being compromised by the building of dams.

Mr Dolkun Isa (World Uyghur Congress) informed the participants of the situation of the Uyghurs whose resistance to Chinese oppression has been labelled as terrorism since 2001. Through a series of examples Mr Isa showed that the oppression of the Uyghurs is continuing and is fiercer than ever before. It is also more present in every aspect of daily life. For example, this year China banned Ramadan in Xinjiang and the media is strictly controlled. Activism abroad for the rights of Uyghurs is also very hard because the Chinese film the participants and subsequently threaten the family members of the demonstrators back home.

The final speaker of the first panel was Ms Ursula Gauthier (former correspondent of the Nouvel Obs in Beijing). She shared her experiences as a journalist in China and reflected on the reasons of her expulsion from China in December 2015. According to Ms Gauthier you can't report on incidents even when they are not terrorist in nature. The Chinese government is misleading the West in framing the oppression of the Uyghurs as the same as the fight against international terrorism. Furthermore, the new law is not needed internally in China, since most of it has been common practice for decades. However, an important aspect of the new law is that it will have an impact on the reporting in the West, not just in China. Foreign correspondents will have to conform to the ideological standards set by the communist party and are no longer able to report on any violent attacks or demonstrations. 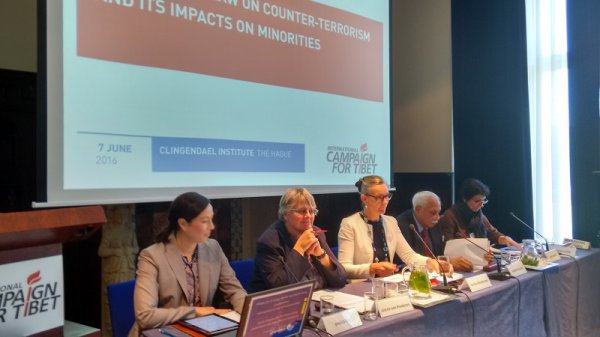 The second panel saw experts from different countries and regions explaining the international perspective regarding the violation of human rights in the name of counter-terrorism activities.

The first speaker presented the Indian view on the situation. Mr Jayadeva Ranade (Centre for China Analysis and Strategy) stated that the oppression has increased in recent years due to the efforts by the Chinese president Xi Jinping to centralise China even further. The reason for the anti-terrorism law according to Mr Ranade is because the attacks against the interests of the Chinese government are no longer limited to the minority areas but have spread throughout China. Furthermore, China is increasing its pressure on, and cooperation with, neigbouring Asian countries to limit the movement of the Uyghurs and Tibetans. For example, Pakistan is closely working with the Chinese to identify Uyghurs in the country and deporting them to China. Chinese influence in Nepal has also sharply increased which threatens the interests and security of the Tibetans.

Ms Jessica Carl, the political officer at the US Permanent Mission to the United Nations in Geneva, explained the position of the United States government through a series of examples of recent activities. During the Human Rights Council session in March 2016, the US and Canadian Permanent Missions to the UN organised a side-event in Geneva with nobel laureates discussing human rights. The Dalai Lama also attended and used the podium to highlight the ongoing struggle of the Tibetan people for human rights and dignity. At the 31st HRC session, the USA and 11 other countries presented a joint statement condemning Chinese actions including the “unexplained recent disppaearances and apparant coerced returns”. 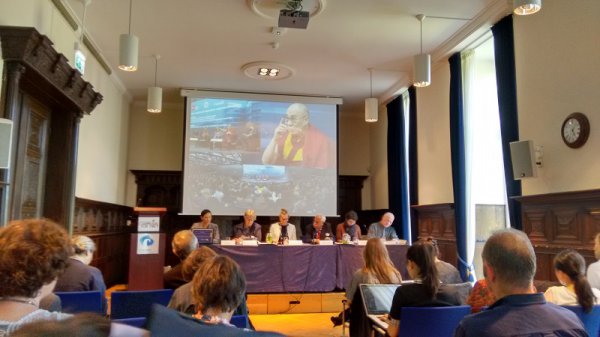 The third speaker, Ms Garrie van Pinxteren (Sinologist and Senior visiting fellow at the Clingendael Institute) provided the audience with the preliminary findings of her ongoing research into the media in China. According to Ms Van Pinxteren, investigative journalism has become more and more difficult and marginalised since 2012, the start of her research. Only very few critical journalists remain and they have less support than ever. In the past it was possible to be critical at times, especially about the environment and economic transparancy, but this leniency has also disappeared.

Ms Joëlle Hivonnet (China division of the European External Action Service (EEAS)), expressed the EU's position on the new counter-terrorism law. She pointed to five major concerns: 1. the definition is too vague and can thus be used in too many circumstances; 2. there is no independent legal recourse; 3. it results in total control over the media; 4. the Internet controls are too wide and 5. it sets a framework for arresting persons outside China.

The conference was closed with a debate between the panellists and the audience about how to monitor the anti-terrorism actions and how to come up with a joint action to further the respect for human rights of the Tibetans, Uyghurs and Chinese people.