After an exam paper had been leaked by Oromo protesters, the Ethiopian Ministry of Education had to cancel upcoming university entrance exams. Mostly student-led protests over the rights of the country’s marginalized Oromo people have effectively led to the months-long closure of the region’s high schools. Therefore, Oromo students had less time to prepare than students in other parts of the country. The leak of exam papers by Oromo students, thereby buying more time for students to prepare for university entrance exams, is thus a major success for the beleaguered movement.

Below is an article published by Oromia Press:

Ethiopia’s university entrance exams, due to start today [30 May 2016], have been cancelled because one of the papers has been leaked online, reports the government-affiliated Fana Broadcasting Corporate. Pictures of the English exam have been widely shared on social media. Minister of Education Shiferaw Shigute is quoted as saying: “After a cross check, we decided to terminate the whole exam since we had no evidence that the other exams were safe.” People supporting the protests for greater rights for Ethiopia’s Oromo people are saying that they are responsible for the leak. Photographs of some of the exam papers have been posted on one activist’s Facebook page: 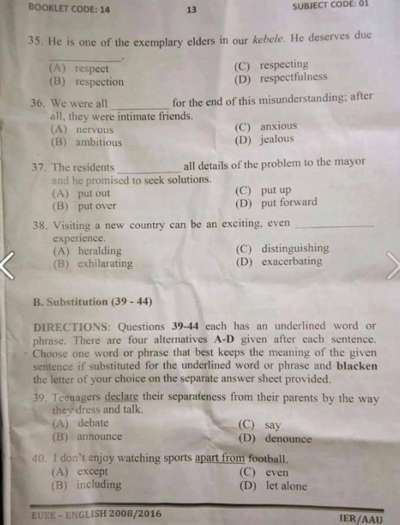 The activists said they wanted Oromo students to have more time to study for the entrance exams after their high schools had been closed for several months during a wave of protests at the end of last year and the beginning of this year. Ethiopia’s education ministry has said that a plan for new exams will be announced soon.