On 14-15 January 2016, the Unrepresented Nations and Peoples Organization (UNPO), together with Oxford University Associate Professor Fiona McConnell and Tibet Justice Centre, ran a workshop entitled “Lobbying and Advocacy Strategies”, in which participants from 13 different unrepresented nations discussed their advocacy possibilities at various UN bodies and especially with foreign ministries. The participants were guided by a team of trainers and facilitators, which included Carl Söderbergh (Minority Rights Group International) and Prof Joshua Castellino (Chair of the UN Forum on Minority Issues). This workshop, the second of the larger programme “Training Diplomats from Unrepresented Nations: Capacity Building for Effective UN Lobbying”, was funded by the ESRC Impact Acceleration Account, 2015-2016.

From approximately one hundred applicants, 19 participants representing the Acheh, Chittagong Hill Tracts, Haratin, Kurdish from Khorasan, Iraqi Turkmen, Northern Cypriot, Ogaden, Oromo, Sindh, Somaliland, Southern Mongolian, Tibetan and Uyghur communities, were selected to participate in the workshop, which took place in the School of Geography and the Environment of the University of Oxford.

After briefly revising the Theory of the Case, facilitated by Ms Mandie McKeown (International Tibet Network) and by UNPO’s Johanna Green and Tommaso Nodari, participants were guided through the connections between national governments and UN bodies by Carl Söderbergh (MRG). Mr Söderbergh also discussed different aspects that unrepresented diplomats can take into account when deciding on which States to target during their advocacy efforts, such as looking at countries with a particular interest in their topic or that are otherwise especially influential and powerful. Joshua Cooper (University of Hawaii), who also took part in the first workshop, supported Mr Söderbergh’s presentation by sharing his long-time experience as a human rights advocate in Geneva. Finally, both trainers warned the participants about the risks of lobbying certain States and following certain tactics, stressing that a seemingly positive alliance can in some instances undermine one’s claims and advocacy efforts. 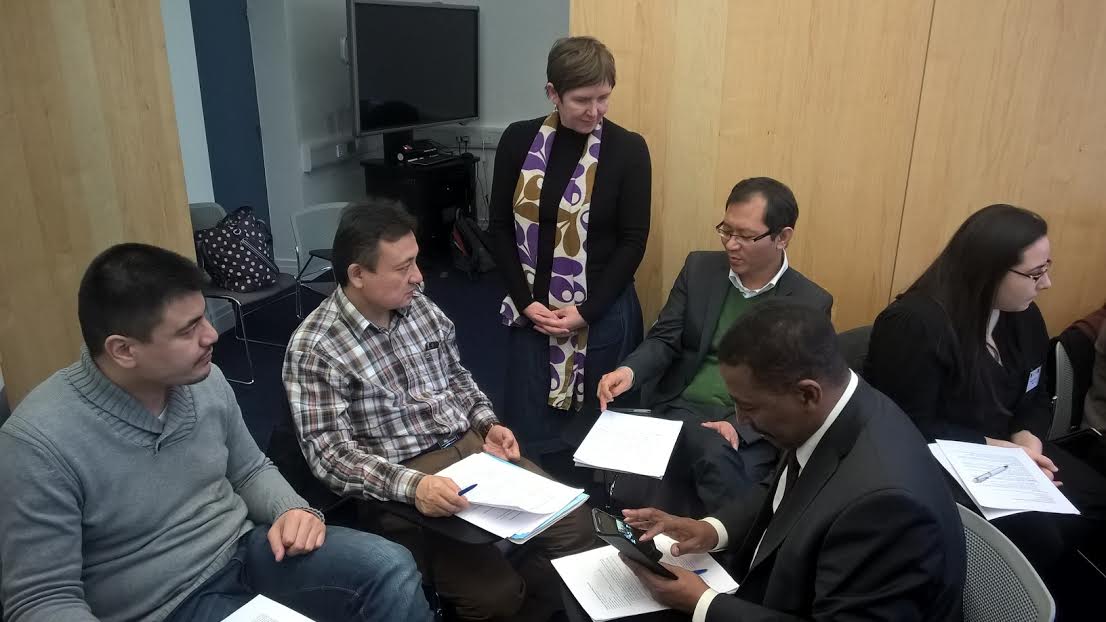 On the second day of the workshop, Ms Kate Saunders (International Campaign for Tibet), guided the participants through the different obligations and commitments made by States at the UN level and how these can be used as leverage. Following this introduction, participants were invited to formulate concrete advocacy strategies in small groups and present them in front of a mock foreign ministry. Later on, Mr Paul Whiteway from Independent Diplomat presented the work of his organisation, while touching upon his previous experience as a diplomat in the UK Foreign Office.

The last session, vibrantly led by Prof Joshua Castellino, chair of the UN Forum on Minority Issues and Professor at Middlesex University, looked into the history of the right to self-determination and the controversies surrounding it, focusing on the aspects that can be used by unrepresented diplomats when advocating at the United Nations. Clearly stated in many international treaties, including the UN Charter, this particular right has been interpreted in different ways throughout the decades and is strongly intertwined with politics, making its exercise very difficult for unrepresented nations and peoples.

To read more about the project, please visit the Training Programme’s website.

A summary of the first workshop, which took place in Geneva in September 2015, can be found here.

We encourage all members of unrepresented nations to tell us about their experiences in lobbying at the United Nations. You can fill in the questionnaire in English or in French.