Dutch Court has Jurisdiction to Hear Case against Shell

Today 18 December 2015, the Court of Appeals in The Hague, the Netherlands made a landmark decision in determining that it has jurisdiction in the case brought by four Ogoni farmers and Friends of the Earth against a Nigerian subsidiary of the British-Dutch multinational Shell.  The plaintiffs claim that the damage due to oil leakage from two underground pipelines and oil wells in the Niger delta was caused by Shell’s subsidiary in Nigeria during the period of 2004-2007. The Court allows, for the first time, a joint claim against Shell for causing extensive oil spills in Nigeria.

Geert Ritsema, campaigner at Friends of the Earth: "Today's ruling is a landslide victory for environmentalists and these four brave Nigerian farmers who, for more than seven years, have had the courage to take on one of the most powerful companies in the world. This ruling is a ray of hope for other victims of environmental degradation, human rights violations and other misconduct by large corporations."

The decision can already be seen as a victory in the field of human rights as the Dutch justice system provides a possibility for legal redress to victims of environmental damage and human rights abuses in general when a Dutch company is involved. Not only has the Court affirmed jurisdiction, it has also called upon Shell to disclose internal company documents in relation to the issue. They must give the Court access to these documents for it to determine the case on the basis of all available relevant documents and facts.

The farmers continue to live in poverty as the oil spills destroyed their farms and fish ponds. They remain unusable because the spills have never been properly cleaned. The plaintiffs request the Court to direct Shell to clean up the oil spills, to award the farmers compensation for their losses and grant them assurance that future damage will be prevented by effective maintenance and patrol by Shell.

UNPO celebrates this initial victory for the environment and hopes that the Ogoni farmers will find justice in their case. The Ogoni people are represented in UNPO by the Movement for the Survival of the Ogoni People. UNPO has been involved in raising awareness about the issue of environmental degradation in Nigeria. More information can also be found here.

The ruling presents an important precedent: Dutch multinationals and their foreign subsidiaries can be prosecuted in the Netherlands. In a sensitive matter such as the loss experienced by Nigerians due to damage caused by Shell, today was an important development. We hope that this will be the beginning of a positive outcome for the farmers.  More information on the court case can be found here. 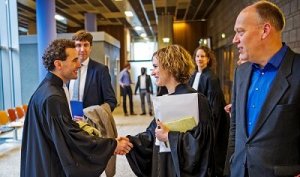