Against the backdrop of the recently achieved nuclear deal with Iran, the Unrepresented Nations and Peoples Organization (UNPO) and the Southern Azerbaijan Alliance convened a conference, hosted by Prof Dr Klaus Buchner MEP (Greens/EFA) at the European Parliament, entitled ‘Lake Urmia - Humanitarian and Environmental Disaster in Iran’. Aimed at examining the potentially devastating and far-reaching consequences of the crisis surrounding Lake Urmia, the roundtable event also addressed the possible role the EU could play in reversing an environmental catastrophe that stands to devastate the lake’s bio-diverse ecosystem and the surrounding population in an already politically volatile region.

Lake Urmia, a UNESCO-registered bio-reserve, was once one of the world’s largest saline lakes, but due to significant declines in water level over the past ten years, the lake has shrunk by nearly 90% and is currently almost at the point of no return. Justified by agricultural and economic interests, destructive and unsustainable human activity has severely affected the lake basin, which has seen the construction of a highway, a bridge, dams and reservoirs. 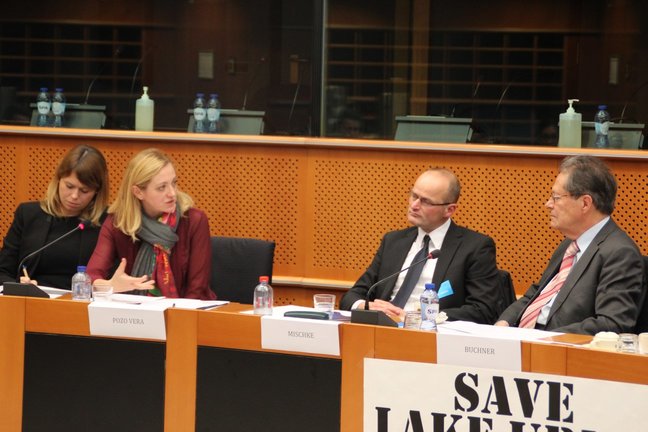 Opening the conference, Prof Dr Klaus Buchner MEP (Greens/EFA) reinforced his commitment to draw attention to the issue of Lake Urmia, not only at the European level, but also internationally. In his opening remarks, Dr Buchner highlighted the urgency of tackling bio-toxicity and radiation in the region, which is caused by wind-borne salt, dust storms and the dangerous exposure of salt particles to the sun, triggering ultraviolet rays. Ms Iva Petkovic, UNPO’s Program Coordinator, introduced the organization and its work in raising awareness about the disappearing Lake Urmia. She concluded her opening remarks by explaining how environmental issues in Iran tend to be inherently political and intertwined with human rights abuses.

Mr Steven Blockmans, Senior Research Fellow and Head of EU Foreign Policy at Centre for European Policy Studies, provided the audience with a contextualized analysis of EU-Iran relations before and after the Nuclear Deal from political, security and economic perspectives. According to Mr Blockmans, cooperation between the EU and Iran could have win-win outcomes as they share common interests beyond economic goals, such as the need to uproot ISIS, find a political solution to end the war in Syria – regardless of diametrically opposed goals – and combat drug trafficking from Afghanistan. However, the success of Brussels-Tehran cooperation will depend on a number of factors, including Iran’s involvement in the peace process in the Middle East and its human rights record, he concluded.

Ms Esther Pozo Vera, Coordinator for European Neighbourhood Countries and Mediterranean Issues at the Directorate-General for Environment (European Commission), explained the EU approach to international environment policy and elaborated on its importance as a diplomatic tool. Hopeful that environmental cooperation with Iran will be possible in the near future, Ms Pozo Vera spoke about the importance of having a “Shared Environmental Information System (SEIS)” as a basis. As a network of public information providers that share reliable environmental data, SEIS provides the framework for environmental governance without which decision-making is difficult, according to Ms Pozo Vera. Ms Pozo Vera also highlighted that the Directorate-General for Environment seeks to engage with multiple stakeholders, including civil society organisations, and providing them with capacity building trainings. 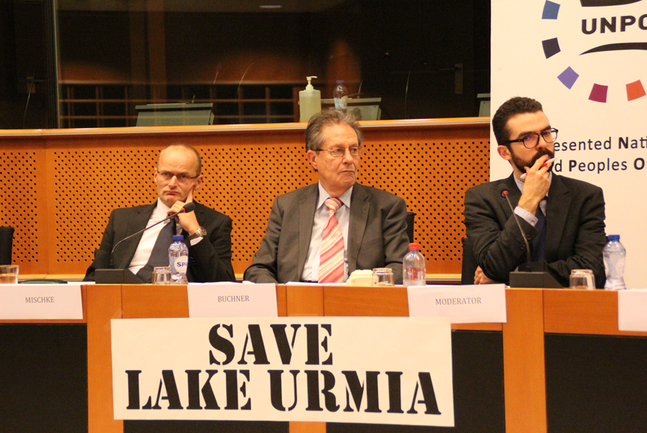 The third panellist, Dr Steffen Mischke, Professor at the University of Iceland, outlined the reasons behind the rapid disappearance of Lake Urmia; the scientific community has at its disposal data, which shows that this is due to human activity. His graphic presentation demonstrated that neither a change in precipitation nor temperature could have caused the lake’s deterioration, especially since the pattern of droughts in the region has not changed significantly in the past several decades Instead, Dr Mischke pointed out that a third indicator – change in water usage and intensive irrigation farming – appears to be the leading cause behind Urmia’s sudden transformation. He further enlightened the audience with lessons learned by comparing Lake Urmia to other cases with geological similarities: Lop Nur Lake in China, which disappeared due to intensive irrigation farming; the Dead Sea, now partly dry due to irrigation, industrial use, population increase and salt production; and the Aral Sea, one of the planet’s worst environmental disasters created by large-scale irrigation of cotton fields.

Ms Ayda Karimli, spokesperson of the Southern Azerbaijan Alliance, focused on Iran’s demographics and highlighted that, with 70% of Iran’s population being non-Persian, there is an urgent need for the inclusion of the country’s multi-ethnic minorities in the political decision-making processes, including the management of Lake Urmia. Ms Karimli warned about the catastrophic humanitarian crisis that may follow “if and when” Lake Urmia dries out entirely. “While the first group of refugees could be over four million, the total number could reach around 15 million people, given the impact on wider region,” she argued. In light of Tehran’s deliberate mismanagement and negligence of the Lake Urmia crisis, Ms Karimli concluding her speech by posing a question to the audience: “can we afford to fuel greatest ecological disaster of the 21st century on top of the already extremely sensitive political situation in the Middle East?”

The last panellist, Mr Amir Mardani, founder and spokesperson of the South Azerbaijan Student Movement, reiterated that Iranian authorities are failing to take concrete and immediate action to save the lake. Mr Mardani emphasized that with approximately 8 billion tons of salt concentrated at the bottom of Lake Urmia, and with the ongoing desertification of the region, high levels of wind-borne salt toxicity could affect the nearby landscape with a radius of 500km, including Armenia, Azerbaijan, Iraq and Turkey. Such a large-scale ecological disaster could trigger unforeseen consequences and even armed conflicts, especially due to the instability of the region. The only way forward, he concluded, is to pressure the Iranian government to change its policies towards non-Persians, and thus, create a democratic environment in which all the nations in the country could contribute and resolve issues that affect Iran’s entire society.

Attracting a diverse audience of activists, Members of the European Parliament and academics, the conference explored the various challenges in saving and recovering Lake Urmia. Following a fruitful exchange of views, conference speakers concluded that the dire and urgent situation of Lake Urmia requires major international attention, which could exert pressure on the Iranian authorities. Despite President Rouhani’s promises to allocate 6 billion dollars over the next decade to fund the building of better infrastructure and water conservation projects, Tehran is stalling rescue plans. Following the historic nuclear deal, a new phase in EU-Iran relations may also open doors for possible environmental cooperation in the near future. As many speakers reaffirmed during the event, Lake Urmia does not have time for inaction and political or diplomatic constraints. UNPO urges European institutions to work together to facilitate constructive engagement with the Iranian authorities in order to prevent the complete disappearance of Lake Urmia.