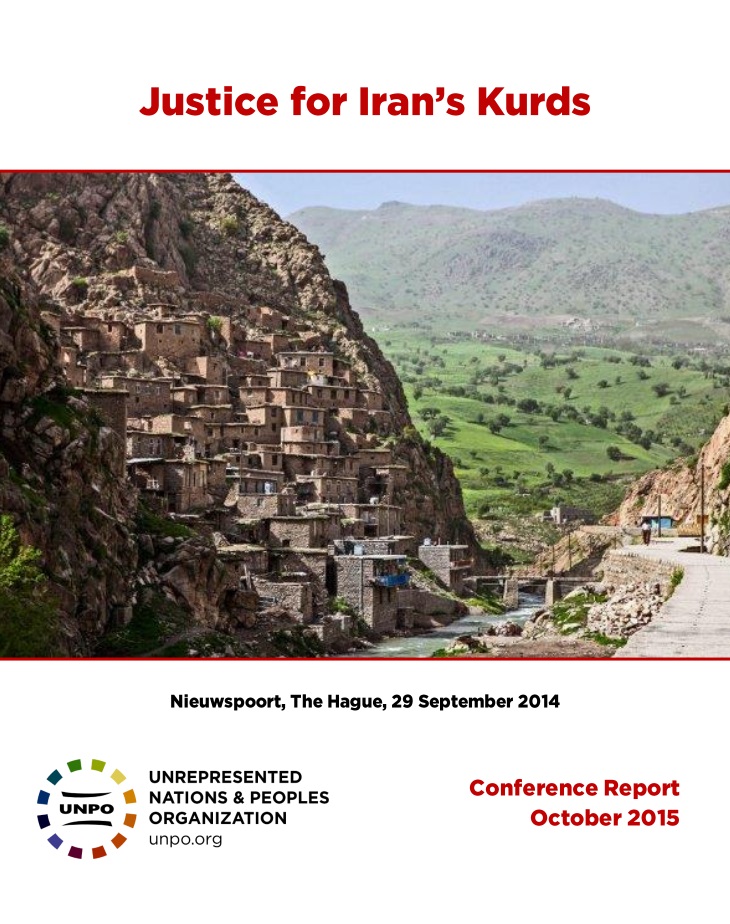 One year after the high-level conference that it organised at Nieuwspoort, The Hague (press release), UNPO is publishing a report entitled “Justice for Iran’s Kurds”, containing the transcription of all speeches delivered at the event. In that occasion, UNPO and the International Network of Iranian Kurdistan Human Rights (INIKHR) organised a stimulating debate involving Kurdish activists from different political affiliations, as well as European specialists to discuss and raise awareness of the human rights situation of the Iranian Kurds.

As mentioned by most speakers, the lack of information concerning Iranian Kurdistan in mainstream media hides systematic and widespread violations of the community’s fundamental rights. The discussion, building on the nature of these violations, also touched upon the current political situation, both in Kurdistan and abroad and the community’s history until modern-day Iran, highlighting the need for a regime change in order to achieve democracy and respect for pluralism. To conclude, the audience discussed how to put the struggle of Iranian minorities at the top of Western powers’ agenda, especially when looking at nuclear worries and business interests or at other human rights and humanitarian emergencies in the Middle East.

Thanks to the variety of the speaker’s backgrounds, throughout the event the situation of the circa 10 million Kurds in Iran was analysed from different perspectives: historical, political, anthropological and legal. What most speakers concluded, also thanks to the inputs of the audience, is that there is an increasing need to raise awareness of the abuses that the Iranian Kurds face in the Islamic Republic of Iran. Among the many violations that they face, Iranian Kurds are forbidden to use their language in education; most of them suffer from religious discrimination for being Sunni rather than Shia; they lack proper political representation; they receive fewer investments for development and they suffer from a higher rate of unemployment. Additionally and most alarmingly, community leaders and human rights activists are persecuted, assassinated and arrested without fair trial.

The first panel of the Conference focused on unveiling the main historical and political features of Iranian Kurdistan. Activists and experts analysed the ancient roots of the Kurdish identity, paying due regard to the policies that the different Iranian political regimes had towards the community. While the fear to talk or to engage in politics is very much alive for Iranian Kurds, the awareness of their Kurdish identity has instead been getting stronger in the past decades.

Providing the participants with his first-hand experience, Representatives of two of the main Iranian Kurdish parties elaborated on the political framework of the community and the different plans of the main political forces. Nonetheless, they stressed how, aside political differences, the permanent solution that all Iranian Kurdish parties seek involves a change of regime to a truly democratic and federal government, able to safeguard ethic, linguistic and religious plurality.

Following this line of reasoning, the second panel concentrated on future prospects for Iranian Kurds. The international attention to Iranian’s nuclear ambitions is by no means matched by a careful warning to the abuse of Iranian Kurd’s fundamental rights. In fact, when human rights issues are raised concerning Iran, they are hardly ever dedicated to the Iranian Kurdish case. Despite several UN reports confirming the alarming issues raised by local activists, the international response to the Iranian Kurdish plea has been very poor.

Already at the time of the Conference, the ongoing negotiations in relation to Iran’s nuclear ambitions were met by optimism by some, but scepticism by others. While the now concluded nuclear deal might indicate an important step in the right direction, speakers at the conference were very sceptical about a shift in Iran’s domestic policies towards its minorities.

Today, a year later, UNPO wants to renew its commitment to advocate for the Iranian Kurds and the other minorities of Iran, including the Baloch, Ahwazi Arabs and Southern Azerbaijani, to see their most fundamental rights respected and to allow them to live in a democratic and federalist Iran.