The Human Rights League of the Horn of Africa has released a statement condemning the arrest and arbitrary imprisonment of hundreds of Oromo citizens, and calling on readers to write to the Ethiopian authorities in complaint.

Read the full statement below:

Even though the government of Ethiopia claimed 100% of the victory during the parliamentary election of May 2015, harassment and intimidation through arbitrary arrests, kidnappings and disappearances of civilians have continued unabated in all corners of the Oromia Regional State under the pretext they voted for opposition parties and did not give their voice for the EPRDF wing Oromo organization, the Oromo People Democratic Organization (OPDO)

According to HRLHA correspondents in Oromia, the major target areas of these most recent government-sponsored human rights abuse include Bule Hora (Guji zone, Southern Oromia), Dambi Dolo (Western Oromia zone), Western and North Showa Zones (Central Oromia Regional State). According to the report obtained from Oromia, more than two thousand Oromo nationals have been arrested and many have been abducted since the May 2015 election.

In another incident, the Ethiopian federal police arrested over 400 farmers, men and women in the North Showa Zone Warra Jarso district from different communities on the pretext that they harbored rebels who fought against the government. The victims were picked up from their homes and confined in Warra Jarso district administrative offices and different local schools.

Although it has been difficult to identify everyone by their names, HRLHA correspondents have confirmed that the following were among those arrested: 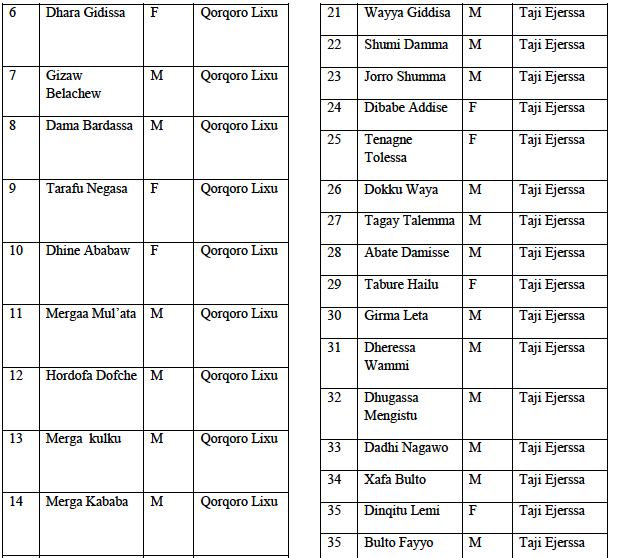 All the arrestees are being held incommunicado without food and drink under very poor conditions, and many of them have been severely beaten by the federal police- among them, Jarro Shuma has reportedly been seriously injured.

The Human Rights League of the Horn of Africa (HRLHA) expresses its deep concern over the safety and well-being of these Oromo nationals who have been arrested without any court warrant and are being held at Warra Jarso district administrative offices and in different schools without any food and drink under appalling sanitary conditions. The Ethiopian government has a well-documented record of gross and flagrant violations of human rights, including the torturing of citizens who were suspected of supporting, sympathizing with and/or being members of the opposition political organizations. There have been credible reports of physical and psychological abuses committed against individuals in Ethiopian official prisons and other secret detention centers, including government offices and schools.

This is what is happening currently in Warra Jarso District of North Showa Zone of Oromia Regional State.

HRLHA calls upon governments of the West, all local, regional and international human rights agencies to join hands and demand an immediate halt to these extra-judicial actions, and the immediate unconditional release of the detainees.

Please send appeals to the Ethiopian Government and its concerned officials as swiftly as possible, in English and Amharic:

- Indicate your concern regarding the apprehension and fear of torture of the citizens who are being held in different detention centers, including police stations, the infamous Ma’ikelawi Central Investigation Office, and call for their immediate and unconditional release

- Urge the Ethiopian authorities to ensure that detainees will be treated according to regional and international standards on the treatment of prisoners, and that the whereabouts of the abducted citizens be revealed

Send Your Concerns to:

Office of the Ministry of Justice of Ethiopia

Office of the UN High Commissioner for Human Rights

Office of the Commissioner for Human Rights