On 5 May 2015, in light of the continuous disregard of the Azerbaijani government towards its minority ethnic groups, the Unrepresented Nations and Peoples Organization (UNPO) and the National Talysh Movement (NTM) organised a conference entitled “Azerbaijan: Double Standards and Crackdown of Minority Rights”.  Held at the European Parliament and co-hosted by MEPs Laurențiu Rebega (S&D), Jaromír Štětina (EPP) and Bogdan Wenta (EPP), the event gathered a diverse audience of academics, journalists, activists and politicians, including Csaba Sogor MEP (EPP), Damian Drăghici MEP (S&D) and Frank Schwalba-Hoth, former MEP.

Mr Bogdan Brunon Wenta MEP opened the conference highlighting the importance of raising awareness of the situation of minorities in Azerbaijan and welcomed the opportunity to organise an event to discuss this issue. He also underlined that the EU promotes freedom and rights of minorities and that it should expect the same from its partners. 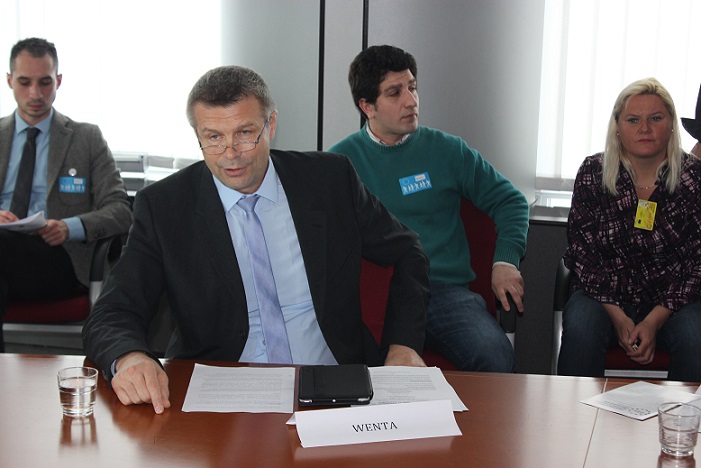 Mr Jaromír Štětina MEP, sharing with the audience the reason for his interest in the topic, explained that minorities in Azerbaijan as well as his own home country, Czech Republic, were for a long time absorbed within the Soviet bloc, and that he therefore nurtures a sense of solidarity to all people who experience national identity oppression. 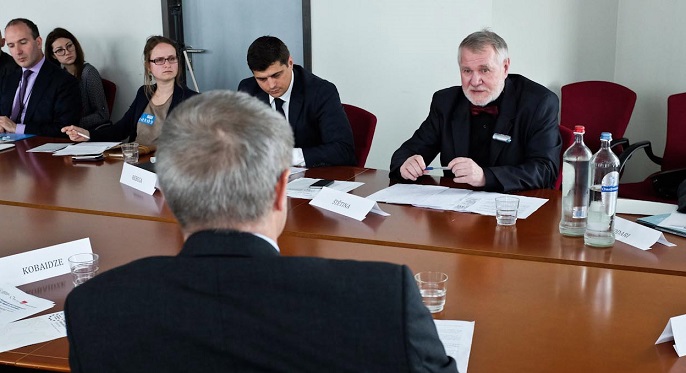 Ms Johanna Green, UNPO Programme Manager, contextualized the timeliness of the conference in light of the upcoming 4th Eastern Partnership Summit and the first ever European Games, to be held in Baku in June. With high economic interests at stake, Ms Green reinforced this moment as an opportunity for the EU to live up to its core values and to pressure for an improvement of the human rights situation in Azerbaijan.

The first panel, entitled Minority Rights in a Challenging Environment, sought to address the difficulties of defending human rights in the current Azerbaijani political context. Ms Shorena Kobaidze, Programme Coordinator of Minority Rights Group’s (MRG) Eastern Partnership Minorities Network, started by giving an overview of the South Caucasus’ diversity and offering an insightful comparison between Azerbaijan and its neighbours. Despite a common trace of lack of political participation among all countries in the region, according to Ms Kobaidze, the possibility of discussing minority issues finds different grounds with each of the governments. While in Georgia there is a more open environment, in Azerbaijan the climate is very negative and fear discourages people from discussing minority rights, while the government limits the freedom of movement of human rights activists.

Ms Julie Reniers, a freelance journalist who took part in UNPO’s 2013 fact-finding mission to Dagestan and Azerbaijan, shared with the audience some insights from her own experience, focusing on how difficult it was to find Lezghins to interview due to fear on part of the latter of repercussions against their families. She further explained that at a certain point of the mission, the delegates were advised to pretend to be tourists, as they were being followed by people believed to be affiliated with the Azerbaijani secret service. Ms Reniers also emphasized that since her visit to Azerbaijan, there has been an increasing crackdown on activists and journalists, and closed her speech reminding that currently the country has more than a hundred political prisoners. 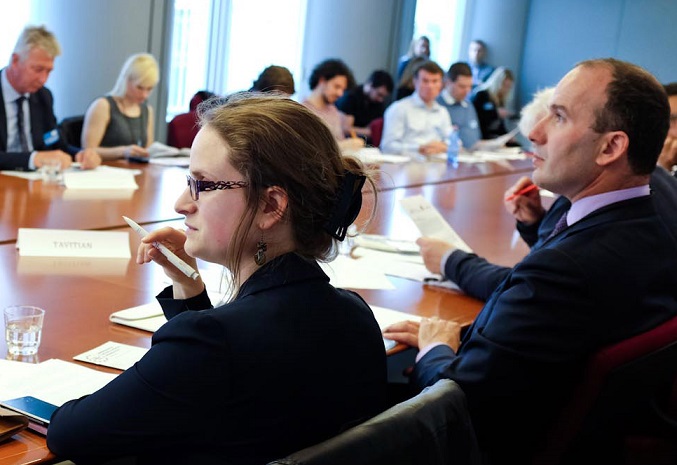 The first panel was closed by Mr Jeroen Zandberg, UNPO Treasurer, who also took part in the aforementioned fact-finding mission. Mr Zandberg gave an insight into the case of the Lezghins, stressing that their plight is the protection and development of their language as well as educational and cultural interests - objectives that are severely prevented by the Azerbaijani Government’s assimilation policies.

The second panel, entitled Ways Forward: Civil Society Initiatives, Economic Development and International Strategies sought to debate theoretical and practical alternatives to protect the rights of minorities in Azerbaijan. The panel was opened by Mr Alikram Hummatov, President of the National Talysh Movement, who addressed the problems arising from the Aliyev Government’s  extreme political centralization. Although in theory a democracy, he said, the country does not have a real separation of powers and its current political system leaves no room for dissent or alternative opinions. In his opinion, a possible solution lies in political reforms and decentralization, which would give each of the regions in the country an opportunity to rearrange their social, cultural and economic lives according to their needs and identity. 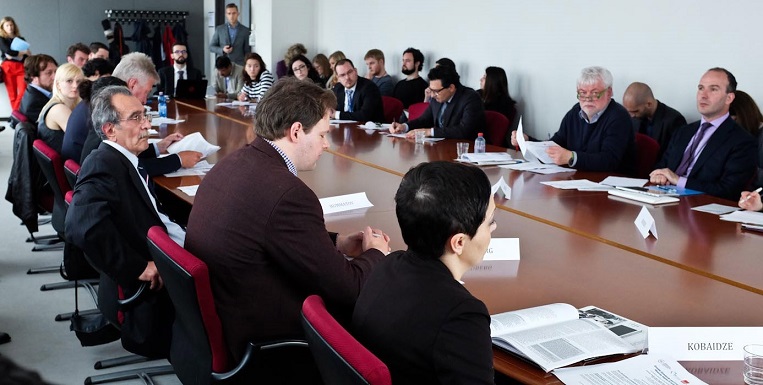 The following speaker. Mr Robert van Engelenburg, suggested that social changes in the country could be triggered through Regional Economic Development. In light of Azerbaijan’s economic growth in the last decade, mainly based on natural resources, Mr van Engeleburg proposed the Triple Helix, a model of interaction and exchange that happens between the sectors of government, industry and research/academia. Also called “the Golden Triangle”, this framework could potentially transform the ten regions in Azerbaijan into economic catalysts, he argued. 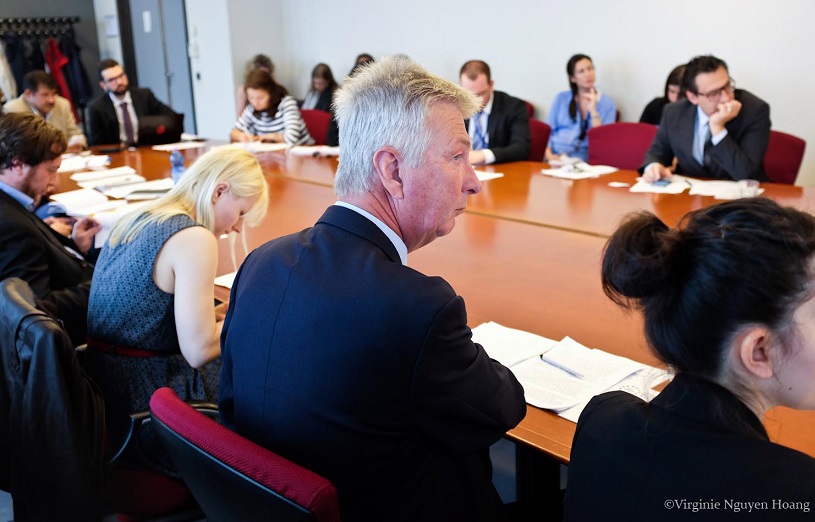 Last, Mr Nicolas Tavitian, Director of the Armenian General Benevolent Union (AGBU) highlighted how the EU could contribute more to the democratization process of its neighbouring countries. He emphasized that above all, the EU’s relationship with Azerbaijan revolves around oil policies and warned about the possibility of a crisis in the country in the near future, unless the situation improves. He also drew important parallels between the situation of minorities in Turkey and Azerbaijan, both of which are important partners to the EU.

Mr Laurențiu Rebega MEP delivered closing remarks, praising the initiative to bring together at the European Parliament such a variety of participants, willing to learn more about the topic and to compare differing views. Mr Rebega reminded the audience that the Lezghin and Talysh communities, like many other minorities in Europe and beyond, are simply asking for their right to exist to be respected, in accordance with their identity and cultural and linguistic distinctiveness.

An enriching round of heated questions and answers followed between audience and speakers. The overall conclusion of the conference was the urge to bring to the EU foreign policy agenda the commitment to formulate with the Azerbaijani Government, and other stakeholders, concrete policies to protect the rights of the country’s ethnic minorities. It became clear that a strong political, as well as economic, EU-Azerbaijan relationship presents an opportunity to engage in the enforcement of the country’s constitution and ratification of the Council of Europe’s Framework Convention on National Minorities (FCNM). UNPO and the National Talysh Movement (NTM) sought, in cooperation with the MEPs who co-hosted the conference, to reinforce the commitment to raise awareness to the issue and hope to engage in future peaceful dialogue with all concerned parties.