On 23 April 2015, in view of the forthcoming 24 May national election in Ethiopia, the Unrepresented Nations and Peoples Organization (UNPO) and the Ogaden National Liberation Front (ONLF) joined forces with five Members of the European Parliament: Julie Ward (S&D), Ana Gomes (S&D), Soraya Post (S&D), Jordi Sebastià (Greens/EFA) and Bodil Ceballos (Greens/EFA), in organising a high-level conference entitled ‘Cartoon Democracy: Authoritarian Rule and Elections in Ethiopia’. The conference took place in the European Parliament in Brussels and brought together representatives of different disenfranchised movements in Ethiopia, international academic experts, activists, and politicians. Its well achieved purpose was to offer a platform whereby those who have been denied their right to participate and contribute to the election process in Ethiopia could come together to openly and freely address existing challenges and explore possible ways forward for democratic change in a country that over the past years has increased its stranglehold on any political opposition.

Ms Julie Ward MEP opened the conference by stressing her strong commitment to giving a voice to those who do not have one. She reflected on the questions of cultural identity, citizenship and media freedom, which are all crucial elements of the political climate in Ethiopia. 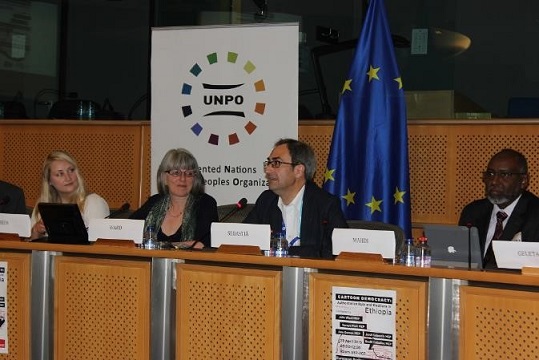 Mr Jordi Sebastià MEP, in turn, underlining his background in journalism, shared his first-hand experience working in Ethiopia, where he had encountered the oppression faced by different ethnic groups.

Ms Bodil Ceballos MEP, who took the floor towards the end of the conference, shortly addressed some of the issues pertinent to the development aid and support extended by the EU to the Ethiopia despite the ongoing human rights violations and atrocities committed by the latter. While arguing that completely cutting off the aid flow is not a viable option, she however agreed on the need for changing the direction of the support.

The last MEP to intervene, long-time supporter of the people of Ethiopia, Ms Ana Gomes, drew attention to the country’s 2005 election and her role as Head of the then EU Election Observation Mission. Taking into consideration that the Ethiopian government did not allow for a report on the election results to be delivered by the EU EOM in neither 2005 nor 2010, she commended the political decision of the EU not to deploy an EOM to the forthcoming Ethiopian election. She furthermore criticized EU officials for not being well informed about the severe conditions most Ethiopians live under and for staying passive in this respect. 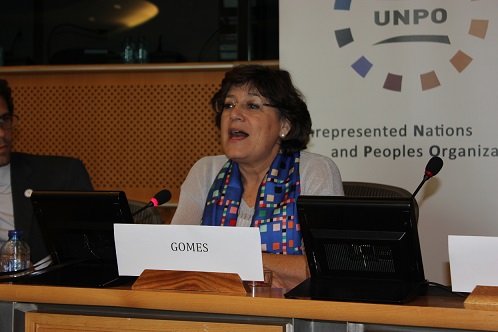 The first panel entitled ‘Where Ethnicity Meets Politics: The Political Climate in the Run-up to the 2015 Election’ offered a situational overview and assessment of the political challenges faced by regional movements in Ogaden, Oromiya, Sidama, Gambela, as well as the Ginbot7 opposition party. First to take the floor was Mr Abdirahman Mahdi, Foreign Relations Secretary of the Ogaden National Liberation Front (ONLF), who expressed that time has come to leave historical disagreements behind and instead offer the Ethiopian people an opportunity to look forward towards how to build a better future for Ethiopia as a whole. This only becomes possible and feasible as a strategy when all the different ethnicities and nations being oppressed under the same flag get united and start thinking constructively. Stressing on the need for immediate action, he further argued that in case there is no effective progress in Western policies towards Ethiopia, the country is prone to become the next Yemen or Nigeria, since the government is maintaining its power through causing fear and repression. 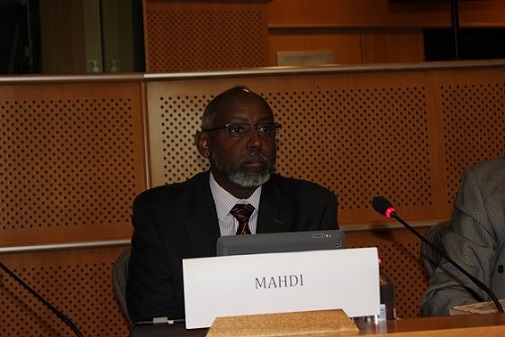 Taking a similar stance, Dr Shigut Geleta, Head of the Oromo Liberation Front’s (OLF) Diplomatic Division, underlined that a common solution for the troubling state of democracy and human rights in Ethiopia should be reached immediately.  Superficial reforms; the misuse of government resources and foreign aid by the political elite; poverty; appalling human rights violations; a demographic boom; global terrorism; the use of excessive military force; and failure on part of the international community to use legal instruments against the regime, are among the major challenges the country is faced with, he added.

Mr Abebe Bogale, Executive Committee Member of the political opposition party Ginbot 7, highlighted that the Ethiopian government has constantly been using various tactics, including repressive antiterrorist laws, to discourage any sort of political opposition. At the same time, the country ranks among the top five when it comes to exiled journalists.  Mr Bogale further argued that not only must democracy and the rule of law be established, but also the advancement of human rights is crucial for the stability and development of the Horn of Africa.

Mr Betana Hamano, Vice-Chairman of the Sidama Liberation Front (SLF) alongside his colleague Mr Denboba Natie gave a presentation on the marginalisation and struggle for autonomy of the Sidama people, the 5th largest ethnic group in Ethiopia. They stressed that although the 1995 Constitution provides for the right to regional autonomy, in reality such a right has never been respected. Moreover, in economic terms, the Sidama community gets only a very small fraction of the profit stemming from coffee production and trade, despite Sidama being the main region for coffee production. 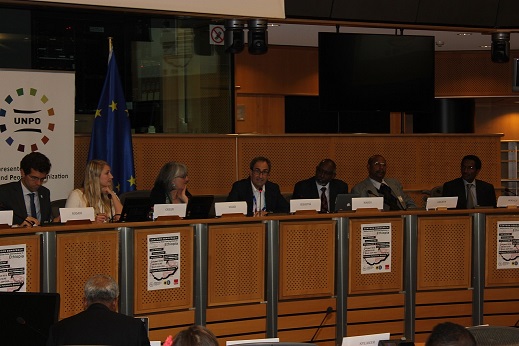 Mr Nyikaw Ochalla representing the Anywaa Survival Organization - ASO agreed with the argument made by the previous four speakers – that Ethiopia is in desperate need for change. He raised the issues of land grabbing, eviction and deprivation of a decent livelihood, which has had a severe impact on the indigenous people in Gambela state. Despite the authorities’ responsibility in creating these issues, the government continues to receive massive financial support from the international community. In conclusion he argued that common visions, unity of all the different groups in Ethiopia, as well as inclusive participation of all citizens are crucial elements to be included in any potential reform plan.

The second panel entitled ‘Futile Democracy, Human Rights and the Pretext of Protecting National Security’ started off with a written statement by Mr Martin Schibbye, a Swedish journalist who was sentenced to 11 years in prison after having entered Ethiopia through Somalia with the aim to report on oil extraction in the Ogaden region. The statement (read out by Tommaso Nodari, UNPO Programme Coordinator), thoroughly outlined Mr Schibbye’s memories from the dark times in prison together with photographer Mr Johan Persson, both of whom were pardoned after 14 months.

Next up was Dr Alemayeho Kumsa from Charles University in Prague, who provided a historical overview of the situation in Ethiopia. He highlighted how the trend of human rights violations in today’s Ethiopia is a continuation of years of misrule: between 1975 and 1991 the military government nationalised rural and urban land thus depriving people of their land, while at the same time eliminating generations of intellectuals from different minorities.

Mr Dan Dolan from Reprieve, a UK-based organization working on cases of death penalty, later illustrated the specific case of Mr Andargachew Tsige, the Secretary General of Ethiopian opposition movement Ginbot 7, who also holds British citizenship. Mr Dolan explained how Mr Tsige had been brutally abducted by the Ethiopian forces, held on unfounded charges and granted no access to legal representation. Stressing on the urgency of Mr Tsige’s case, Mr Dolan concluded by pleading the international community, and especially the British government, for further support and serious action in this regard. 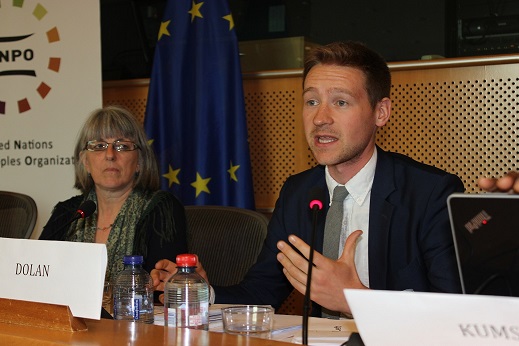 Following Mr Dolan’s presentation, a short video titled ‘Rape as a Weapon of War’ was shown to the audience. The video, portraying the personal accounts of several Ogadeni women, was a manifestation of how rape is being used by military forces in the Ogaden region as a systematic tool to wage war against civilians. The video was introduced by Ms Juweria Ali, a representative of the Ogadeni women and youth.

Dr Trevor Trueman from the Oromia Support Group, who has carried out extensive research inside refugee camps, delivered a strong statement underlining that torture is the default treatment of detainees in Ethiopia. He also drew attention to the fact that one third of the Ethiopian budget derives from foreign aid. Emphasising on the fact that the foreign support is definitely on the ‘’wrong way’’, he urged the EU and donor countries to face the facts and stop funding the Ethiopian government.

Mr Graham Peebles, Director of The Create Trust, opened the third and last panel ‘Ways forward for Ethiopia post-2015: Status Quo or an Opportunity for Change?’ Shedding light on the need for imminent unity, he expressly urged EU Member States, in particular the United Kingdom, as well as the United States, to ‘’take their neglectful and complicit heads out of the sand and stand together with the people, who have suffered far too much for far, far too long’’.

Later on Dr Getachew Jigi Demekssa, former member of the Ethiopian Federal Parliament, condemned the upcoming 2015 election as a sham that will serve as nothing but a repetition of the 2005 and 2010 scenarios. He added that trade and aid flows should be duly stopped by donor countries and diplomatic pressure exerted in support of advocates of freedom, otherwise there is a risk of turning the country and larger region into another breeding ground for extremists.

Oromo activist Dr Baro Keno Deressa, who was given the floor next, concentrated his speech on the issues of land grabbing and illegal eviction of Oromo people from their lands.  As a consequence of these government driven policies, people are left without any compensation and any new arrangement that would meet their basic needs, and hence ‘’European foreign direct investors [should] stop the cash flow to the oligarchy’’ and instead empower the Ethiopian people, he maintained. 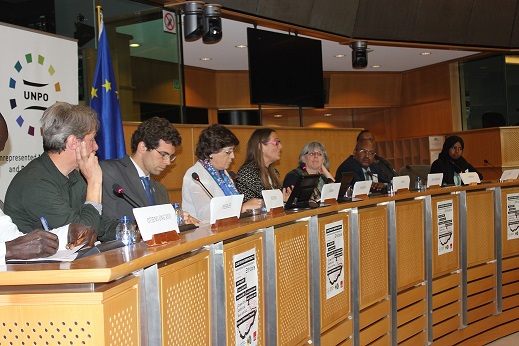 The floor was then given to Mr Antony Otieno Ong’ayo, PhD candidate at the University of Utrecht, who rightly argued that a change of mind-set is necessary before any solid accomplishment can be reached. Focussing his speech on Ethiopian diaspora engagement, he argued that speaking with one united voice remains key to finding allies in different arenas, as true participation offers a possibility for change.

The last speech of the conference was prepared by Mr Abdullahi Mohamed from African Rights Monitor and read out by Mr Duale Mahdi, a representative of the Ogaden civil society. Describing the upcoming election as ‘’phony’’, Mr Mohamed blamed the regime for being completely reluctant to any democratic change. ‘’As long as this country acts under the silence collusive of its donors, particularly the EU, the sufferings of civilians are going to continue. It is time, in the interest of Ethiopia, [that] the EU reacts.’’

Overall, there seemed to be a strong agreement among the speakers on two main points: firstly, that any real democratic change and cessation of ongoing human rights abuses in Ethiopia can only be achieved through joint action involving all ethnic and political opposition movements; and secondly, that the EU and other major donors must hold the Ethiopian government accountable for its actions, by conditioning and better overseeing the flow of funds, thus ensuring that foreign aid is not being misused to perpetrate human rights violations and oppress the people it is supposed to serve. Following this successful conference, UNPO, together with its partners, will continue to work towards ensuring the Ethiopian peoples’ voices are better heard on the international stage, and encourage different ethnic and political groups to put their differences aside and work together towards positive change in Ethiopia.