On 31 March 2015, the Organising Committee of the European Language Diversity Summit, comprising six different organisations active in the fields of minority and language promotion, among which UNPO, convened for its first preparatory meeting in Donostia-San Sebastian, in the Basque Country.  This summit, which is part of the programme of the 2016 Donostia-San Sebastian European Capital of Culture, will take place on 10 December 2016. Its ambitious objective is to adopt a Protocol on Language Diversity in Europe, which will be taken to international fora and institutions to allow entities of all kinds to regulate their commitment to language diversity.

Everyone is entitled to all the rights and freedoms […] without distinction of any kind, such as race, colour, sex, language, religion, political or other opinion, national or social origin, property, birth or any other status. (Universal Declaration of Human Rights, art. 2)

On 31 March 2015, the Donostia/San Sebastian 2016 European Capital of Culture Foundation and the Council of Social Organisations of the Basque Language, Kontseilua, presented the concept and objectives of the so called European Language Diversity Summit - an initiative promoted jointly by the two organisations - at the Miramar Palace in Donostia.

The Director of the DSS2016EU Foundation, Mr Pablo Berástegui, the General Secretary of Kontseilua, Mr Paul Bilbao, and the representative of PEN International, Ms Simona Scrabek, presented the project at a press conference which was attended by various members of the Kontseilua Board, several representatives of the DSS2016EU Foundation, as well as national and international media. The promoters and the members of the organising committee publicly signed the founding document of the organising committee. 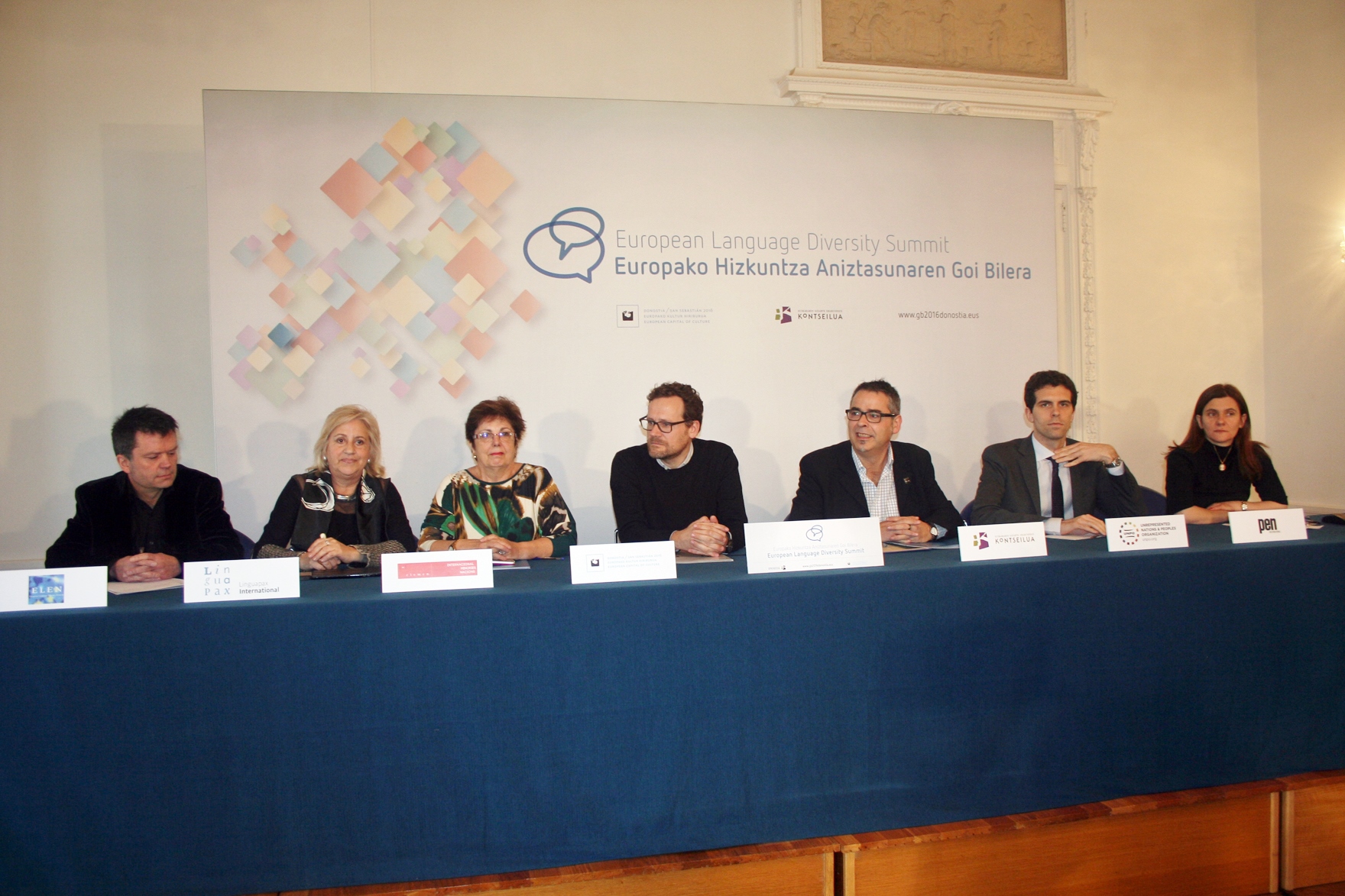 Before and after the press conference, the representatives of the organisations on the organising committee held a closed meeting, during which they discussed a plan of action and different approaches and contributions that the various entities involved can give, according to their expertise and focus, for the best possible end result: a Protocol on Language Diversity in Europe, containing a series of essential measures to ensure the linguistic rights of every group or community on the continent.

Over the course of the next 18 months the organising committee will meet several times to discuss the draft of this Protocol, assisted by jurists, linguists and other experts in different fields who will form a Scientific Committee. The Organising Committee will also work on raising awareness of this project and informing relevant organisations and stakeholders of the Summit that will take place in December 2016. UNPO, as one of the representatives on the organising committee, has committed to lending its full support to the project, drawing upon the expertise it has developed over more than 24 years of activities with nations and peoples fighting, among others, for their language rights.

The Summit will not be a series of conferences but rather a space in which decisions will be taken by the civil society organisations involved. The Summit’s objectives include (1) to declare that guaranteeing language diversity and ensuring language development are keys to peaceful coexistence; (2) to create an effective instrument for language equality and revitalizing languages in unfavourable situations; (3) to ensure that language communities are the actors in this process and assert that civil society’s involvement guarantees fair play; and (4) to constitute a milestone in Donostia and its European Capital of Culture.

Following the summit in December 2016, the Protocol resulting from the process will be sent to international fora and instances and will hopefully be a new milestone for the protection of language diversity.

To know more, please read the document presenting the project.

UNPO also recently organised a Conference on Minority Languages in Europe at the European Parliament.

Below are a few news reports published following the press conference, mainly in Basque and Spanish: