On Saturday 21 February 2015, the Provisional Government of the State of Savoy hosted a public meeting in Saint-Gervais-les-Bains, Faucigny. About a hundred people were present, among which nine speakers representing different organizations fighting for the recognition of their people or for the conservation of their linguistic and cultural traditions.

The meeting was opened by a short speech by Mr Jean-Marc Peillex, Mayor of Saint-Gervais, who briefly introduced the event and the underlying issues. Mr Peillex, addressing the audience, underlined how there cannot be democracy without freedom of opinion and that his administration consequently welcomes peaceful public debates on similar topics.

Mr Didier Erba, vice-President of the Direction aux Affaires Savoisiennes, spoke about the situation of Mr Fabrice Dugerdil, organiser of the meeting and among the leaders of the Savosian movement. As UNPO extensively explained in the calls to the French authorities for his liberation , Mr Dugerdil is facing a disproportionate punishment for acts of civil disobedience. He is currently in jail and therefore could not attend the meeting, but an empty seat was left symbolically on the stage to indicate his absence.

The second speaker was Mr Stéphane Domagala, representing the Association des Nations de l’Hexagone (ANH), a recently-formed association that is hoping to act as an umbrella organization for the various different peoples who do not recognise themselves in the French Nation. Mr Domagala also represented, with two colleagues, the Bonnets Rouges, also known as “Vivre, Décider et Travailler en Bretagne”, an organization that fights for the possibility for Bretons to decide about their own land. The ANH representative emphasised his organization’s support to Mr Dugerdil, by whom he had been personally invited to this meeting. He stressed the unjust treatment the Bonnet Rouges received in Brittany, where national political actors tried to classify them as an extreme movement, and the role that the newly-created ANH could play in uniting the French peoples seeking autonomy, independence or respect for their identity. 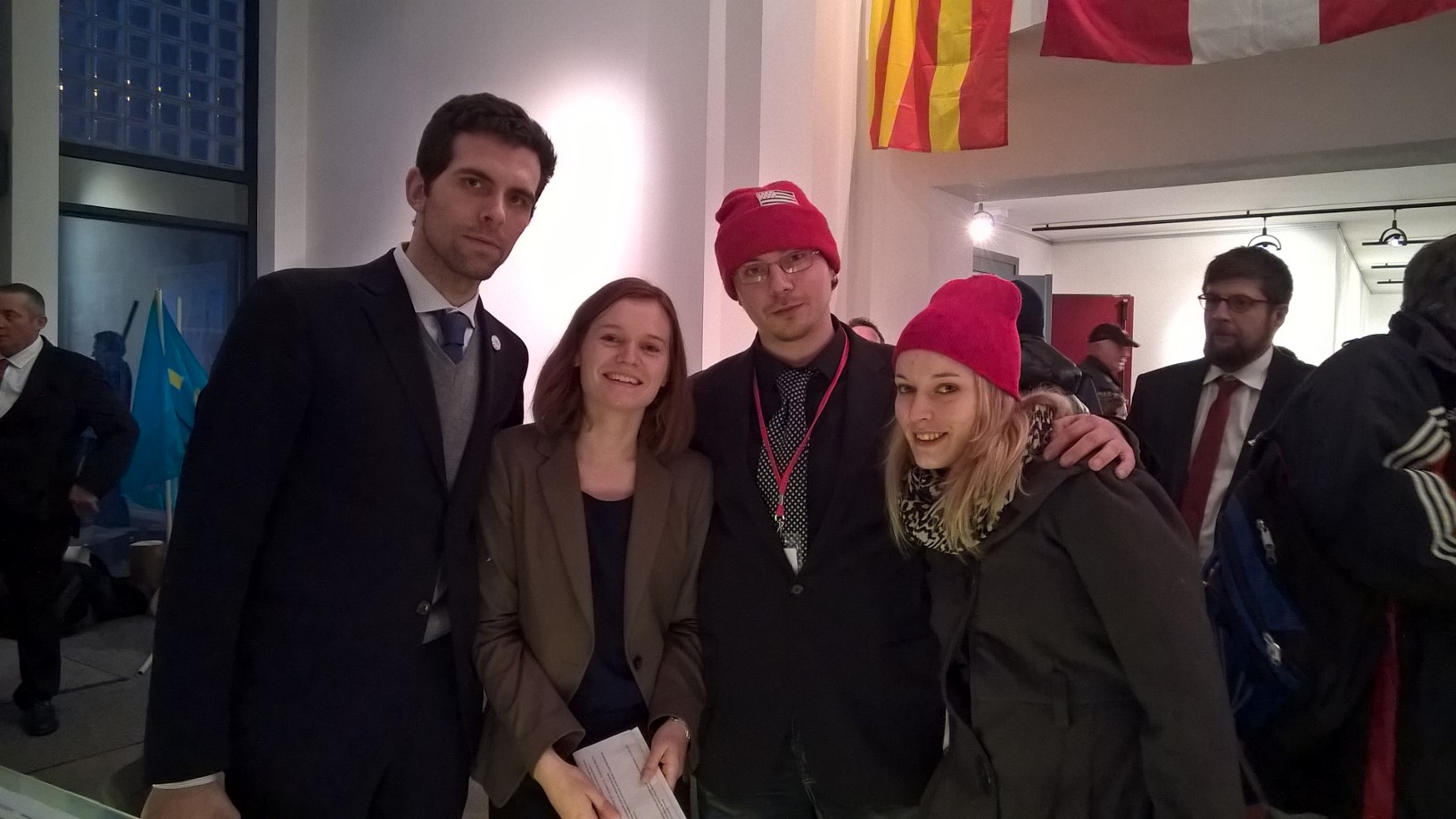 Mr Sébastien Günther, member of Unser Land (Alsace), then spoke about the history of Alsace, a region influenced by both Germanic and Latin cultures, also due to its frequent shift between French and German control following different wars. The Unser Land is seeking recognition of the difference of Alsace’s culture, language and history if compared to the rest of France and also greater respect for the integrity of its territory, threatened by some of the merges and separations of regions planned by the current French Government.

Mr Mauro Tosco, representative of Gioventüra Piemontèisa (Piedmont) and linguistics professor at the University of Turin, expressed his concerns on language preservation in Italy. He stressed the importance of the protection of dialects, among which the Piedmontese, which in Italy are not given the consideration they deserve, that is instead guaranteed to other linguistic minorities in the country that have a powerful ally in a neighbouring country. Mr Tosco also reminded the audience that dialects are not protected by the Council of Europe’s European Charter of Regional and Minority Languages, with the definitions of dialect and language being left to the relevant State Party.

Valle D’Aosta representative Mr Diego Luciana reminded the audience of the tentative of annihilation of any foreign influence in Italy by Mussolini. During the fascist Ventennio in fact the names of many towns in the Aosta Valley and South Tyrol were replaced by Italian equivalents and locals were not allowed to register their children with foreign names. Despite the situation being very different now, he expressed his concern regarding the Italianization of the Autonomous Region of Valle d’Aosta and the constant drop of native French speakers.

Mr Reynald Lustremant, Minister of Justice of the Gouvernement Provisoire de l’Etat de Savoie, went through the history of the various movements for the State of Savoy, from the creation of the Savosian League to Mr Dugerdil’s speech at the United Nations in November 2014.

Ms Valérie Dugerdil, wife of the civil disobedience icon who was remembered by many of the speakers, delivered a moving speech about her husband and his dedication to the Savosian cause and read to the audience the statement that her husband made at the UN Forum for Minority Issues in November 2014.

The last panellist, UNPO Program Coordinator Mr Tomm aso Nod ari closed the series with a speech delivered on behalf of Secretary-General Mr Marino Busdachin. He spoke about the Savosian membership at UNPO, went through UNPO’s history and highlighted its accomplishments and strategies. The speech tackled a wide range of subjects, from the right to self-determination in international law to the very diverse yearnings of UNPO Members.

The speeches were then followed by a vibrant questions and answers session of over an hour, in which the audience took part. Among the crowd were passionate activists like Mr Billy Fumey, an Arpitan singer advocating for his region, Franche-Comté, as well as for the protection of linguistic minorities in general. Others, such as the representatives from the Confédération Savoisienne, tried to go further in depth into legal issues. They raised very specific questions on international law and they expressed their scepticism concerning the legal grounds for the annexation of Savoy to France. Several supporters from the Provisional Government of the State of Savoy tried to find out more about the role that UNPO could play in their struggle.

UNPO wishes to thank the Direction aux Affaires Savoisiennes for inviting the organization and is honoured to have been able to take part in this very enriching and informative debate. UNPO is also looking forward to working with the various Nations and Peoples that were present at this public meeting.