Getting United, Bold, Loud and Active Key to Uncover the Suffering of Minority Women and Misuse of EU Funds in Ethiopia

On 4 February 2015, the Unrepresented Nations and Peoples Organization (UNPO) in cooperation with the Ogaden National Liberation Front (ONLF), hosted by Ana Gomes MEP (S&D) and Julie Ward MEP (S&D) at the European Parliament in Brussels, welcomed a number of international guests to speak about the serious issues facing minority groups in Ethiopia, particularly ethnic minority women. At the event titled ‘Minority Women’s Rights: An Ethiopian Inferno?’, participants spoke about the systematic persecution of Ogaden and Oromo ethnic groups in Ethiopia by the ruling regime; combining expert analysis and personal accounts to not only share views, but also help plot a course of action.

In his introduction UNPO Secretary General, Marino Busdachin, raised the hypocritical stance of the western world towards Ethiopian governance and the Ethiopian people – a theme that would run through the course of the discussions that followed. By outlining the huge amount of aid that Ethiopia receives – over $3 billion per year on average – Mr Busdachin questioned the motives of the European Union (EU). Aid constitutes over half of the total budget of the Ethiopian government (with the EU being the second largest single contributor), yet there is no transparency in the use of this aid and no safeguards or effective conditions attached to money in order to ensure its proper usage. To this end Mr Busdachin concluded by saying that the 15 May upcoming elections in Ethiopia are an opportunity for the EU to change its relationship with Ethiopia, encourage democratic opposition to the regime and wake up to its responsibilities outside of Europe.

Mr Busdachin then passed the floor to Julie Ward MEP who spoke of her political concerns surrounding the use of aid funds in the Ethiopian regime’s policy of systematic violence used against Ethiopian minorities, particularly women. Ms Ward said that the violence in Ethiopia is “causing a fractured society” and causing sections of this society to crumble like a house of cards. She said that the use of violence in any country makes minority women particularly vulnerable as the combination of deeply rooted discrimination and use of physical force in a socio-political mean that minority women lose their power to influence and improve society. Like Mr Busdachin before her, she attacked the EU’s role in providing funds to Ethiopia while turning a blind eye to how these funds are being used on the ground. Ms Ward concluded powerfully by admitting that “silence is complicity; silence is guilt”, if the EU does not speak out then it is complicit too. 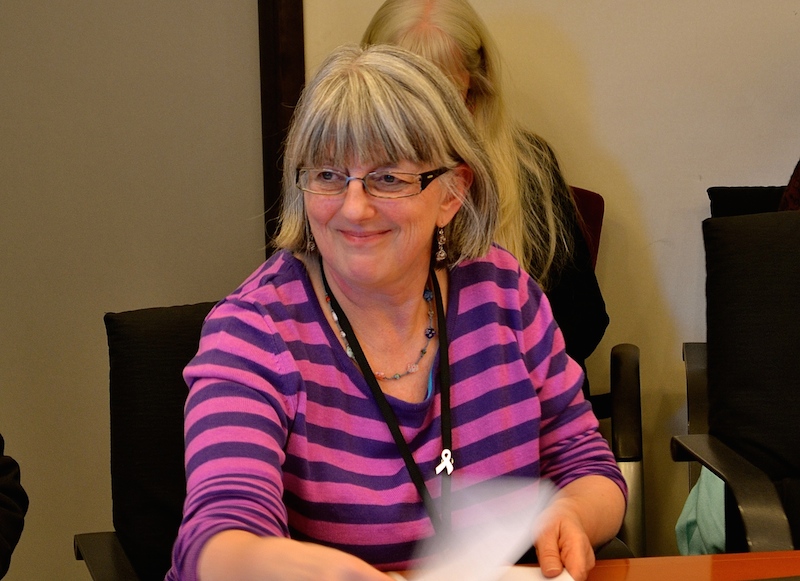 Ana Gomes MEP then extrapolated on the points made by Ms Ward by talking about the inherent lack of transparency in the Ethiopian governance structure. Drawing on her personal experiences of visiting Addis Ababa, Ms Gomes talked about the Ethiopian regime’s ability to use politically correct language and let the international community hear what they want to hear. The EU in turn has used Ethiopia as an exemplary case study of what aid promotion can achieve. This reciprocal denial between the regime and the EU means that it has become very hard to actually discover the true situation in the country. Restriction on freedom of expression and the freedom of the media particularly distressed Ms Gomes, who underlined that the EU needs to support brave journalists and activists on the ground, who in turn can reveal much of the truth that is hidden by organisations, media outlets and political parties supportive of the Ethiopian government. She finished by stating that the Ethiopian diaspora also has a responsibility; they are in a position to know part of the true situation in Ethiopia but not be constrained by restrictions on their freedom of expression. Ms Gomes called on all Ethiopian ethnic minority diaspora to unite, forgoing any current disagreements and finding the right platform from where to voice their concerns and ideas.

The first panel Divide and Conquer – State Sanctioned Repression in Ethiopia was opened by Mr Abdullahi Mohamed of the African Rights Monitor, who gave an account of Ethiopia’s non-compliance with several international human rights conventions. Mr Mohamed described how the Ethiopian regime has signed many international human rights conventions but continuously fails to follow through with any of the recommendations made by international actors regulating convention implementation. Among these are examples of Ethiopian unwillingness to submit mandatory reports – the 2011 Ethiopian state review requested by the Committee on Civil and Political Rights was 17 years late – and the regular denial of access to minority regions to UN monitoring groups and special rapporteurs. Mr Mohamed also highlighted the pressing need for Ethiopia to allow access to minority regions such as Ogaden for international humanitarian organisations whose continued absence from the area is causing serious humanitarian crises.

The next speaker was Mr Abdullahi Hussein, former head of the Ethiopian state media, who had managed to smuggle over 100 hours of footage to Sweden when he fled his home country, appalled by the brutal crimes committed by the regime he had worked for. He presented his findings from the footage and personal accounts of what he experienced. His moving story recounted how he progressed in the governance structure of Ethiopia and became increasingly exposed to military fear tactics and persecution in minority areas such as the Ogaden region. He spoke of media dominance by the regime and the smokescreen that is created to prevent the outside world learning of serious persecutions that take place, especially with regard to sexual violence used against women in the infamous Prison Ogaden.

The floor was then given to Mr Ato Abebe Bogale, Vice-Chairman of the Ethiopian political opposition movement Ginbot 7, who expressed his exasperation that despite the myriad human rights reports and empty words of foreign powers, no concrete action is being taken. He stressed the extent to which systematic persecution of political opposition, minority groups and women has permeated throughout all levels of governance in Ethiopia and is a pandemic that needs to be stopped. He called on the EU to stop focusing on the apparent economic improvements that are being made in the country and to consider the human cost of achieving positive growth figures saying, “for the sake of humanity and for the betterment of Ethiopia and Africa, please stop helping the dictatorship within the country”. Mr Bogale’s speech was followed by Ms Dorothée Cambou, PhD candidate at the Free University of Brussels (VUB) specialising in the rights of indigenous groups. Ms Cambou contextualised the actions of the Ethiopian government within its national, regional and international legal obligations, and emphasised the land rights of indigenous peoples in relation to development projects.

The first speaker on the second panel Victims of Politics – Women in Ogaden and Oromia was Ms Juweria Bixi Ali who, on behalf of young Ogaden women in Ethiopia, spoke of the vulnerability that minority women in Ethiopia experience being the targets of the dictatorship’s attempts to break the will of ethnic minorities in the country. She spoke passionately about the horrors that minority women experience at the hands of military personnel who are specifically trained how to rape and abuse women in order to “shame the men and disgrace the women”. Ms Ali described how the military use tactics of sexual violence and orchestrated starvation against women in particular in order to instil the maximum amount of fear in a people.

Following Ms Ali was Mr Graham Peebles, a freelance journalist who had visited the Dadaab refugee camp on two occasions. He spoke of many of the interviews that he had conducted with both the victims and confessed perpetrators of these crimes. He spoke of how orchestrated rape and fear tactics have become a norm in Ethiopia, and the horrors that he spoke of are by no means isolated cases. He described that no woman, particularly those of targeted ethnic groups, is safe from the state sponsored persecution. He concluded with yet another plea to the EU to eliminate their hypocritical practices of providing financial support to this regime and questioned how donor countries around the world could have a clear conscience when supporting such blatant criminality.

The floor was then passed to Dr Baro Keno Deressa who gave a chilling account of the medical issues that occur from regular use of rape against women. He described how rape that is used for extracting information, political terror and as a reward for soldiers does not only undermine the social standing of women but can cause terrible, untreatable medical conditions that victims have to live with for the rest of their lives, including HIV transmission and genital deformation. He also outlined that the rape tactics used by the Ethiopian government against Oromo women are destroying the traditional social fabric of the Oromo people, creating a large gap in gender equality in a people that are traditionally egalitarian and have a long and proud history of democratic values.

The final speaker of the panel was Dr Badal Hassan, representative of the ONLF, who called on the Ethiopian regime to remove all suffering and oppression that his people face and allow them to pursue their right to self-determination. He summarised the main facts surrounding the persecution of the Ogaden and Oromo peoples: tens of thousands of civilian executions, tortures, rapes and forced migration. He also spoke of the persecutions that Ethiopia conducts against Ogaden and Oromo people who have fled to neighbouring countries making this an international issue rather than a domestic problem. He concluded by calling on all Ethiopians, regardless of ethnicity or religion, to unite and raise their collective voices against oppression.

Ms Ana Gomes MEP closed the panel discussion by reaffirming her commitment to take the issues that had been raised to the relevant parliamentary committees and push for promises to be made and firm action to be taken. Although she said it may be a slow process, she urged everyone present, especially the Ethiopian diaspora to “get united, bold, loud and active”, assuring that there are politicians like herself and Ms Julie Ward who will listen, and in time, will make others listen too.

UNPO is fully committed to work towards raising the issues of human rights and democracy in Ethiopia with all relevant international stakeholders and demand concrete action to address the persecution of innocent civilians; be they Ogadeni, Oromo, or from any other ethnic group. The 4 February conference at the European Parliament was an important first step in the right direction, but much more remains to be done to overcome the silent complicity of Western donors in relation to the Ethiopian inferno.