UNPO Visits Mapuche Occupation Protest in Chile: "People of the Land Conquering One Pine Tree at a Time"

On 12 December 2014, a UNPO representative was taken to an [undisclosed] site and introduced to local Mapuche activists participating in a self-organized protest for the recovery of their ancestral lands usurped by tree farming companies growing non-native pines and eucalyptus trees on an industrial scale in the south of Chile. UNPO Program Coordinator, Ms Iva Petkovic, led a long, meaningful and moving debate about their difficult struggle to recover the expropriated Mapuche lands, about their unfaltering dedication, their sacrifices and fears, as well as the solidarity they feel among their fellow dissidents.

The Mapuche have suffered a long history of dispossession and humiliation. The scattered grassroots movements for the recovery of ancestral lands are a symbolic gesture of self-empowerment and restoration of Mapuche dignity. It is also sign of the exasperation of Mapuche communities with the lack of political will displayed by the Government to resolve land conflicts with indigenous groups all across Chile. The activists conceded to UNPO that occupation of appropriated land is the only viable option to escape poverty, reclaim their land rights and enjoy their traditional way of life. Although the Government has stated that it will not return land of Mapuche who illegally occupy farms and land, so far, this tactic seems to deliver results, albeit minimal.

The story of Chile's forests is a painful one for the Mapuche communities. The encroachment on Mapuche ancestral lands began with the passing of the Forest Ordinance 701 (Decreto Ley 701) in 1974, during the reign of General Augusto Pinochet, which subsidized the expansion of tree plantations, giving away Mapuche lands to the National Forestry Corporation. This initiated the quick expansion of monoculture plantations of pines and eucalyptus trees for paper manufacturing and timber. Since then, many corporations have bought land, destroyed the once abundant forests, evicted and marginalized indigenous inhabitants. During Pinochet's regime, the area of 10 million hectares allocated to the Mapuche was reduced to only 350,000 hectares. Since the fall of the regime, one Government administration switched to the next; some Mapuche land has been seized, and some returned, leaving behind a “scattered patchwork” of indigenous lands, which were once part of the “Nación Mapuche”. 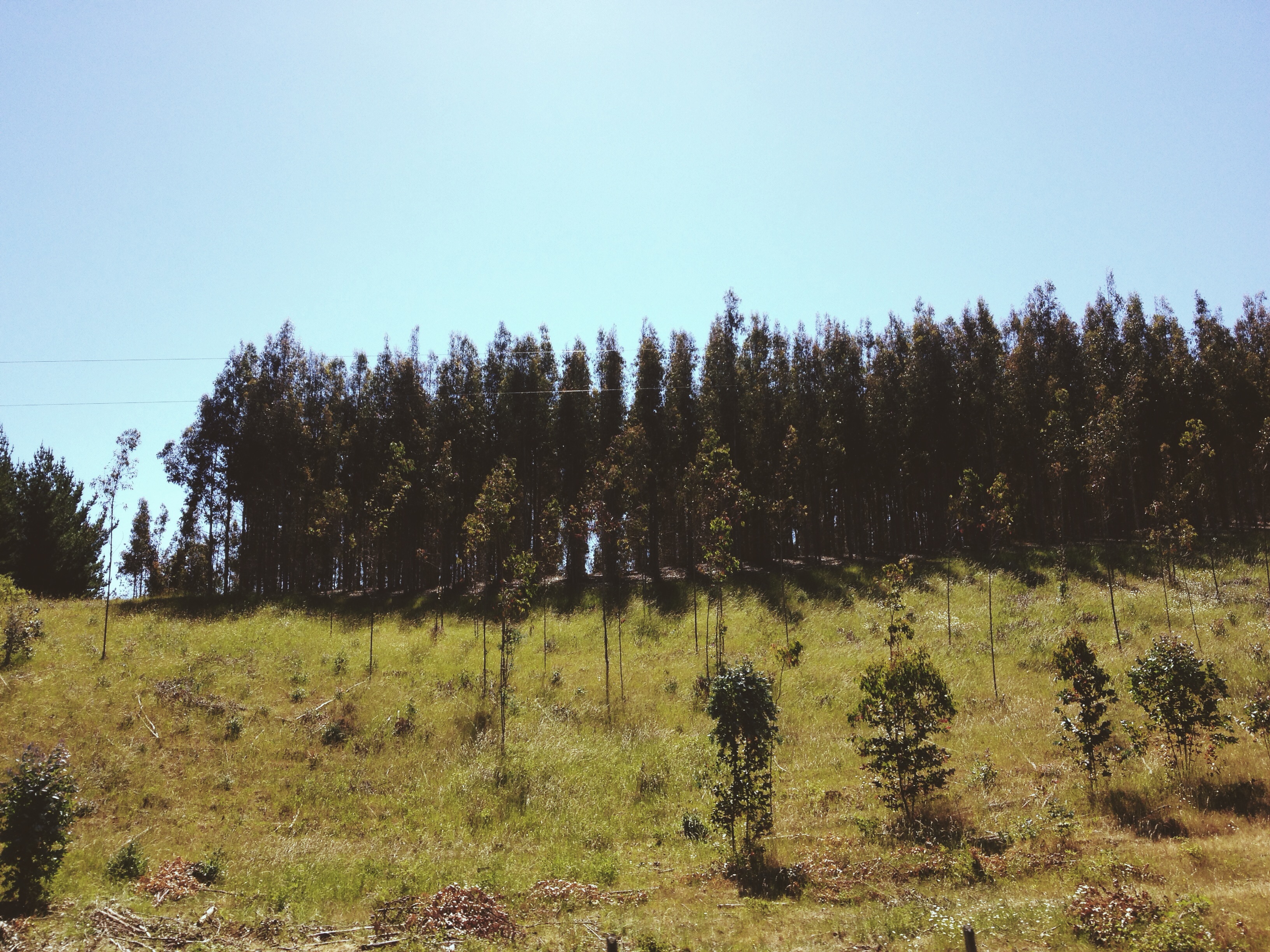 Not only did the forestry expansion evict Mapuche communities from their lands, it also impoverished these communities with the disappearance of native forests, sources of water, and biodiversity. These foreign plant species absorb a much greater quantity of water than native species, which renders the surrounding land unsuitable for small-scale agriculture - the mainstay of many Mapuche households. It also dries up wells used by Mapuche communities for drinking, cooking, cleaning and laundry. The plantations also provide few jobs, as the trees need years to mature and require little maintenance. All this combined has forced many Mapuches to migrate to the city in search of better opportunities. Unfortunately, Chile's cities have not provided asylum as many live below the poverty line and face enduring discrimination. The environmental and economic impact of commercial tree farming has undoubtedly acted as a catalyst for a rise in Mapuche activism in recent years. 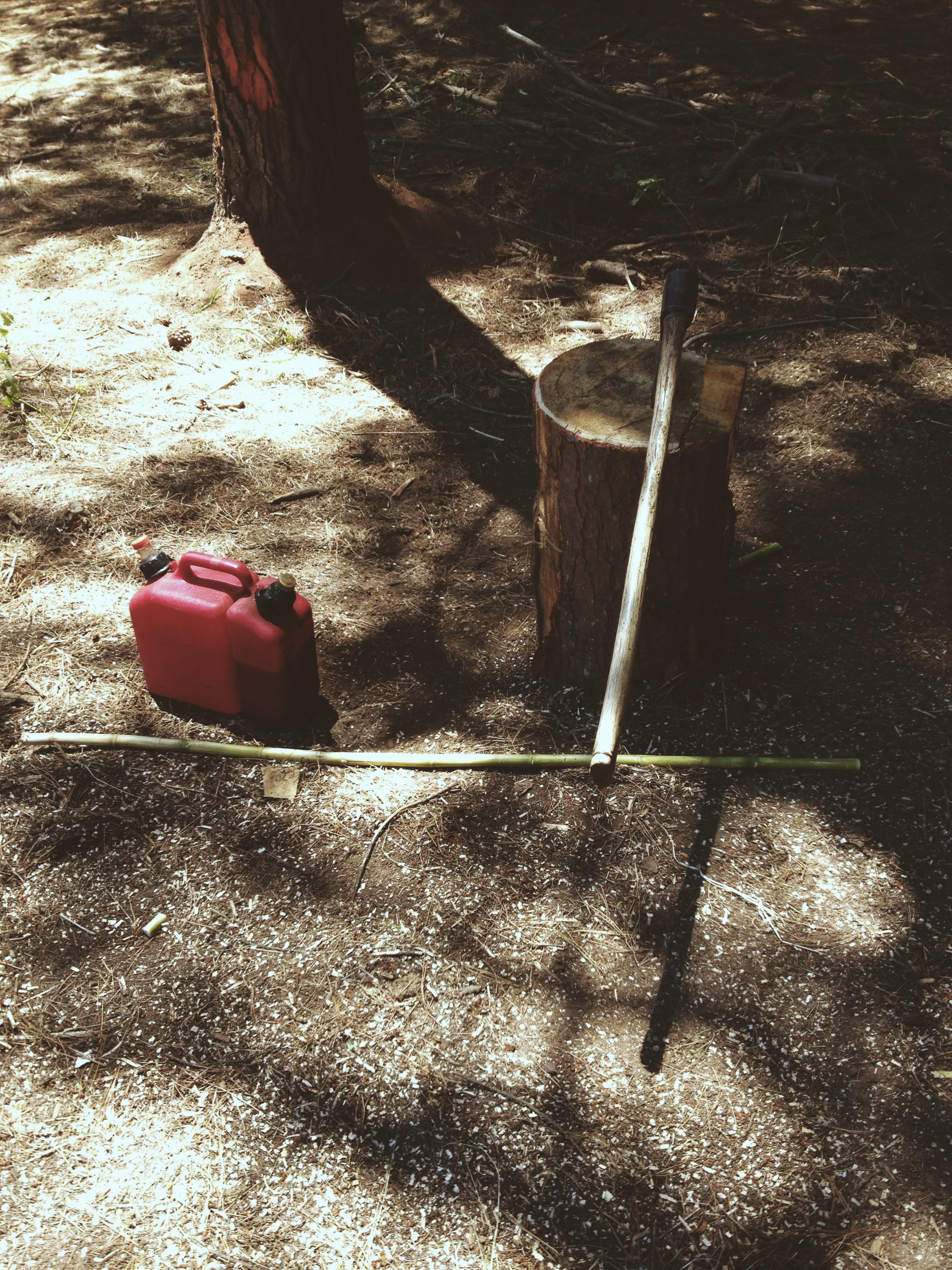 The plantation occupiers spoke of their hardships, the poverty their families face, the lack of education provided to their children, but concluded that despite their suffering and grief, they come every morning to the site to continue to resist. The “collective memory of having been robbed” brings them to the plantation where they work in scorching heat with heavy machinery bringing down one tree at a time. One activist admitted that although he could work on his family farm or in a near-by town or city to earn money for his family, and despite the heavy toll on his heart that his community suffers from poverty, he believes that the recovery of their ancestral lands is a grander cause, the results of which will hopefully be enjoyed by his grandchildren.

Despite the fact that competing land ownership claims are at the root of the conflict between the Mapuche communities and the Chilean Government, land restitution efforts have been minimal. Unsurprisingly, the forestry industry is closely tied to political interests, exemplified by the former Governor of Araucanía, Andres Molina Magofke, who had a 42 % share in a timber company in the region. In some cases, communities have been granted legal entitlements to their lands, but as in the case of the Pichi-Loncoyan and Pilin-Mapu communities of Lumaco municipality, much of the territory has been re-confiscated by logging companies, such as Arauco S.A. In other instances, the returned land could no longer be cultivated due to overuse or destruction. In September 2013, the Chilean Government returned land to two Mapuche communities (1.04 square miles worth approximately US$2.5 million) after a 15 year process as a part of Chilean President Piñera’s policy to address the most significant and ongoing indigenous land claims.

The occupiers UNPO met were not convinced these positive measure represent a comprehensive and systematic approach to returning lands to indigenous people. They would need to see more to be convinced that change is coming to their communities. 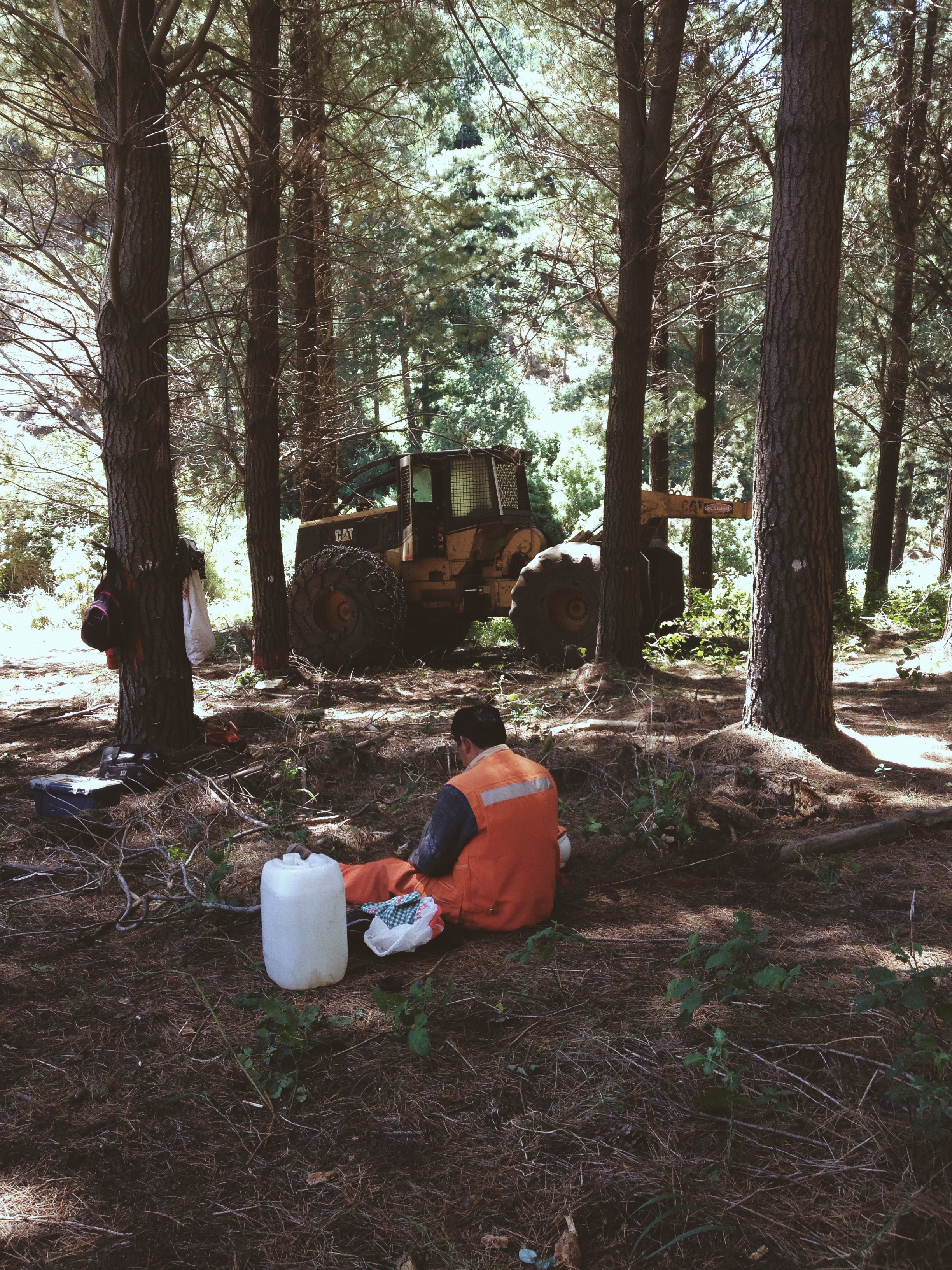 In an attempt to ease tensions, Chile's President Michelle Bachelet appointed Francisco Huenchumilla, a part-Mapuche politicians as Governor of the Araucanía region. On the 12 March 2014, he historically apologised to the country’s indigenous Mapuche people for “the theft of [their] lands by the state” and the marginalization that followed. He also stated that “I express, in the name of President Michelle Bachelet, the political will to do something different”. From Santiago to the site of resistance, everyone has heard of Francisco Huenchumilla and his words. While these have left many in Santiago optimistic, the plantation occupiers were far less assured that change was imminent. They expressed their feelings of isolation. They feel that no one seems to listen or help (least of all the international community).

Oonce land is returned, Mapuche communities will have to be awarded with political autonomy to mange their own affairs on their ancestral lands as a prerequisite for ensuring self-determination of this indigenous peoples.

The Mapuche have been fighting for the recovery of their territory for years through peaceful protests, burning of plantations, blockades of roads and the destruction of logging equipment. As a result of their resistance efforts, they have been victims of violent repression and criminalization. Some Mapuche activists have been killed, others charged as “terrorists”. While the Chilean Government fears that the Mapuche will organize into a sizable and substantial political force, Mapuche communities tend to resist independently, and many reject violent forms of protest. The protestors also agreed that they believe in employing peaceful forms of resistance, but argued that dialogue proved fruitless in the past.

The conversation with UNPO revealed their profound distrust for “outsiders” after so many centuries of betrayal and abuse. While occupying the tree farm, an air of tension and suspicion loomed. Every vehicle passing by could spell arrest or police violence for all participants. Their daily struggles have centralized trust and solidarity as crucial components of Mapuche relations. For this reason, some participants worried, will their insights, views and testimonies be communicated to the Government? Will their names be revealed?

Despite fearing for their freedom and safety, for them, land recuperation is about taking land matters into “their own hands”; it is about conquering open wounds symbolized by pine trees and chopping them down one at a time. 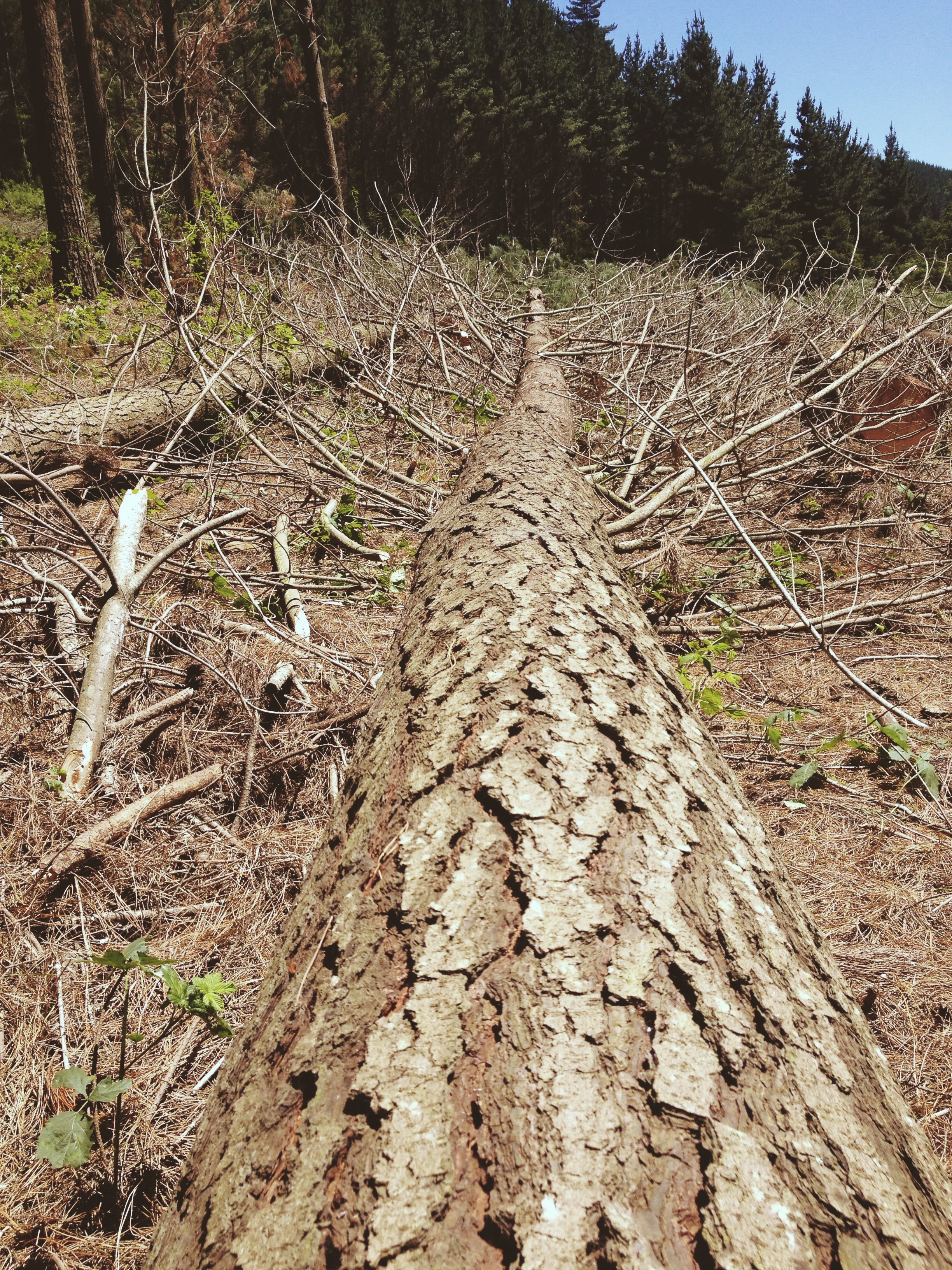