The Haratin delegation, represented by Baba Jiddou on the left and Abidine Merzough on the right, meeting with Ramon Tremosa i Balcells MEP (ALDE, Spain/Catalonia)

UNPO’s efforts to lobby EU institutions on behalf of Biram Dah Abeid and his fellow jailed activists from the abolitionist movement IRA-Mauritania have reaped great success this week, as the European Parliament’s Conference of Presidents has confirmed that an urgent resolution on Mauritania – and specifically the case of Biram Dah Abeid – will be voted on next Thursday, 18th December at the plenary session in Strasbourg.

This news, coming exactly one month after Mr Abeid was arrested with his colleagues at a peaceful demonstration in the town of Chgara, is the culmination of weeks of advocacy, which have also seen a priority parliamentary question by Charles Tannock MEP and Mark Demesmaeker MEP being submitted to Federica Mogherini, the EU’s High Representative for Foreign Affairs, and a UNPO urgent appeal gathering the signatures of numerous high-profile MEPs.

UNPO also welcomes the parliamentary questions that have been tabled in both the UK and the Netherlands. On 11 December 2014, Angus Robertson MP asked the UK Secretary of State for Foreign and Commonwealth Affairs "what representations the Government has made to the government of Mauritania on the detention of Mr Biram Dah Abeid and his associates".

On 12 December 2014, Dutch MPs Smalling and Van Bommel asked the Minister of Foreign Affairs to state whether he knew if the anti-slavery activists in Mauritania were being kept in acceptable conditions of detention and if they were to receive a fair trial. They also asked the Minister if he agreed with Amnesty International's call for all prisoners of conscience in Mauritania to be released, if he thought that Mauritania should be doing more to end slavery within the country, and if the Minister planned to contact the Mauritanian Government directly to express these concerns.

This week UNPO was to have welcomed Biram Dah Abeid to Brussels to coordinate his meetings with various European lawmakers. In his absence, two of his associates, the European President of IRA-Mauritania Abidine Merzough and the European Coordinator of the Mauritanian anti-slavery party APP Baba Jiddou, visited Brussels from 8th to 10th December in order to inform and update policy-makers about the situation of slavery in Mauritania, and the Mauritanian Government’s recent crackdown on civil society and political opposition, particularly the anti-slavery movement. The delegation met numerous MEPs, officials at the Commission and civil society organizations, all of whom committed themselves to helping the cause. To coincide with their visit and the advocacy efforts, IRA-Mauritania in Belgium organized a small demonstration outside the European Parliament calling for the release of the imprisoned campaigners.

Biram Dah Abeid, recipient of the 2013 UN Human Rights Prize and 2014 presidential election runner-up, was arrested along with seven other activists on 11 November 2014 following a peaceful demonstration calling for the eradication of slavery in Mauritania. In the days immediately preceding and following that event, Mauritanian authorities arrested nine other prominent members of the anti-slavery movement – bringing the total number in prison to 17 – and closed down the headquarters of IRA-Mauritania.

Mr Abeid was charged with inciting violence, disturbing public order, being a member of an unregistered organization and offending a member of the authorities. On 20 November 2014 he attended court and was denied bail. Our delegation repeated the allegation that some of the imprisoned activists have been tortured. 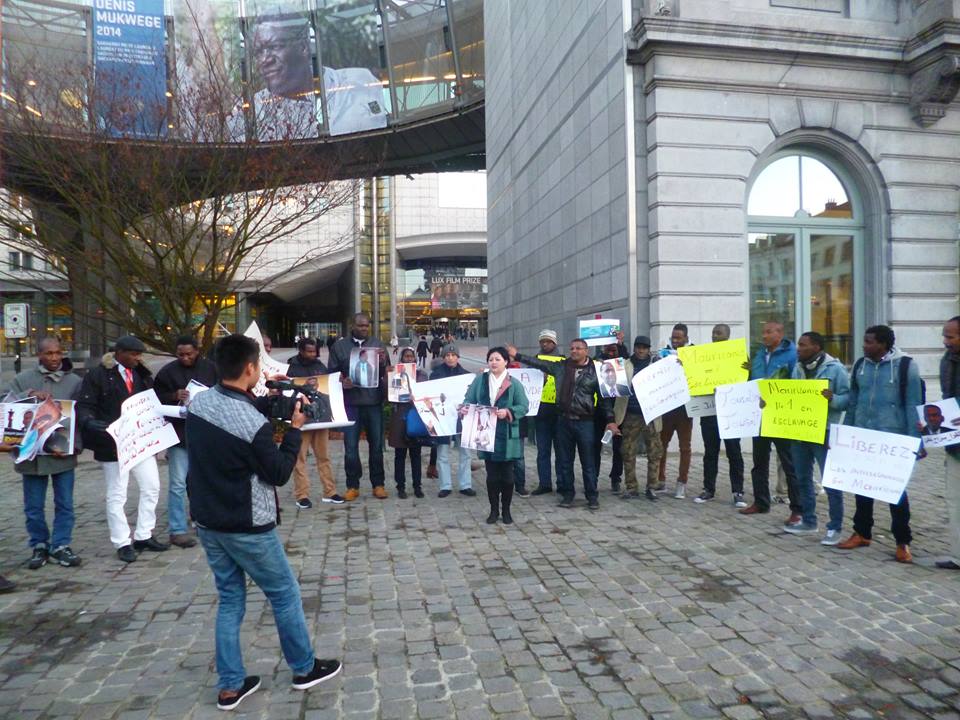 As the crackdown continued, the Global Slavery Index published its annual findings last month, which concluded that Mauritania had the highest prevalence of slavery relative to its population in the world. Slaves in Mauritania belong to the Haratin community (a member of UNPO) who are also referred to as ‘Black Moors’ and constitute between 40 to 60% of the Mauritanian population. Mr Merzough and Mr Jiddou reiterated that even freed Haratin slaves often continue to be culturally, economically and psychologically dependent on their former masters, and the Mauritanian Government’s approach to the crisis remains deeply inadequate, effectively promoting the rights of slave-owners over the rights of current or former slaves.

The delegation also stressed the potential geopolitical consequences of not tackling slavery, as the continued race and caste-based marginalization - even dehumanization - of the Haratin people could threaten to destabilize Mauritania, which is a vital strategic North African state and European partner.

Nobody - least of all our Haratin partners - is in any doubt at the scale of the challenge involved in tackling slavery in Mauritania. The elites depend on the racialized subjugation of the Haratin in order to sustain their own social, political and religious power, and indeed, slave ownership is thought to occur across the political and judicial establishment - in other words, the very people who have committed to end the practice.

Nevertheless, UNPO strongly believes that pressure from the European Parliament, as well as the Council and European External Action Service, represents a key lever of influence. Our first priority is to see the release of Biram Dah Abeid and his colleagues - but we will continue to support our Haratin partners as they campaign for a full and sustainable abolition of slavery, and work to gain as many allies in the international community as we can.

The EU has a number of instruments at its disposal to exert pressure on the Mauritanian Government, through bilateral agreements such as the recently renegotiated fisheries protocol, and foreign policy documents such as the EU Sahel Strategy. We believe that human rights - and specifically the abolition of slavery - must be at the forefront of the EU-Mauritania dialogue.

We therefore welcome, along with our Haratin partners, priority parliamentary questions and an urgent resolution in Strasbourg - but this must only be the start.