Brussels, 5 November 2014 - On 4 November 2014, UNPO presented the findings from its Election Observation Mission (EOM) to Abkhazia in August 2014, at the European Parliament in Brussels.  Apart from the mission delegates Frank Engel MEP, who hosted the presentation event, Marino Busdachin, UNPO General Secretary, and Johanna Green, UNPO Program Manager, the event included the expert contributions of Maurice Bonnot, a retired French diplomat and author, and Artur Gaguliya, Head of the Department of Europe, USA and Canada in the Ministry of Foreign Affairs of Abkhazia. The event was attended by a number of European politicians, representatives of the diplomatic corps and civil society actors.

Following an invitation from the authorities of the Republic of Abkhazia to observe the 24 August 2014 early presidential elections, UNPO deployed an Election Observation Mission to the largely unrecognised Black Sea state from 22 to 26 August.  A total of four candidates competed for the presidency, with Raul Khajimba ultimately winning in the first round with 50.6% of the votes.

Johanna Green, program manager at UNPO, presented the report and the findings of UNPO’s Election Observation Mission.  The report detailed the mission’s findings from visiting ten different polling stations across Abkhazia and observing the Abkhazian electoral process. The report concluded that the elections were largely conducted in an organized, peaceful and transparent manner and conformed to international democratic standards.  It also found that there was sufficient access to polling stations, that vote counting was conducted in a transparent and accountable manner and that there were sufficient oversight mechanisms throughout the electoral process.

Moreover, the report noted that there was some confusion with how the ballot papers were to be marked, but there were instructions provided and the situation was efficiently addressed with ambiguous votes discarded.  There were some concerns about the 22,787 Georgians living in Abkhazia who were struck off the voting register and had their Abkhaz citizenship revoked just before the election took place.  This issue remains a politically sensitive one, but Artur Gaguliya later assured the attendees that the new Abkhazian government is taking the appropriate steps to address it.  Despite these concerns, the mission found that the elections were held at a remarkably high standard.

All panellists took the opportunity to commend the Abkhazian Central Election Commission on holding the presidential election in a transparent, organized and democratic way.  Another issue raised was the EU’s failure to open a serious dialogue with Abkhazia.  As was evidenced in the report, the 2014 Abkhazian Presidential Elections were conducted to a democratic standard that exceeds that of many recognized states, yet have been dismissed as illegitimate by the majority of the international community.  The General Secretary of UNPO, Marino Busdachin, stressed the need  for European officials to change their position towards Abkhazia and offered an invitation to Europe to open up to Abkhazia and initiate a dialogue to promote greater understanding. 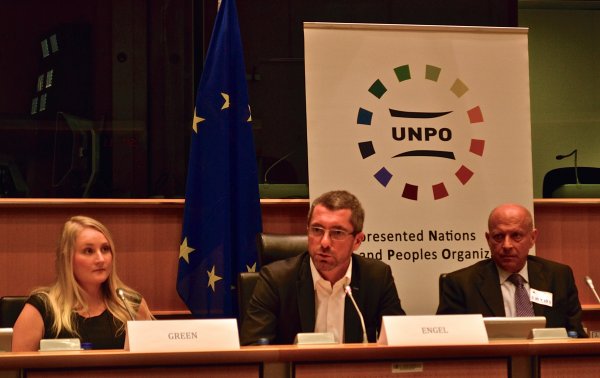 Frank Engel MEP took the floor and asserted that the elections were a true expression of the Abkhazian people’s collective will and a true manifestation of the democratic experience, stressing that “Abkhazia has real people, real institutions and held real elections”.  The most striking feature of the elections was the attitude of the Abkhazian people towards the elections.  The voter turnout was very high at 70% and Frank Engel noted that the people cared about who was going to be elected and were determined to take this result seriously.  He expressed frustration with the EU’s refusal to recognize the elections and warned that Abkhazia’s isolation is allowing Russia’s influence over it to grow and may risk Abkhazia’s de facto independence in the future.

Maurice Bonnot spoke about the general situation of de facto states, such as Abkhazia, and provided some historical and political context to the 2014 Abkhazian Presidential Elections.  He also noted that many times de facto independent states, such as Taiwan, enjoy very high levels of democracy in contrast to recognized states, such as China. 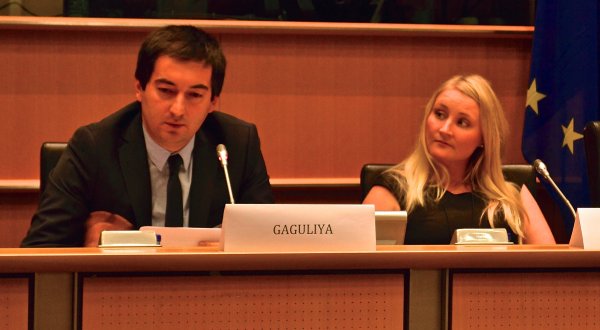 Artur Gaguliya, from the Abkhazian Ministry of Foreign Affairs, gave the concluding remarks and spoke of the crucial meaning of democracy for the people of Abkhazia.  True democracy, he said, is the main criteria for a government’s legitimacy and the holding of free and fair elections is the best indicator of a true democracy.  He reiterated Abkhazia’s commitment to the fundamental principles of democracy and expressed hope to form a relationship with the EU in the future.

After observing the progress of Abkhazia’s electoral process and its democratic development, UNPO encourages Abkhazia to continue its efforts to ensure that elections at all levels of government are free, fair and transparent. Believing that Abkhazia’s electoral experience can become a model for developing nations, UNPO is fully committed to supporting Abkhazia’s democratic aspirations also in the future.

The full report can be downloaded here