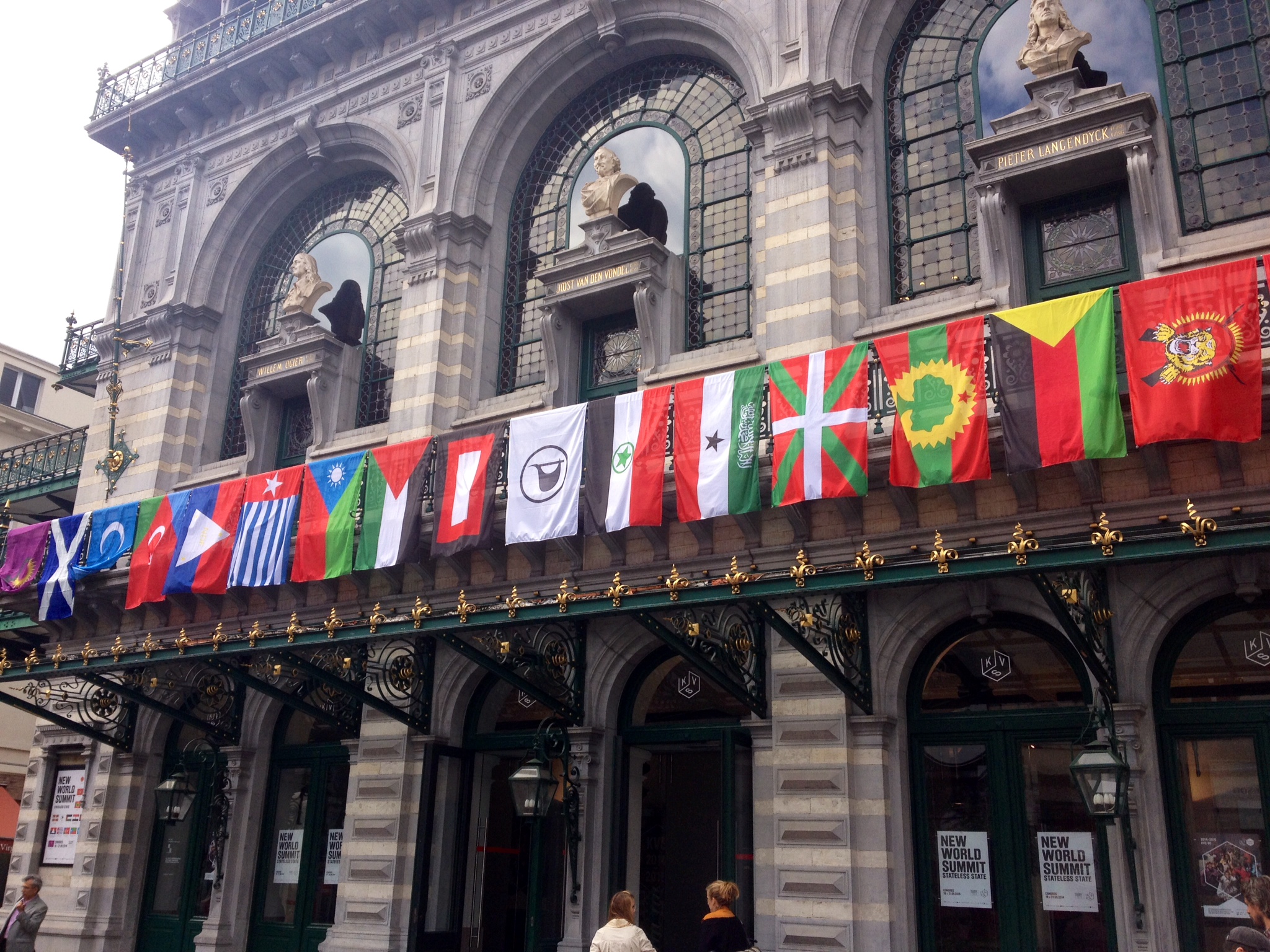 The Unrepresented Nations and Peoples Organisation (UNPO) took part in the 4th New World Summit (NWS), entitled "Stateless State", which was organised in the Royal Flemish Theatre of Brussels between 19 and 21 September 2014. The NWS was conceptualized as an attempt to combine art, performance and politics hosting organizations that currently find themselves unrepresented, unacknowledged or excluded from democratic processes due to various, but interconnected geopolitical, economic and political interests. The NWS provided an emancipatory space of innovative aspirations. The central question addressed by the speakers, respondants and the audience was whether the current concept of the 'State' is still capable of protecting the people’s right to self-determination in the 21st century.

During the summit, numerous stateless political organizations gathered to discuss the meaning, potential and obstacles that the concept of the ‘State’ carries, starting from their own unique experiences and perspectives and applying this view to the world in general.

Impassioned speakers spoke about aggressive nationalism and how it feeds exclusion and inequality, and together they found solidarity across the structurally different forms of oppressions they all face and continually resist. They questioned, examined and reimagined 'self-determination' and 'independence' in the free and expressive space of the NWS. They recognized that artistic thought is crucial for changing systems of oppression, boundaries and power.

Notable political representatives and activists considered how to reinstate the power back to the people, or rather, to include the marginalized and unrepresented 'Stateless States'. Through dialogue and discussions, the NWS participants shared their experiences of transgressing man-made boundaries and recreating spaces of freedom. Times of crisis were seen as opportunities for change and the audience was urged to co-create new communities by using "a collective vision", as well as employing the power and rights already protected by international and domestic law (although so rarely used in practice). 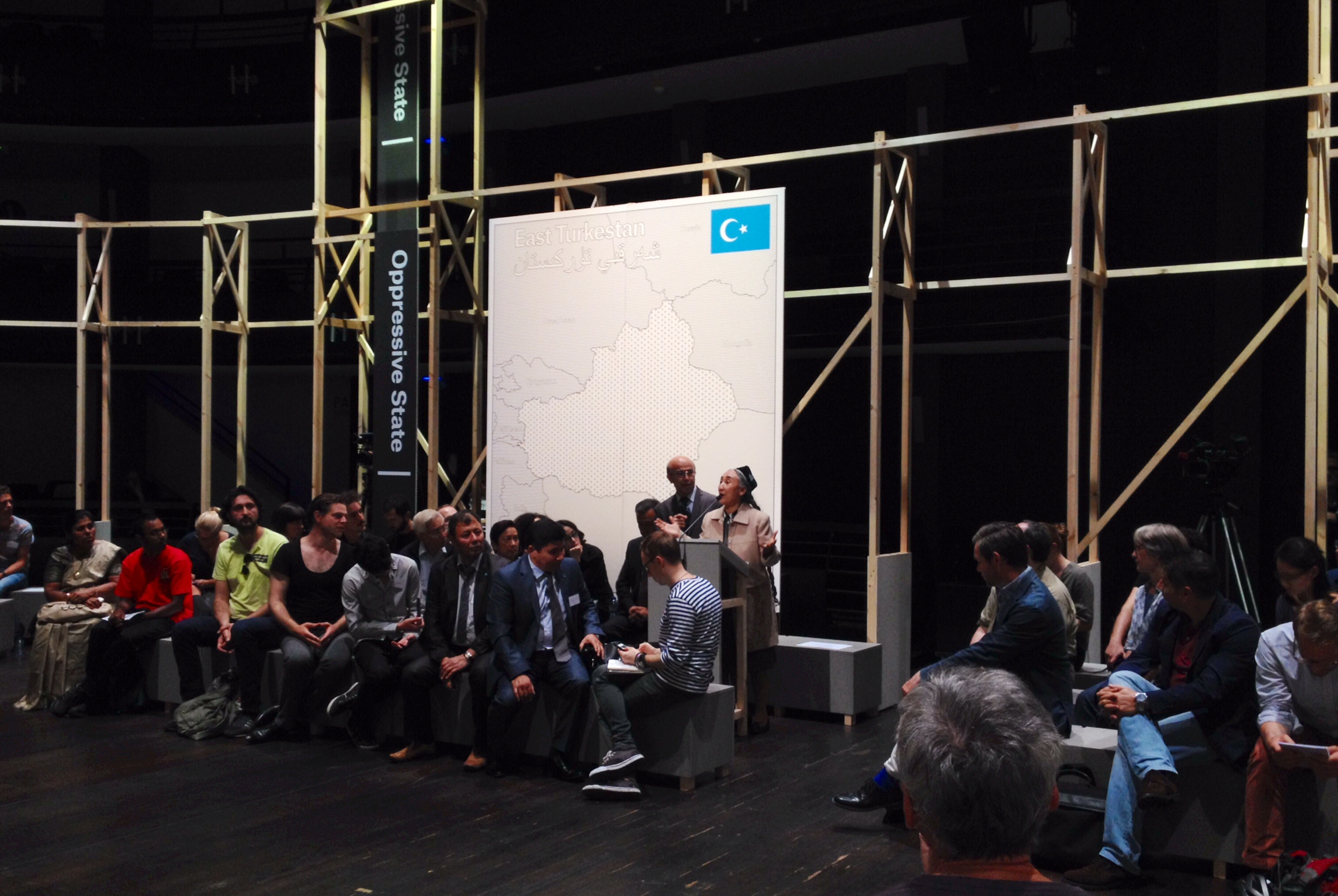 The first panel, "Oppressive State", aimed to explore the 'State' as an oppressive construct that relies on processes of exclusion and artificial creation of a homogenous community of people, through the denial of historical and cultural elements that could contest it. Speakers of the first panel, Ms Rebiya Kadeer (President of the World Uyghur Congress), Mr Karim Abdian (Ahwazi-Arab Alliance) and Martin Gustav Dentlinger (Captain of the Rehoboth Baster Community) looked at how this happens concretely through the repression of the peoples or communities that do not identify themselves as part of the national community and seek recognition of their civil rights, self-governance and in some cases even independence.

The second panel, “Progressive State”, with contributions from Mr Josu Juaristi (Basque journalist and Member of the European Parliament), Ms Coni Ledesma (National Democratic Front of the Philippines) and Ms Rebecca Gomperts (founder and director of Women on Waves and Women on Web) explored the dynamics of the internationalist progressive struggles for individual self-determination, by developing movements across 'borders' as a step towards the articulation of a progressive internationalist commons, for example, though the creation of a parallel State, which includes women, gay and transgender communities as fighters and equals. 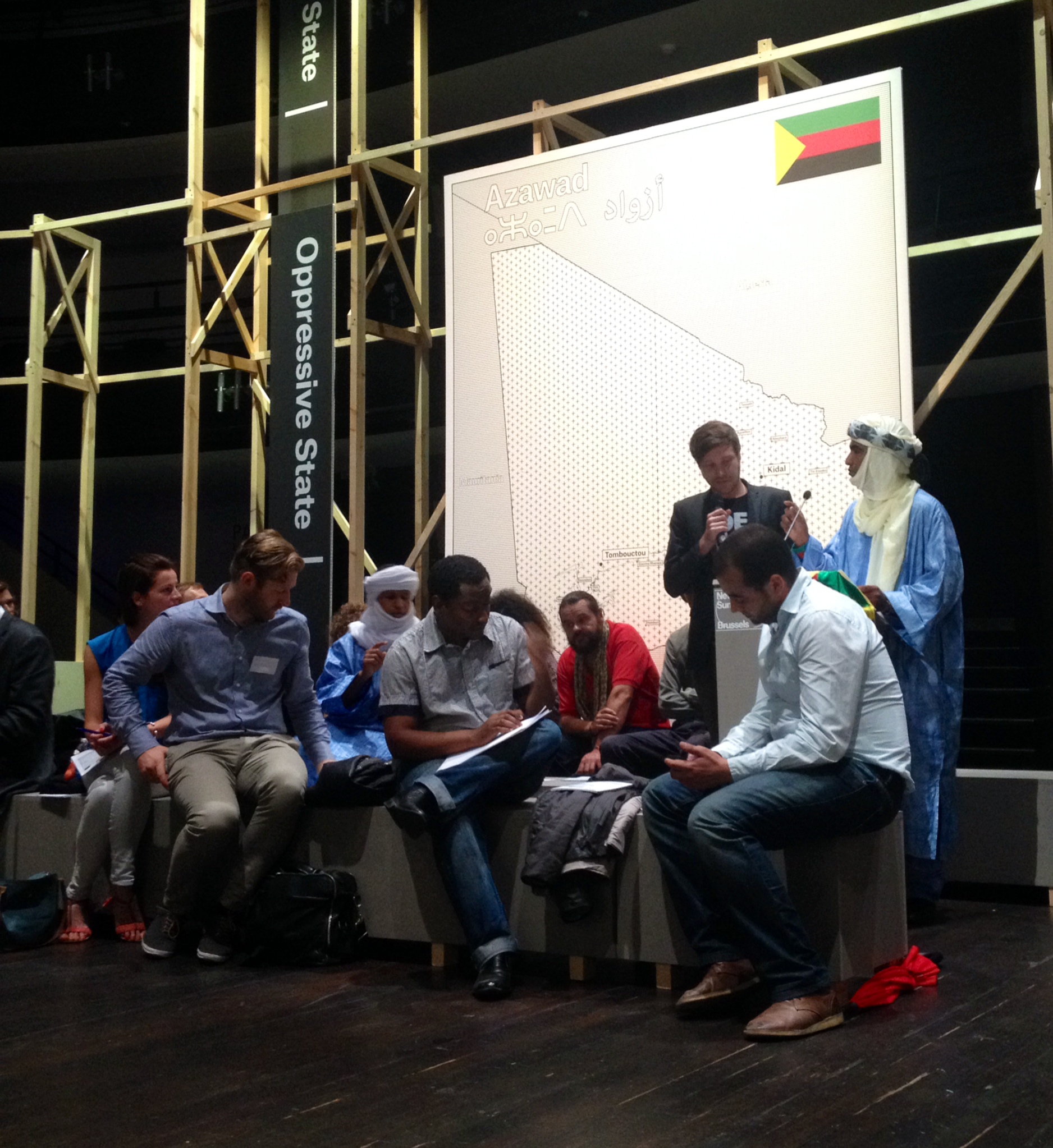 The third panel entitled “Global State”, Mr Nasser Boladai (Baluchistan People’s Party), Ms Ayda Karimli (Southern Azerbaijan Alliance) and Mr Adem Uzum (Kurdistan National Congress) tried to analyse the relationship between the State and globalisation, building solidarity beyond the State and a network of parallel States, and how the dialectic between the struggle for self-determination and common survival shapes regional movements.

The fourth panel looked at "New States" to understand which elements really characterize the concept in the 21st century and to what extent a 'State' can exist and function without formal international recognition. Mr Moussa Ag Assarid (National Movement for the Liberation of Azawad), Mr Simon P. Sapioper (Minister of Foreign Affairs of the National Government of the Republic of West Papua) and Mr Mohamoud Abdi Daar (Republic of Somaliland in Brussels), and a representative from the Women for Independence took the floor and introduced their claims to independence and liberation, coupled with the consequences of widespread unrecognition. 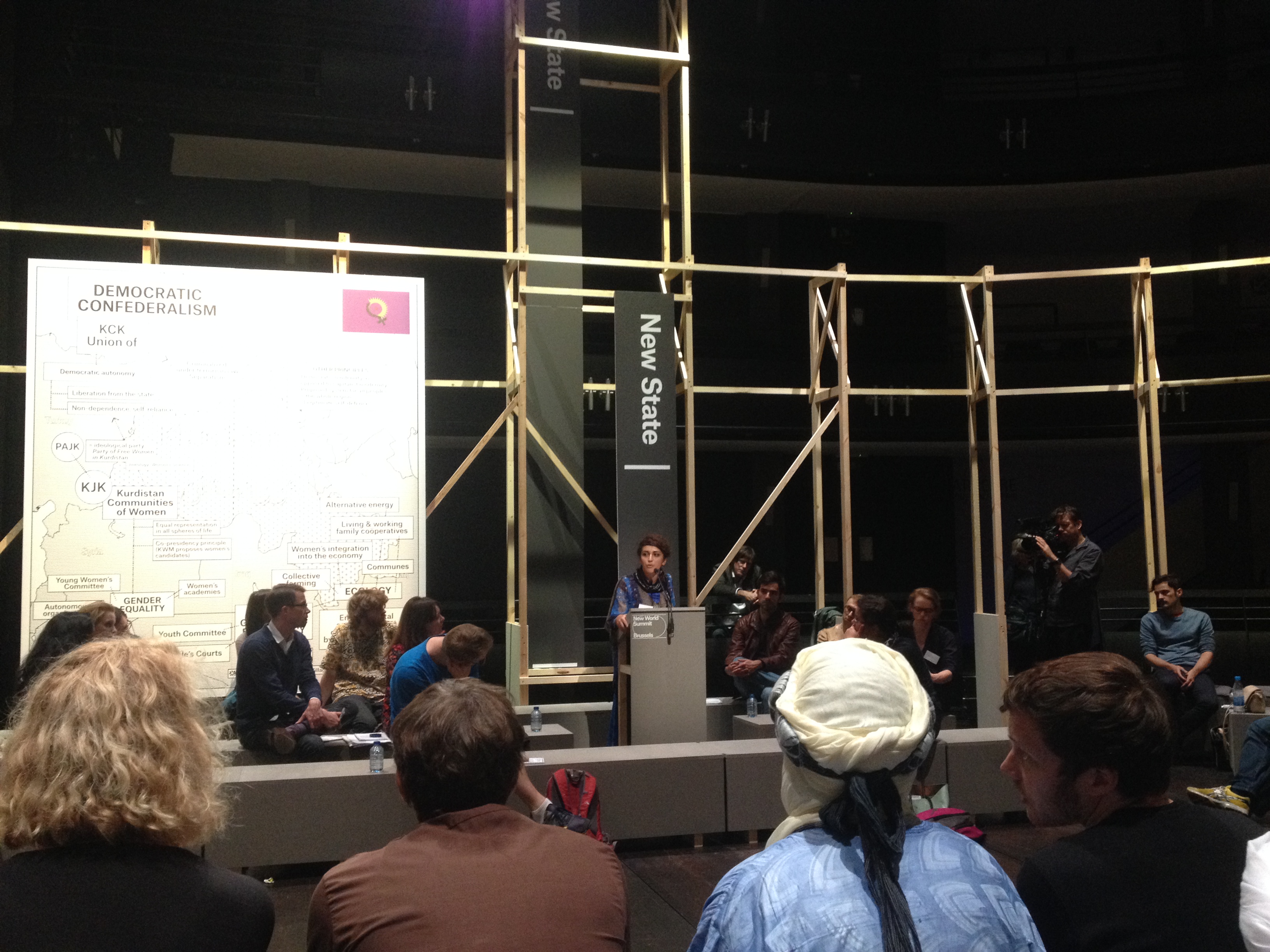 The last panel, entitled “Stateless State”, Ms Jonsdottir (Icelandic Pirate Party, spokesperson of Wikileaks) addressed the role of digital democratisation in developing post-statist models of democracy and the effects of the digital revolution on stateless internationalism. Ms Dilar Dirik, an activist of the Kurdish Women’s Movement, was the event’s last speaker. She explained how her movement fights for the liberation of the Kurds from State oppression, but also for the liberation of women from patriarchal shackles. For her movement, and for Democratic Confederalism (as an alternative to a nation-State solution), self-sustainability holds the key via 3 pillars: gender equality, radical grassroots democracy and ecology. For any sceptics in the room, she presented how this is not just a utopia, but a reality already implemented by Kurds; crossing borders to protect each other from common threats (such as IS), establishing autonomous organizations etc. She sees the concept of the 'State' as a replication of patriarchy, which must challanged with a strong commitment to gender equality as a prerequisite to freedom and democracy.

Once power is seen as a circle and not a pyramid, individuals can reimagine the possible. Once individuals and communities realize that "no one will give us our rights", new opportunities for cooperation, solidarity and consent can be envisioned, for there is "no freedom in isolation". 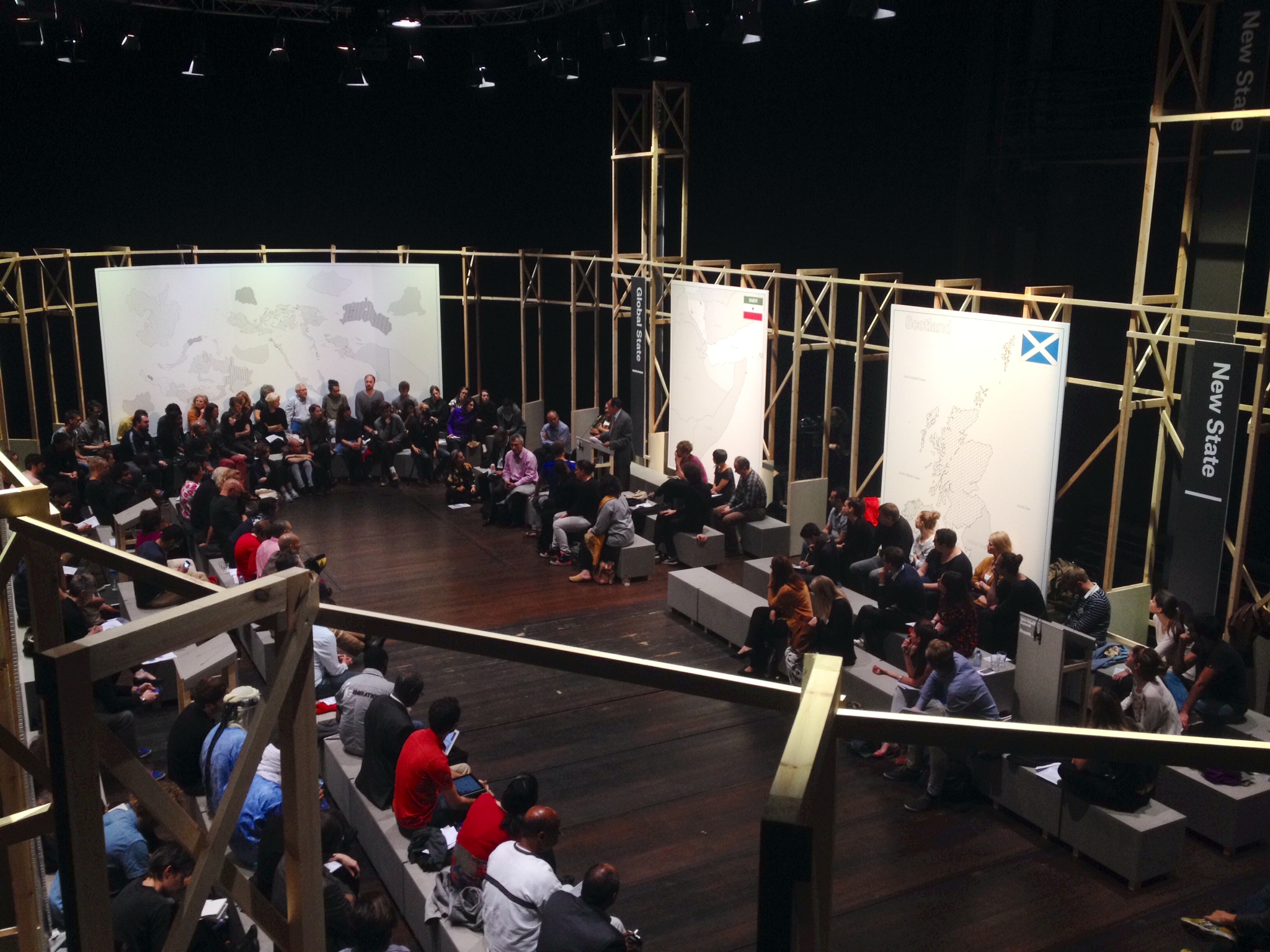