29 August 2014 - Following an invitation from the authorities of the Republic of Abkhazia to observe the 24 August 2014 early presidential elections, the Unrepresented Nations and Peoples Organization (UNPO) deployed a Limited Election Observation Mission to the largely unrecognized Black Sea state from 22 to 26 August.

Around 70 percent of Abkhazia’s estimated 130,000 registered voters cast their ballots last Sunday in 154 polling stations (three of which were outside Abkhazia, in Moscow, Cherkessk and Istanbul) across 33 electoral districts. With 50.57 percent of the ballots cast, opposition politician Raul Khajimba was declared the winner of the election after a first round, defeating three rival candidates. Khajimba’s main rival, security services chief Aslan Bzhania received 35.91 percent of the votes according to Abkhazia’s Central Electoral Commission (CEC), whereas Defense Minister Merab Kishmaria and former interior minister Leonid Dzapshba got 6.4 and 3.4 percent respectively. A number of voters voted against all four candidates.

UNPO’s short-term observers (STO) were among approximately 100 international experts and politicians invited to monitor Abkhazia’s electoral process and democratic progress. Election Day procedures in the ten polling stations (including the opening and closing of two stations) visited by the observer team were largely conducted in an accountable and transparent manner, with the polling station committees acting professionally and respecting democratic principles with regards to voting procedures. Moreover, the presence of political party representatives in all polling stations, as well as domestic and international observers in most stations, was an important oversight mechanism.

However, in advance of the election, some 22,000 ethnic Georgians, predominantly in Gali district, had been struck of the electoral roll and thus stripped of the right to vote on the grounds that the process by which they had acquired Abkhaz passports was illegal. As observed by the LEOM, in Gali – a district with a population of over 30,000 – only 303 voters were registered at the region’s only polling station. This so called ‘passportisation’ issue remains an important political question the Abkhazian authorities will have to deal with in the near future.

Following a press conference held at the International Press Centre in Sukhumi on 25 August 2014, UNPO General Secretary, who was among the LEOM delegates, had the opportunity to convey his congratulations on behalf of the members of UNPO to the newly elected president, and briefly exchange views on continued cooperation between UNPO and Abkhazia, who has been a member of the organisation since 1991. Prior to Election Day, UNPO engaged in meetings with Mr. Batal Tabagua, Head of the Central Election Commission, the institution responsible for all aspects of the elections, as well as with the Minister of Foreign Affairs, Mr.  Viacheslav Chirikba. 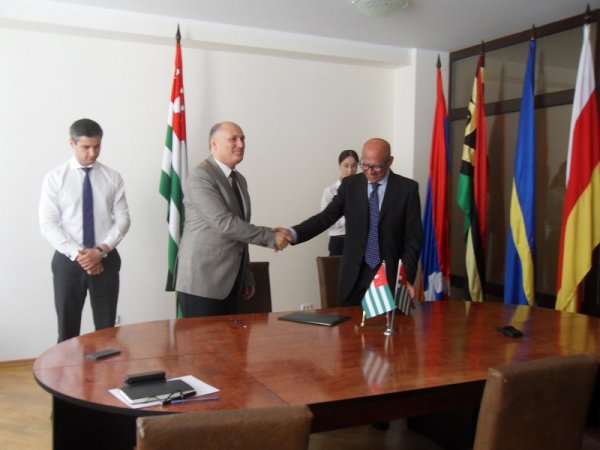 UNPO will release a report of the LEOM’s findings at a high-level event tentatively scheduled for the second half of October. The report will also be available for download and sent to relevant institutions.

The UNPO LEOM, consisting of the organisation’s General Secretary, a UNPO staff member, as well as a Member of the European Parliament, follows one conducted in 2011, when UNPO observed the special presidential election in Abkhazia held due to the unexpected death of then President Sergey Bagapsh.

Click here for a pdf version of this article.