Assyria: Appeal for a ChaldoAssyrian Safe Haven in Northern Iraq

The final litmus test for the Iraqi government's and the international community's genuine commitment to pluralism and democracy remains the preservation of the indigenous ChaldoAssyrian people of Iraq
Documento senza titolo
(AINA) -- A November 25 communique entitled "Appeal for a ChaldoAssyrian Safe Haven in Iraq" has once again highlighted growing international alarm over continued attacks targeting Assyrian (also known as Chaldean and Syriac) Christians in Iraq. Signed by 11 organizations spanning several countries in Europe and North America, the Appeal notes that "The systematic and sophisticated Church bombings of August 1, October 16, and November 8 have been supplemented by nearly daily reports of abductions, beheadings, burnings, and killings of innocent ChaldoAssyrian civilians." The Appeal continues "The continuing onslaught against the vulnerable ChaldoAssyrian civilian population is perpetrated with the specific intent of terrorizing the indigenous Christian population into leaving their homes."

The Appeal lists three urgent points of action including that the Iraqi government and the international community: 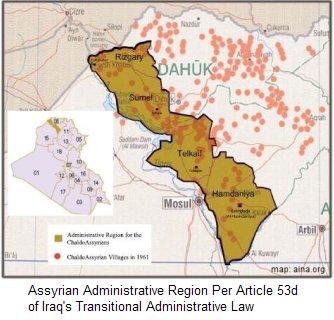 The need for a Safe Haven has been described as an "interim" step to counter the current period of general insecurity and the specific targeting of ChaldoAssyrians throughout parts of Iraq. According to one Baghdad resident, "scarcely does a day go by that an Assyrian Christian is not killed in Baghdad for no other reason than that he is an Assyrian Christian." The net result of the ongoing attacks, the terrorizing, and the series of Church bombings has been the oft-reported mass exodus of over 40,000 ChaldoAssyrians from Iraq (story). As one proponent of a Safe Haven noted, "the intention of an interim Safe Haven is to provide those people currently contemplating selling and leaving their homes an opportunity to stay in the country in a secure area defended by ChaldoAssyrians themselves." Failing to establish such a sanctuary as soon as possible will only eliminate the option of staying in the country for tens of thousands more Assyrians.

Assyrians have repeatedly noted that Assyrians themselves will guard the Safe Haven. There is concern about outsiders enforcing such an area. For example, there is concern that Kurds may want to use the general insecurity and intimidation felt by Assyrian villagers as a pretext for extending their occupation of non-Kurdish Areas. Other Assyrian leaders remain concerned about the perception that a Safe Haven enforced by foreigners would create animosity and tension with surrounding Iraqi communities. Still other worries include the concern that any other force would not have the commitment or stamina to guard the areas as Assyrians would. "A Safe Haven enforced by ChaldoAssyrians themselves with the legal support of the Iraqi government and the international community would resolve those lingering doubts and fears."

The Appeal also calls for the implementation of Article 53d of the Iraqi government's Transitional Administrative Law (TAL, English, Arabic), which calls for an administrative region for ChaldoAssyrians within the Nineveh Plain. The inclusion of ChaldoAssyrian administrative rights in the Nineveh Plain remains the major outcome of the October 2003 Chaldean-Assyrian-Syriac Conference in Baghdad sponsored by the Assyrian Democratic Movement (ADM) and the Assyrian Democratic Organization (ADO). Although the Iraqi people themselves through the Iraqi Governing Council (IGC) as well as the international community through the Coalition Provisional Authority (CPA) endorsed ChaldoAssyrian aspirations for administrative rights in the TAL, it is widely believed that this will necessarily entail a long-term political process.

As one observer noted, "There's already talk about some Iraqi groups wanting a 6 month postponement in the election. Even if the elections proceed later, there will need to be a constitution committee deliberating such agendas." The process, then, may be long and arduous. "We definitely need to remain engaged in the process till the end. However, that long-term political process does not adequately begin to address our immediate security concerns. The Safe Haven does just that." Another analyst added "The Safe Haven and administered area are complementary -- the only difference being one of timing. We need to do something now in order to preserve some 'facts on the ground' for our future administered area. If the territory of the Nineveh Plain is not now secured, it may become a moot point in the future if current trends and our mass exodus continue. Without it, the US and its alies, along with the Iraqi government would be furthering the agenda of the Kurdsih arm of Al-Qaeda, the Ansar Al-Islam."

This concern is indeed validated by the Washington Insitute's 2003 Report on Ansar Al-Islam which states: "In August 2001, leaders of several Kurdish Islamist factions reportedly visited the al-Qaeda leadership in Afghanistan with the goal of creating an alternate base for the organization in northern Iraq. Their intentions were echoed in a document found in an al-Qaeda guest house in Afghanistan vowing to "expel those Jews and Christians from Kurdistan and join the way of Jihad, [and] rule every piece of land . . .with the Islamic Shari'a rule." Soon thereafter, Ansar al-Islam was created using $300,000 to $600,000 in al-Qaeda seed money, in addition to funds from Saudi Arabia."

The Appeal is also noteworthy because it draws support from Syriac Maronite and Coptic organizations. The joint signing of the Appeal is another in a series signs of closer cooperation amongst communities recognizing that they continue to face similar and growing pressures and circumstances in the Middle East. For Maronites, the reasons run still deeper in that there is a greater recognition that there is a shared ancestry, language, religion, and Syriac heritage as well. For Copts and non-Christian minorities as well, there is recognition that ChaldoAssyrians in Iraq represent the first of a regional test case. A direct overt manifestation of this growing understanding was the participation of hundreds of leaders and activists consisting primarily of Copts, Lebanese Christians, and ChaldoAssyrians in the Middle Eastern American Convention (MEAC) on October 1, 2004 in Washington DC (AINA, 10-07-2004).

More recently on November 19 and 20, the Coalition for the Defense of Human Rights under the leadership of Fr. Keith Roderick brought together Maronites, ChaldoAssyrians, and Mandeans for a gathering in Washington DC. At that Conference, Mr. Ashur Yousip of the Assyrian Aid Society argued for greater reconstruction aid to help develop the Nineveh Plain. Mr. Robert Dekelaita of the Assyrian Academic Society outlined the growing pressures faced by ChaldoAssyrians and the need to establish a Safe Haven in the Nineveh plain. Mr. James Rayis, a prominent Atlanta based attorney and member of the Assyrian Universal Alliance (AUA), likewise emphasized the need for security and administrative rights in the Nineveh plain. Mr. Suhaib Nashi of the Mandean community highlighted the threats to the Mandean community in Iraq as well. Mr. Walid Phares of the World Maronite Union spoke to the general regional pressures impacting minority communities.

As one analyst noted, "The entire region is under pressure and yet faces potentially revolutionary transformation. The first test case for greater freedoms, democracy, and pluralism begins in Iraq. If the ChaldoAssyrians who opposed Saddam's regime for decades and cooperated with the overthrow of the regime do not regain their rightful place in the Iraqi mosaic, then that does not bode well for Maronites, Copts, and all other minorities in the future Middle East." It was exactly that sentiment that prompted Mr. Michael Meunier of US Copts and Ms. Nina Shea of Freedom House to call for a concerted effort by all of the communities represented at the MEAC to focus on the ChaldoAssyrian community in Iraq as the most at risk group.

The Appeal concludes by noting that "With reports that tens of thousands of ChaldoAssyrians leaving Iraq, there now exists the real possibility of the extinction of the indigenous ChaldoAssyrian people in Iraq for the first time in their 6700 year continuous existence. The final litmus test for the Iraqi government's and the international community's genuine commitment to pluralism and democracy remains the preservation of the indigenous ChaldoAssyrian people of Iraq." The establishment of a Safe Haven patrolled by ChaldoAssyrians will add a valuable option to those unable to safeguard their families but who still yearn to remain in Iraq until a better, brighter future evolves.