Below is an article published by IRA Mauritania:

The anti-slavery organization Initiative pour la Résurgence du movement Abolitioniste (IRA)organized a Gala Match on Saturday 20th April, at the Camara Soccer Field, at PK 10. This match, held as part of the IRA’s cultural and sports activities, brought together a selection of young members to that of the Peace Committee, made up of tenors of the IRA’s Youth.

Biram Dah Abeid, the IRA’s President, gave the symbolic go-ahead of this match under the cheers of members and executives of the organization who came en masse to support both formations. The selection led by the young members, much more athletics, dominated the whole game. The Peace Committee team, led by its captain Yacoub Diarra, was logically defeated by 4 goals to 0. Ahmed Sidi, Mbarek Vall and Mokhtar with two goals, were the kickers of that game.

This friendly match that ended on a high note sealed the entrance of young members in the IRA Mauritania. This was definitely a successful entrance of the abolitionist organization in Soccer. 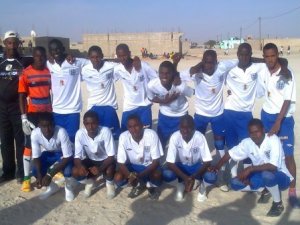