Dozens of people, mainly IRA-Mauritanie (Initiative for the Resurgence of the Abolitionist Movement) and the Observatory for Mauritania youth against social disparity militants and supporters, went out on the streets on Saturday 10th November [2012], to denounce the death of Souadou and demand the opening of an investigation. 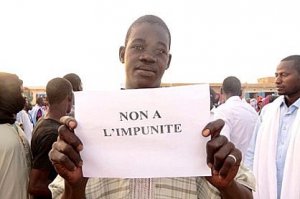 Women screaming at the top of their voice, “We are all Souadou”, were leading this demonstration named “March for civil rights in Mauritania”.

“We are here to say No to impunity, to slavery in Mauritania. We are here for justice, equality of Mauritanian citizens and the respect of human rights”, protested Khana Mint Mahmoud.

“We denounce the complicity of public power. We want to know the truth about Souadou’s death”, she added, fixing her headscarf.

Souadou lived in Hassi Tyour, near Legdeim located 25km from the town of Ouadane, in the north of the country.

Last Friday 2nd November [2012], she was found dead, in a well, at sunset. Immediately, it was declared to be a suicide. But, in an information note from the Executive office of IRA-Mauritanie, 3 days after her death, this human rights organization indicated that “this alleged suicide occurred after the master’s wife discovered an adultery relationship between Souadou and her husband.

“Souadou lived as a slave, in servitude. She has known rape and forced marriage. For us, she is another victim of slavery, a victim that went through mistreatment and abuse”, indicated Balla Touré, Secretary of Foreign Affairs at IRA-Mauritanie. “This is the time to denounce, to demand from public authorities the opening of an investigation in order for the authors of this murder to respond to their acts in a criminal court. It has been said that it is just a common case of suicide, something we refuse to believe.”

This march for civil rights in Mauritania left from the New youth center of Nouakchott at 17h30, with watchwords such as “we claim equal rights”, “our country is drifting away”, “No to impunity”, “the impunity of these slave masters is not acceptable anymore”. 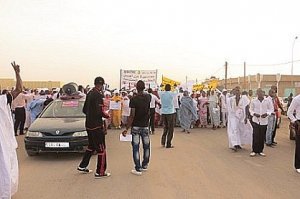