Representatives of the Baloch, Ahwazi and Azeri Turks were joined in a panel discussion at the UN Human Rights Council by Amnesty International and Minority Rights Group

Together with Minority Rights Group International, UNPO hosted an event on Wednesday, 14 March 2012 at the 19th Session of the UN Human Rights Council titled “Minority Rights in Iran.”  The event followed Monday’s report of the Special Rapporteur on the situation of human rights in the Islamic Republic of Iran to the UN Human Rights Council. During the interactive dialogue with Dr. Shaheed in the Council plenary, panelist and Baloch representative Ms. Monireh Sulemani delivered a statement on the rights of Iran’s minorities on behalf of the Nonviolent Radical Party. In order to further explore the issues briefly presented by Dr. Shaheed and Ms. Sulemani, UNPO and MRG planned this parallel event focusing attention on the human rights situation of ethnic, religious, and linguistic minorities in Iran.

Iran’s population includes a large number of religious, ethnic, and linguistic minorities. These groups are highly diverse, but share common experiences of economic marginalization, political repression and denial of even the most basic of cultural rights. As noted in the report of the Special Rapporteur, the Iranian government has been cracking down on dissent with increasing severity. While abuses against activists, journalists, and members of the political opposition have been widely documented and discussed, the relative severity and pervasiveness of abuses against Iran’s minority populations, though well documented by international NGOs and United Nations human rights bodies, tend to receive significantly less public attention. For example, one of the more striking elements of the government’s recent crackdown is the six-fold increase in executions in Iran over the last year. While this is a situation that affects Iran’s population as a whole, minorities are executed at much higher rates than Persians, and are often arrested, imprisoned and killed with even greater impunity due to the lack of reporting on these regions.

Mark Lattimer (Executive Director, Minority Rights Group) opened the event with a brief overview of Dr. Shaheed’s report, which drew attention to very serious violations of the rights of Kurds and Balochis, as well as noting violations against unrecognized religious communities such as the Bahá’í, who experienced “systemic and systematic” rights violations. Lattimer commented that many articles of the Iranian Constitution provide protection for minorities, and that the Iranian government had made very positive statements during a general discussion of minority rights in the Council plenary on the previous day. Nonetheless, Iran’s justice minister condemned Dr. Shaheed’s report, describing it as an unforgivable injustice. In the context of this very polarized debate, Lattimer noted that panelists would be looking in much greater detail at the reality of the human rights situation in Iran as experienced by minority communities.

According to Fakhteh Zamani (Director, Association for the Defense of Azerbaijani Political Prisoners), the struggles of Iran’s minorities remain unknownto the international community. Ms. Zamani drew attention to the situation of the Azerbaijani minority community in Iran, which, as with other minority communities in Iran has been subjected to racism and cultural, linguistic, and economic discrimination in law and in practice. Describing the protests surrounding Lake Orumiyeh as a recent example, Zamani explained that all peaceful demonstrations demanding rights and protection of environment in the region have been violently suppressed, with activists as well as students, journalists, and writers risk violations ranging from arbitrary arrest to death at the hands of Iranian security forces. In Southern Azerbaijan, Zamani noted, the mere act of speaking to her is a crime that can net someone a six month sentence.

Further complicating their situation, Southern Azerbaijanis experience cultural discrimination and racism in Iran, not only in person and in the workplace, but also frequently in the media. Protests following a particularly egregious cartoon comparing Azerbaijanis to cockroaches and suggesting that they should be exterminated received little to no attention from the international community, despite a brutal crackdown that resulted in thousands of deaths and scores of arrests.

In her presentation, Monireh Sulemani (Balochistan Peoples Party) spoke about the significant educational gap between Persians and ethnic minorities in Iran. Sulemani began by asking whether any members of the audience had, at the age of six, been forced to begin their studies in a foreign language to which they had no previous connection. As all education in Iran is exclusively and specifically in Persian, Sulemani described to attendees her first-hand experience with this situation, noting that it not only has a significant effect on failure rates for minority children, but also has a very personal impact: “being Baloch, my history and culture are very connected to my language, so when you reject the Balochi language, you are rejecting me as a person – I don’t have a sense of culture, a sense of history, a sense of belonging.” Schools in minority regions are very poor, and dropout and illiteracy rates in these regions are many times higher than the national average. This also has a significant impact on the representation of national and ethnic minorities in high-ranking government positions; in Balochistan, no Baloch has ever served as an ambassador or a minister.

Karim Abdian (Director, Ahwaz Human Rights Organization) drew attention to the situation of Iran’s Arab population, who live predominantly in the province of Khuzestan where they are subjected to mix of Persianization, forced migration, violent political repression, and economic exclusion. While Khuzestan is the source of at least 90% of Iran’s oil wealth, it is also one of the country’s poorest regions. Revenue from the oil extracted in the region is diverted back to the central government, and the jobs made available in the region by the oil industry are reserved almost exclusively for Persian workers who are brought in from outside the province for this purpose. Abdian noted that while Ahwazi Arabs have campaigned for their rights for decades, including participating in the 1979 revolution in hopes that a new regime would fulfill their aspirations, their rights have still not been fully realized. As in Balochistan, Arabs hold very few positions of authority in either government or private industry in Khuzestan. Abdian also noted the disconnect between minority activist movements and the green movement whose protests drew global attention following the disputed 2009 Presidential elections in Iran; these protests did not spread very widely to minority regions. According to Abdian, this signifies a need for greater understanding and awareness of minority struggles, as no popular protest movement will bring democracy unless it has the support of the country’s minority groups and is inclusive of their voices.

Antonia Bertschinger (Amnesty International) discussed Amnesty International’s view of minority rights in Iran, noting that while repression is a problem throughout Iran, it affects the country’s minority groups much more strongly. Bertschinger drew attention to one of the problems inherent in any discussion of minorities in Iran: census data. While the government does publish what it considers to be official data disaggregated by ethnicity, this data is decades out of date and is much disputed. Bertschinger continued her presentation with a discussion of the situation of Iran's Kurdish population, emphasizing in particular the multiple and intersecting forms of discrimination experienced by Iranian minorities.

Following questions from the audience, the panelists discussed the reasons why minority voices are often unrepresented in discussions regarding the promotion of human rights and democratic reform in Iran. Participants called upon states, NGOs and the international media not to ignore the minority regions of Iran, but to put forth efforts to investigate and report on their situation. Summarizing the discussion, Mr. Lattimer noted that movements towards democracy in Iran won’t be successful unless they include at least basic protection for minority rights. 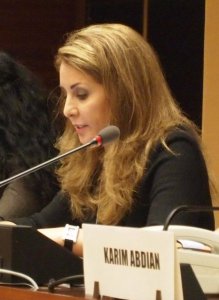