Hearing on Minorities and Unrepresented Nations in European Parliament

A high concern at the rights of unrepresented peoples and nations worldwide was expressed yesterday, 13 April 2011, at the Subcommittee on Human Rights hearing in the European Parliament, bringing together European authorities, international experts, NGOs and individual campaigners. 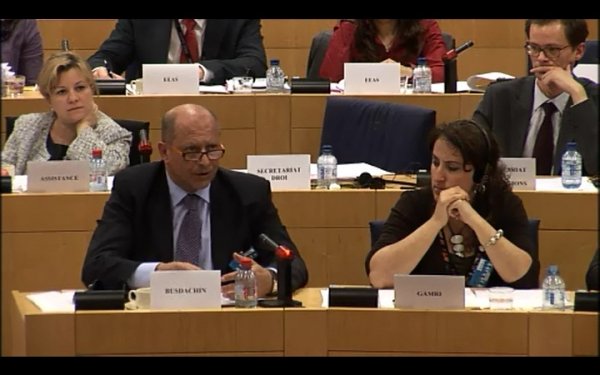 A hearing on minorities and unrepresented peoples, focusing on Balochistan and Assyrian issues, was held yesterday, 13 April 2011, in the European Parliament by the Subcommittee on Human Rights. The event, motivated by the general concern at the large number of ethnic minorities inadequately represented in international fora, assembled a broad audience of MEPs, representatives of the newly formed European External Action Service, international NGOs and individual campaigners.

Introduced by the chair of the Subcommittee, Heidi Hautala, Marino Busdachin, UNPO General Secretary, indicated how urgent it was to address the cases of Balochistan and Assyria, having in mind the continuous human rights violations in Pakistan and Iraq. He accented the enforced-disappearances and in-custody killings of Baloch activists in the Pakistan state that are today a common practice. So is torture, in spite of the ratification of Convention against Torture by Pakistan on 23 June 2010.

A revealing presentation was made by Attiya Gamri, member of the Assyria Council of Europe and adviser to the Iraq Sustainable Democratic Project. Attesting to the massive emigration problem, Attiya Gamri emphasized Assyrian aspirations for autonomy and for their own regional parliament: ’’We do not want to leave Iraq […] We […] do not want more or less than the other people.”

Andrzej Grzyb, vice-chair of the DROI Sub-Committee, affirmed the Assyrians’ cultural legacy and recalled the European Parliament resolution on repression of Christians all over the world.  He noted that the Lisbon treaty strengthens the EU power to perform humanitarian and technical assistance to different countries, mentioning however, the problem of unequal and discriminating distribution of humanitarian aid.

In the following discussion Frieda Brepoels MEP spoke of the pressing need to secure  social welfare and human rights and she also mentioned the important resolution [March 2011 – link]on the City of Kashgar that was the result of a conference organized in collaboration with the UNPO in January 2011. An ardent intervention was made by Vittorio Prodi MEP, stating that it is not time to stay indifferent but instead urging the international community to be proactive.

On a question from the chairwoman, Heidi Hautala MEP, Marino Busdachin, stated that there is not one solution to minority rights violations. But there is always a need to establish a dialogue and to negotiate in order to avoid any conflicts, but non-violence is non-negotiable. Heidi Hautala MEP concluded the session by saying that the Subcommittee on Human Rights would certainly continue working with the UNPO on minority issues.

Turning from the hearing, the Subcommittee examined the human rights situation in Laos in view of the upcoming general elections on 30 April 2011, including the rights of the Hmong minority, also represented within the UNPO.

Vanida Thepsouvanh, president of Lao Movement for Human Rights, unmasked the current situation in the authoritarian state of Laos and said that being invited to the Subcommittee on Human Rights represented a “glimmer of hope” to a people whose voices were seldom heard.  The constant imprisonment of people holding peaceful protests against the current government, continual discrimination of Hmong people, enforced-disappearances and tortures were strong reasons for the need of preventive measures.

Ulla Olsson, the EEAS representative, stated that within the EU-Laos dialogue framework, based on an Association Agreement, bilateral efforts are made to overcome the existing injustices. The first important outcome is the gradual transformation of the National Assembly into a working Parliament. In the last meeting in February 2011 Lao authorities offered EU officials to visit prisons in Laos to examine the situation for prisoners. Barbara Lochbihler MEP however raised the question of the existence of secret jails where political prisoners are said to be held in custody, something about which the EEAS did not know. Lochbihler also said it was time for the European Parliament to work on a new resolution on the situation in Laos, as the last one was passed in November 2009, and there was a need for the legislature to reaffirm its position.

Although the hearing proved that Assyrians, Baloch, Hmong and other minorities still face serious violations of their rights, it also offered some hope for the future as a number of MEPs stated that they will continue to work for these peoples and their rights and that this hearing would not be the last to be held on the issue of minorities and unrepresented peoples.