On Wednesday, April 7, 2010, Abdul Hamid Khan addresses the House of Lords in London, England on the Human Rights Violations by the Pakistan Government toward the peoples of Gilgit Baltistan.

On 7th April 2010, Mr Abdul Hamid Khan, Chairman of Balawaristan National Front (BNF) engaged in a debate in the House of Lords, London UK on the topic of human rights abuses in Gilgit Baltistan.

Mr Khan, speaking on behalf of the Gilgit Baltistan Democratic Alliance (GBDA), used the opportunity to address Honourable Baroness Emma Nicholson and distinguished guests in the House of Lords on the concerns of people of Gilgit Baltistan, located in northern Pakistan. His address included reports of forcible eviction and killings and outlined the reasons for rejecting the new Pakistani package as it represents a deprivation of freedom for the people of Gilgit Baltistan.  The implications of planned dams on the livelihood of people living in close proximity to the River Indus were also considered. Mr Khan concluded by recommending key steps for Great Britain to take to draw attention to these issues on an international stage. 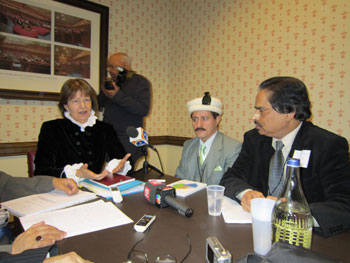 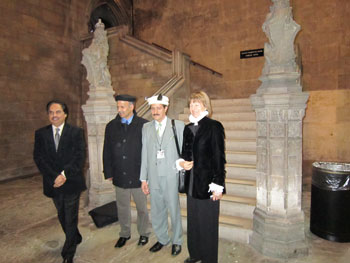 Below is the speech presented by Abdul Hamid Khan in the House of Lords or click here for a pdf version.

Pakistan has sought to hoodwink the people and the world by maintaining a facade of democratic rule since 1969 during General Yahya regime and then during Zulfiqar Ali Bhutto after 1971  and then made another fraud by terming it as LFO/Rules of Business in 1994. The local representative body called Northern Areas Legislative Council (NALC) was again re-named as per the Legal Framework Order of 1994 which also gives the same old powers to  the Minister for KANA and nothing for the local Chief Executive of the NALC.

Pakistan has widely propagated for the recent 5th Package and its fraudulent Elections for the so-called Legislative Assembly and Council of Gilgit Baltistan.

We the people of Balawaristan reject this new Pakistani package, because this will create more deprivation, lack of Justice and snatch our freedom than ever Pakistan wants to use this puppet Council and so-called Assembly as rubber stamp to endorse all the Pakistani demands and orders.

In February this year Pakistani occupation forces killed 3 innocent demonstrators in Chilas and killed dozens when they demonstrated against the forcibly eviction of their land to construct Diamar Bhasha Dam for the interest of Pakistani Punjab and to make strong presence of its forces and personnel of ISI, so to keep its control firmly along with the presence of Chinese Military presence.

China by taking leases of precious mines including copper, Gold and Uranium etc, by constructing Air Strips on the Road, Railways and Dams is creating serious problems to the environment, demography, geography and political dispensation.

After the announcement of the so-called package Pakistani intelligence agency the ISI killed dozens of local indigenous people in Gilgit with the evil intention to divide the people on sectarian lines before the arrival of Prime Minister of Pakistan, so no one could dare to  protest against the package.

1.    The indigenous people of this part are  facing serious loss of properties and life from the River Indus, which has not been taken in to account before India held Water Treaty with Pakistan in 1960 which  does not suits to a democratic attitude of any country.

2.   6  Mega Dams which Pakistan have planned to build in Gilgit Baltistan by force  by submerging half of the population of this disputed part, which bring drastic situation to the surrounding population as well as wild life and nature. 1960 Water Treaty does not allow Pakistan and China to destroy Gilgit Baltistan and to change its demography.

3.   By keeping in mind the disputed nature of this part (Pakistan Occupied Gilgit Baltistan) Pakistan should be refrained from constructing  6 Mega Dams (Diamar Bhasha Dam, Bonji Dam, Hanzel Dam near Gilgit City, Skardu Dam and Ghanchhe Dam) in disputed Gilgit Baltistan on Indus River as a consequences more than half of the indigenous population will be vanished completely. Besides displacement of more than  Million population out of total 2 million, the drastic change of weather would bring un-bearable crisis to the region in future.

Recently during UNHRC Session in Geneva, ISI broken houses of 3 leaders of GBDA in Gilgit City, including Adv. Ehsan Ali a prominent leader of GBDA who is also an ex president of Gilgit Baltistan Bar Council and another Adv. Wazir Shaif’s. This rampage continued and a third leader of GBDA Mr. Sultan Madad’s GBDA house was also broken, who had been invited for UNHRC Session Geneva. His passport was stolen along with other documents. This was the intention of ISI to keep the people of this disputed region out of UN bodies and international communities on one side and to harass the nationalists on the other. While Pakistan Army had announced a couple of months before that it has ended the interference in to politics, but in Gilgit Baltistan and PoK it has been increased in to dangerous level, where civilian government has no role to play.

It is the duty of UN and UK also to protect the lives, unique culture, language, property and dignity of the local people from the Pakistani occupation forces and its intelligence agency the ISI, which are the partners of USA and UK in the so-called war against terrorism.

Great Britain should take serious notice  of ISI's  new attempt to bring the disputed parts of Jammu & Kashmir, occupied Gilgit Baltistan and Chitral  as their war field  after Swat, so the people would be killed by ISI, terming them terrorists  till  their resistance power against the Pakistani occupation would be perished. This multipronged strategy of Pakistan Army has created serious threat to the lives, property and existence of the indigenous people, their culture, history, language and traditions. This evil strategy of Pakistan Army to use terrorism and fundamentalism against democratic and peace-loving people has also put the co-existence and tolerance of the world community on dangerous level.

Great Britain  should also consider the fate of non-Muslim communities of  (Kalash)  Chitral, besides Brelvi, Shia and Ismailia Muslims after Wahabi Sect Sharia laws are imposed, if Talibaan and its masters and financiers are not defeated. There is no common Sharia law in the whole Muslim world; but Taliban, Al-Qaeda and Pakistan Army want to impose Wahabi laws by force which is  unacceptable to us.

May I have your attention, I have the privilege  to make an announcement here,  I have been given the assignment by Gilgit Baltistan Democratic Alliance (GBDA) to represent them on international fora.

We are only comfortable with such Kashmiris, who have open and clear stand of freedom and independence and don’t  want to be a part of such party, whose agenda is ambiguous or revolves around religion or financial  or any other interest or prejudice instead of real nationalism.

We the people of Gilgit Baltistan do not have good experience with the leaders of J&K in the past. The worst example of 28th April 1949 fraud agreement with Pakistan in Karachi.
I request the leaders and people of J&K to help us whatever help we want and do not cross the limit of friendship like that the manner of Sardar Ibrahim and Choudhry Gholam Abbas who did fraud with the people of Gilgit Baltistan in 1949.

Yes, our issue is the same, we both the people of J&K and Gilgit Baltistan are on the same disputed boat, but our interest are different in many fields. We the people of Gilgit Baltistan want independence from the clutches of Pakistan and do not want to fall in  the hands of Kashmiris for another slavery. We want equal partnership and we do not want to lose our identity as Gilgiti Balti and Chitrali for Kashmir. Kashmir is one part, Jammu is another, Ladakh, Gilgit, Baltistan, Chitral and Shenaki Kohistan are another truth. Being here in UK and Europe nobody wants to give sacrifices for another. If the name, culture, tradition and politics of Kashmiris are imposed, that is impossible for us to accept . If, Kashmiris change their habit and accept other nationalities like Jamwal or Ponchis, Mirpuri, Gilgiti, Balti, Chitrali and Kohistanis, which are the strongest realities, then a common system can be stepped.  If Kashmiris want to demolish our culture, identity and history in the same manner  what Pakistanis have been doing for 63 years, that will never allow us to be united. Don’t consider my words as harsh or opposition or conspiracy or the dictation of someone. Today I am compelled to elucidate the current behaviour of many Kashmiri leaders, who want to impose their own agenda on the people of Gilgit Baltistan by mere claiming over it. This is the main reason that we some of the friends of the people of J&K are facing inner problems because of our Kashmir stand.

I appreciate the sincerity and sympathy of honourable Emma Nicholson, who have chosen the name of Princely States instead of imposing Kashmir, which can lead us toward a solution in near future. Unless and until we do accept all the values of each and every princely state, the goal of freedom will not be visible at any distance.

We appeal the government of UK to persuade China not to involve itself in the occupation process of Balawaristan (Pakistan occupied Gilgit Baltistan) by taking lease of precious mines including copper, Gold and Uranium etc), by constructing Railways, Roads and Dams to change its environment, demography and geography on one side and export and import WMD on the other.
We also appeal to China not to construct any secret tunnel and Airstrip on KKH, which will be harmful to the region.

We also appeal to United Kingdom, European Union and United Nations particularly to put pressure on China and Pakistan to withdraw their forces from  Gilgit Baltistan .
Instead  of playing new Package tricks, 2 million people of this disputed region could decide their future without China and Pakistani interference by a  free and impartial referendum or Election for a constitutional Assembly under the supervision of the UN according to its resolution of 13th Aug. 1948. This is the only solution to avoid any future conflict between, Pakistan, India, China, Russia, USA or Europe.