Crimea After the Elections: Mustafa Jemilev Informs European Parliament of Situation in Crimea 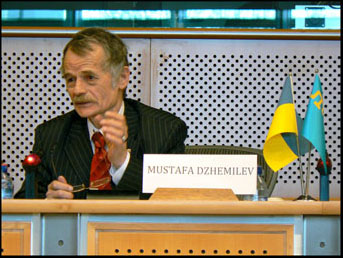 Leader of the Crimean Tatar people and former Soviet prisoner for fifteen years, Mr. Mustafa Jemilev, concluded a hearing in the European Parliament on 17 March 2010. The hearing provided assembled press, parliamentarians, and civil society with a first-hand perspective on the situation in Crimea following Ukraine’s Presidential elections this year and deeply held fears for the rights of the Crimean Tatar people.

In his speech Mr. Jemilev pointed to the necessity to include the Crimean Tatar issue in the agenda of the EU-Ukraine Association Agreement. He criticized the appointment of Anatoliy Mogilev as Ukraine’s Interior Minister, citing private conversations in which the former police chief expressed a promise “to ‘clean’ all the authoritative bodies [of Crimea] from the Crimean Tatars.”  Mr. Jemilev concluded by calling on the European Union to “facilitate rehabilitation and development of one of the European peoples…which…is now on the verge of [the] loss of its linguistic and cultural identity.”

Mr. Leonidas Donskis MEP – sponsor of the event and himself a committed campaigner for human rights – had opened the hearing by noting that “Mr. Jemilev represents one of the most important and brightest trends in Soviet dissent – namely nonviolent peaceful civil rights activism.  He has an extremely positive and wise stance and an understanding of political oppression and persecution.” 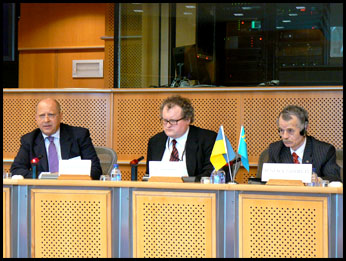 In a written message, Ms. Heidi Hautala MEP, chairwoman of the European Parliament’s Subcommittee on Human Rights expressed her belief that the “EU has a clear role to play…[and] should actively assist all sides to conclude legal settlement on the rights of the Crimean Tatars.”

Mr. Marino Busdachin, General Secretary of the UNPO, noted in his introductory remarks that the protection of Crimean Tatar rights must be “one of the first commitments of this parliament [and] – a first obligation of the new government of the Ukrainian Republic”.  Mr. Busdachin added that UNPO would stand in support of the European Parliament, and was ready to make the first steps to nominate Mr. Mustafa Jemilev for the Nobel Peace Prize.