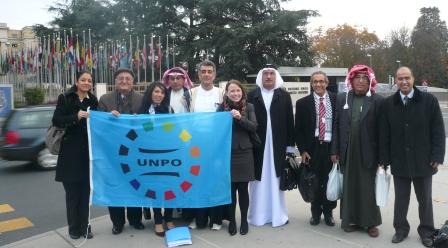 On 12 and 13 November 2009, five Iranian groups were represented at the Second Session of the Forum on Minority Issues - the Ahwazi-Arabs, the Kurds, the Baloch, the Azeri-Turks and the Lur. Their attendance was facilitated by the Unrepresented Nations and Peoples Organization (UNPO) who is committed to offering nations and peoples an entry point into international fora.

The session was based on the theme of “Minorities and Effective Political Participation” and representatives utilised the platform to identify obstacles to their involvement in political processes and offer recommendations for best practice to improve their situation. Delegates from Iranian groups wore traditional dress to represent the diversity of Iran’s ethnic, cultural and historical composition.

Dr. Alireza Nazmi Afshar, Director of the Iranian Turks Studies Center spoke under the agenda item for ‘Conditions required for effective political participation.’ He highlighted that Iran’s ruling elite predetermines electoral outcomes by tightly controlling who can run as a candidate and excluding representatives of ethnic groups from the process. He suggested that “change must happen at both the structural and policy levels” recommending constitutional modifications to promote a ‘civic republic.’ This would advance democratic society and give greater fiscal and legislative autonomy to ethnic groups.

Monireh Sulemani of the Balochistan Peoples Party identified that Balochistan faces problems of underdevelopment and poverty with some of the worst UN indicators for life expectancy, primary school enrolment and adult literacy in all of Iran. She argued that widespread discrimination in politics represent a violation of Article 19 of the Iranian Constitution.   The Balochistan Peoples Party advocates a participatory structure of government under which minorities enjoy the same rights as the majority group, which involves transforming the current centralised structure to a federal system with common institutions. Ms Sulemani stated that the Baloch nation must be recognised within its boundaries and given greater autonomy for national sovereignty.

In support, Karim Abdian of the Ahwaz Human Rights Organization stressed the need for a decentralisation of power and the establishment of a local Ahwaz representation under a federal system of governance.  This should involve free and fair elections allowing the involvement of Arab-constituted political parties. He stressed the need for Iran to have more than one national language and campaigned for greater autonomy for ethnic groups where all ethnicities have right to introduce their own candidates without government interference.

UNPO welcomes the opportunity for dialogue with Iranian authorities however regrets the Iranian Permanent Mission’s unconstructive response to issues raised by the minority groups during two interventions to the Forum. The Mission accused delegates of making ‘baseless allegations’ on ‘totally irrelevant issues’ and suggested UNPO representatives held ‘fake names and titles.’ These statements further confirm Iran’s failure to take seriously appropriate measures to address issues facing Iranian minorities and represent a distraction from the pertinent issues brought to the Forum.

The independent expert on minority issues, Ms Gay McDougall will now compile contributions from the Forum to develop recommendations to report to the Human Rights Council.  She thanked the delegates suggesting that no one country had found a solution to the lingering problem of political participation. In her final remarks, Ms McDougall concluded, ‘Politics count, representation matters and policy makers make all the difference.’

A full UNPO report on the Forum is forthcoming which will include statements impacting on other UNPO members including the Hungarian Minorities in Romania, Batwa, Assyria, Khmer Krom, Montagnards, Sindh, Iraqi Kurdistan and Iraqi Turkmen.