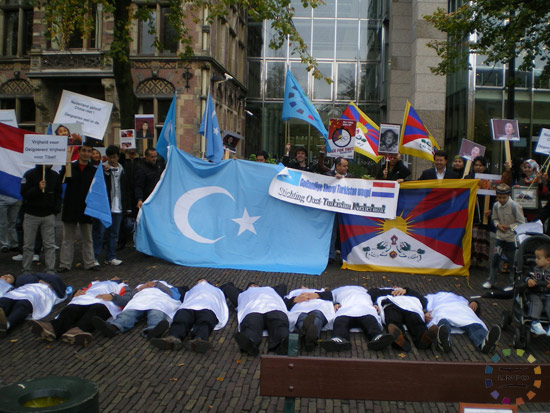 Today [12 November] the EU Presidency on behalf of all member states condemned the execution of nine Uyghurs in East Turkestan for their roles in this past summer's protests in Urumqi.

Below is a statement published by the Swedish Presidency of the European Union:

The European Union condemns the recent executions of nine persons in Xinjiang following the violent protests in Ürümqi on July 5-7, 2009.

The EU respects China's right to bring those responsible for violent action to justice but reaffirms its longstanding opposition to the use of the death penalty under all circumstances. The EU also recalls that in case the death penalty is maintained, internationally recognised minimum standards must be respected. These include all possible safeguards to ensure a fair trial and adequate representation.

The EU reiterates its concerns about the conditions under which the trials were conducted, especially with regard to whether due process and other safeguards for a fair trial were respected. The EU calls on China to review urgently the cases of those who remain under sentence of death for their alleged involvement in this year's unrest and for their sentences to be commuted.

The EU continues to call on Chinese authorities to abolish the death penalty completely and, as a first step, to establish a moratorium as urged by the United Nations General Assembly in its resolutions 62/149 and 63/168.

The Candidate Countries Turkey, Croatia* and the former Yugoslav Republic of Macedonia*, the Countries of the Stabilisation and Association Process and potential candidates Albania, Bosnia and Herzegovina, Montenegro and the EFTA countries Iceland, Liechtenstein and Norway, members of the European Economic Area, as well as the Republic of Moldova align themselves with this declaration.

* Croatia and the former Yugoslav Republic of Macedonia continue to be part of the Stabilisation and Association Process.