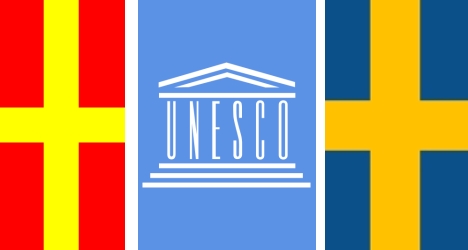 The UN Educational, Scientific and Cultural organization has designated the Skånska dialect as a ‘threatened language.' This offers support to members of the Scania Future Foundation (Stiftelsen Skånsk Framtid) that their dialect is a language and offers support to their cause of adding their language to Sweden’s list of protected minority languages.

Below is an article published by The Local:

The Scanian ('Skånska') dialect of southern Sweden has landed on Unesco's list of threatened languages, much to the exasperation of Swedish linguists.

“There are neither linguistic nor practical reasons why Scanian should be counted as a language,” Carl-Einar Lundbladh, head of the Dialect and Place-Names Archive (Dialekt- och ortnamnsarkivet, DAL) in Lund, told the Expressen newspaper.

But members of the Scania Future Foundation (Stiftelsen Skånsk Framtid), are thrilled with the Unesco designation, which adds support for their contention that the the Scanian dialect is a language, and an endangered one at that.

They want to see 'Skånska' added to the list of Sweden's protected minority languages.

Yet no one knows exactly why, “Scanian”, which scholars consider a Swedish dialect, is now clearly listed on Unesco's interactive homepage as “unsafe”.

Lundbladh and Ulf Teleman, Professor Emeritus at the Institute of Nordic Languages, are in agreement as to why Scanian may not be considered a language.

Every language should have a written equivalent, which Scanian lacks. Additionally, a language should be sufficiently distinguished from other languages – in this case, Swedish.

Lundbladh insists that he has never seen any material which would even facilitate a qualified comparison between Scanian and Swedish.

It is unclear, for instance, which of the Scanian variants could be considered as norms for the language.

“People don't see the use in it. So that work seems fruitless and surprising because I just can't see any reason to waste effort on it,” Lundbladh told the newspaper.

Professor Teleman agrees, however, that Scanian and other dialects are worth preserving.

“Part of a person's identity is in the way they speak. People think its charming when they meet other people from different parts of the country,” he told Expressen.