UNPO Press Release on Kadeer's Hearing at the European Parliament 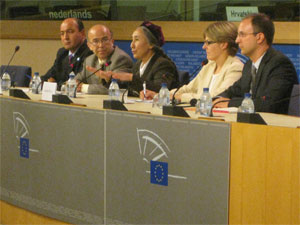 During the subsequent Press Conference, Ms. Heidi Hautala MEP supported Ms. Kadeer’s desire for an independent investigation on the events of July 2009 and confirmed that human rights in China will remain a permanent topic on European Parliament’s agenda. Ms. Kadeer answered questions about China’s unfulfilled promises on East Turkestan autonomy and the ongoing crackdown on Uyghurs since the Urumqi incident. She restated the Uyghur's desire to engage in dialogue with Beijing as part of their commitment to building peace and stability in a secular East Turkestan.

For the Video of the Subcommittee Session, please see:
http://www.europarl.europa.eu/wps-europarl-internet/frd/vod/player?eventCode=20090901-0900-COMMITTEE-DROI&language=en&byLeftMenu=researchcommittee&category=COMMITTEE&format=wmv

Ms. Kadeer was jailed for six years because of her nonviolent activism on behalf of Uyghurs and many of her children that remain in East Turkestan have been the target of retribution. Her life and struggle has been documented in a film, ‘The 10 Conditions of Love’ and Ms. Kadeer was twice nominated for the Nobel Peace Prize and was awarded the Rafto Memorial Prize for Human Rights in 2004.

UNPO is an international, nonviolent, and democratic membership organisation. Its members are indigenous peoples, minorities, and unrecognised or occupied territories who have joined together to protect and promote their human and cultural rights.

WUC is an international organization representing the collective interests of the Uyghur people, both in East Turkestan and abroad. Its objectives are to promote democracy, human rights and religious freedom for the Uyghur people, through peaceful, nonviolent, and democratic means.

For a copy of the UNPO Document on Human Rights Situation of Uyghur Ethnic Group, please click here .